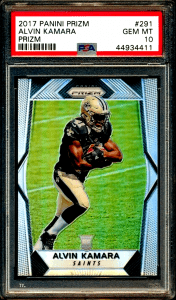 Kamara and the Saint’s air raid offense were a match made in heaven as the offense relies heavily on short passes out of the backfield… a running back with good hands is a MUST.

In his second year in the league, Kamara showed he had a knack at finding the end-zone running for 14 touchdowns to go along with 4 receiving touchdowns, and again the value of Kamara rookie cards jumped!

Let’s take a look at the top Alvin Kamara rookie cards from an investment point of view.

Here is the Kamara rookie card for collectors who want a great ROI without spending a ton of mulla (as is the case with most Prizm rookie cards).

The 2017 Kamara Prizm rookie card shows the scatback jitterbugging his way downfield with both hands wrapped tightly around the pigskin.

Even though the base card is ideal for value investors those with a larger bankroll can spend more money via the high-end Prizm parallels (i.e. Prizm Black Finite). 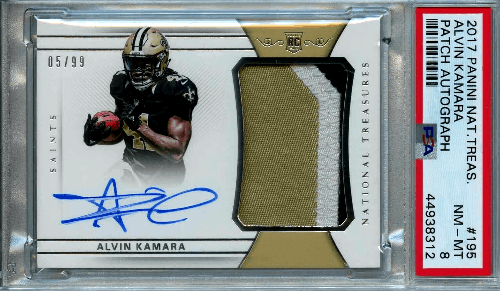 Numbered #195 the card shows Kamara running with the rock in the black Saints jersey. His name (Alvin Kamara) is plastered at the bottom left while the patch is placed on the right-hand side. 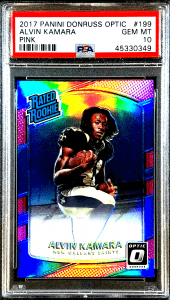 The Kamara Optic card is a good option for mid-level investors betting on a couple more big years from Mr. Kamara.

Numbered #199 the card shows Kamara with the football securely gripped in his right hand and his right knee held high as if he is getting ready to juke an opponent out of their socks… we also get a good look at his face as he is not wearing a helmet.

The reverse of the card reads “Working after practice with Pro-Bowl Quarterback Drew Brees helped to speed up Makaras’s development during OTA’S. He’s really good about just working with me the Rookie Running Back said (in regards to Brees).” 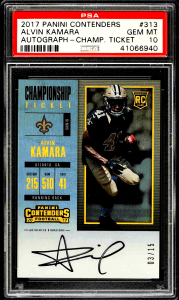 Numbered #313 the card shows Kamara running with the football while rocking one of the best home uniforms in the game… black top gold bottoms… doesn’t get much better than that bruh!

The Kamara Contenders rookie card also features a slick autograph along with Championship Ticket graphics (or playoff ticket depending on the variation).

The reverse of the card reads “With a gold grill that would make the sun and some of New Orleans’ most famous rap artist jealous, Kamara beams brightly after reaching the end-zone. Grouped with sure-fire Hall of Famers Adrian Peterson and Mark Ingram in the Saints backfield, the shifty Kamara promises to generate plenty of excitement in the BIG EASY.” 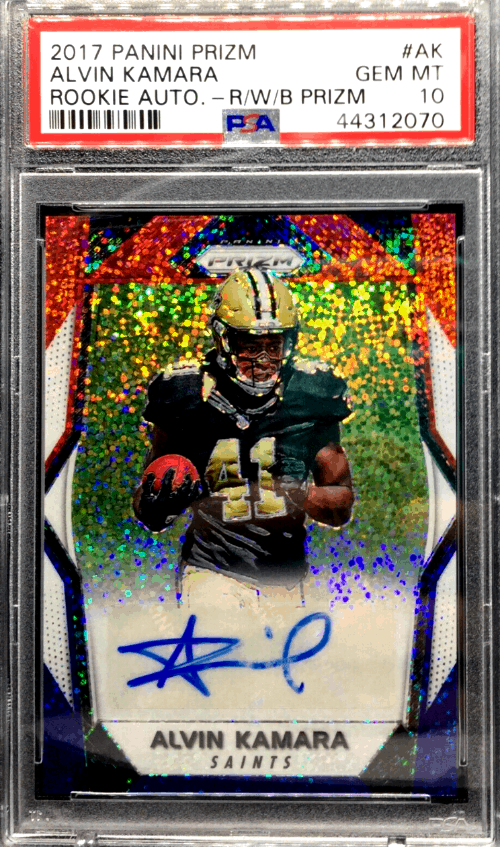 Kamara rookie cards can usually be had anywhere between $30 to $150 in high grades… some of the higher end cards i.e. National Treasures will go for over $150.

If you have an Alvin Kamara rookie card and would like an estimated value please email us a couple of photos to value@goldcardauctions.com

Thinking about buying an Alvin Kamara football card but are on the fence? Email us at advice@goldcardauctions.com to get a second opinion in regards to the purchase…. remember we are here to help 🙂

Also, hit us up via DM on the GoldCardAuctions Facebook Page.

If you are looking to purchase an Alvin Kamara rookie card but would like some advice please email us at advice@goldcardauctions.com. 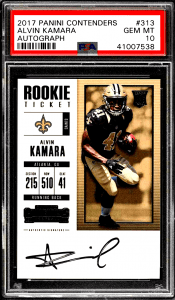 Alvin Kamara rookie card values should steadily rise over the next few years as he closes out his prime.

Buying a few of his best rookie cards are not a bad thing and you have the added bonus of a possible Superbowl ring as the Saints will again be one of the Superbowl favorites.