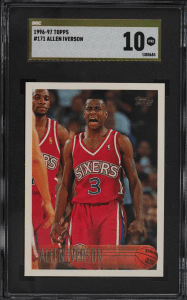 Whether you love him or hate him, ‘The Answer’ was undeniably one of the best players of his era, from being named as the Rookie of the Year in 1997, to the NBA MVP award he received in 2001.

A controversial figure during his decade with the 76ers, he appeared for the Denver Nuggets, Detroit Pistons, and the Memphis Grizzlies respectively, ending his career with Bestikas in Turkey.

Here’s the lowdown on Iverson’s various rookie cards, including a checklist and an investment report for a trio of his best versions.

Here are three of the best AI rookie cards for investment purposes.

The key Allen Iverson RC, the 1996 Topps is glossy, while there’s a valuable foil NBA edition (/50) which is often mislabelled as a Chrome card. It’s a good entry-level piece. There’s also the Topps Chrome, which is typically more valuable. They all have the same number (#171) but the Chrome is rarer and has a Refractor parallel.

Centering issues hold the majority back from higher grades, while the image sees Iverson in a typically emotive display. The quote on the back reads;

“Allen’s stats say plenty, but not as much as this nod from Princeton Coach Pete Gillen; “This kid is ridiculous. He’s lightning in a bottle. At times he looks like Gretzky (Read: Wayne Gretzky Rookie Cards) on ice. He could go through a keyhole and not even get his hair messed up. It’s a joke.” 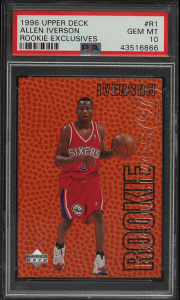 With a background that mimics the color, feel and shape of a basketball, the 1996 Upper Deck Rookie Exclusives is a unique entry-level card.

The image shows Iverson mid-dribble, although his Sixers jersey does clash with the background.

The quote on the reverse has a couple of questions and some basic info;

“Iverson enters the league as the number one overall pick of the 1996 NBA Draft. We tossed a few questions his way during the second week and this was his response;

Q. Is anyone serving as a special mentor to you in your rookie season? A. Working with “Mo” Cheeks has been great. He has been through this before. Everything Maurice tells me on the court, nine times out of ten it works. It’s just been great working with him.

Q. Which four NBA players would you pick to run with in a pick-up game? A. Jerry Stackhouse, Derrick Coleman, Clarence Weatherspoon and Mark Davies.” 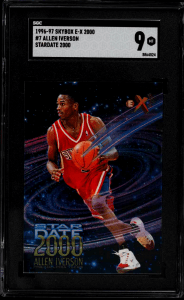 If you’re in the market for a mid-range option, a PSA 10 grade (Read: Beckett vs PSA) of the base E-X2000 should be on your radar. It’s cheap when you factor in the multi-layered design, which includes a foil border and blue skies in the background.

While there’s no quote on the reverse, there is a white Credentials parallel numbered to 499, as well as various Insert options. The Credentials card is up there in terms of rarity and expensiveness, and can sell for over four figures.

The range of editions, rarity, and design of the E-X2000 make it one of the more interesting Iverson rookie cards on the market, and a decent prospect if you’re hoping to invest in his rookie cards.

There are 17 Allen Iverson rookie cards (along with numerous parallels) which we’ll list below;

The value of his cards should steadily rise along with all high-end NBA rookie cards as the NBA card market is set to explode.

If you would like an estimated value of any of your Allen Iverson RC please send us at minimum two photos (front and back) to value@goldcardauctions.com.

AI was always destined for greatness from the moment he first joined the NBA. A star quarterback and point guard in his youth, he was named as the Rookie of the Year in 1997, and never looked back.

His natural athleticism and shooting abilities were amazing, though he was accused of selfishness during the majority of his early career. Nevertheless, a spot in the Pro Basketball Hall of Fame beckoned in 2016, and he’s seen as a prototype for many modern players. Even LeBron (Read: The Best LeBron James Rookie Card) admits that he’s “pound for pound, the greatest player ever.”

A case of what if, ‘The Answer’ is sadly lacking when it comes to NBA Championship wins. He’s still a Philly icon, and he very nearly dragged his team all the way across the finish line in 2001. In the end, he had to settle for being named as the NBA’s Most Valuable Player in the same year.

We’ve listed a pair of high-end Fleer options which undoubtedly make for a good investment, although we’d advise to look for PSA 10 copies of the Rookie Sensations. As well as being some of his most popular RCs, they’re also amazing to look at, as late 1990’s cards took liberties with designs that went all out with crazy colors.

The Topps Chrome and E-X2000 are also great investments if you’d prefer a more traditional card, with the former preferred if you’re aiming for the best ROI over the next few years. After all, his cards are relatively underpriced considering his talent, profile and achievements.