Alexis Lafreniere (10/11/01) is a talented Canadian LW who is a former captain of the Rimouski Oceanic of the Quebec Major Junior Hockey League.

He’s an NHL prospect, selected first overall by the New York Rangers in the 2020 NHL Entry Draft. He is highly rated due to a combination of speed and power and has an eye for goal.

The reason for his selection as the first overall pick?

Lafreniere led the QMJHL with 77 assists and 112 points and for the second straight season, was awarded the QMJHL MVP, QMJHL Personality of the Year, and Canadian Hockey League Player of the Year awards.

Here’s a rundown with the top three Alexis Lafreniere rookie card options, card info, and investment advice if you’re interested in picking one up before the season starts.

There’s a mix of Lafreniere RCs, split between his time in Canada and newer options following his move to the NHL. 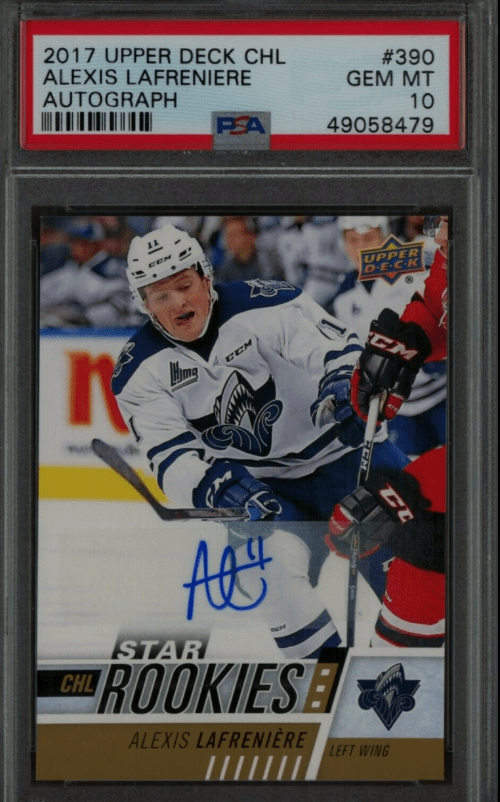 First up is a Canadian card released during the 2017-18 season.

The Upper Deck CHL Star Rookies RC shows Lafrenière in his Rimouski Océanic gear, with a close-up action shot of the player as he battles for the puck. You can see the concentration etched onto his face, as his tongue hangs out.

A large, bright card comes with a few rare parallels, including serial numbered versions listed below. If you don’t mind a CHL Lafrenière card, it’s a great early option.

Fast-forward to the 2020-21 season, with Lafreniere signed by the Rangers. The 2020-21 Upper Deck set is excellent if you’re looking for NHL-branded cards, as the young LW is decked out in his new gear in a great action shot as he moves along the ice.

There’s no hard border at the top, while the bottom is cut away to make space for a large ‘Young Guns’ logo. The lack of a traditional border will make it harder to find gem mint copies in the future, but there’s an abundance in the here and now.

We’d recommend looking at the Exclusives parallel, which has a print run of 100 copies.

The final card on our list is another worthy contender and already sells for a four-figure fee. And yes it’s an Upper Deck branded card.

The 2019 UD CHL Alexis Lafreniere rookie card is ideal for autograph collectors and should have one of the better ROI of all his cards due to that auto. As well as the SP-1, there’s an image variation (SP-1V) that features Lafreniere standing with a stick in one hand.

The backdrop is the same as the card seen above, with skates and gear in the locker room. The card is finished in silver chrome with a large 2020 Draft logo at the bottom.

Lafreniere is one of the early contenders to win the Calder Trophy, and he would be the first Ranger to win it since Brian Leetch in 1989.

Of course, it’s still too early to call whether he’ll be the Rookie of the Year, but analysts such as TSN’s Craig Button have projected that Lafreniere could score 60 points in his first season.

That would be a best-case scenario, but there’s no doubt that Lafreniere has the skills needed to make it as one of the top rookies this year.

On the other hand, it’s better to set realistic expectations for a 19-year-old who deserves the time needed to acclimatize to a new league and country.

His rookie cards have already started to pick up in price and interest, with mint versions receiving lots of bids at auction.

Investors are banking on the LW providing the goods, while others have been attracted by his status as the first overall pick in 2020.

There’s still good scope for profit, but it’ll depend on his progression this season and beyond. For now, he’s eager to prove his worth, while he’s seen as the best prospect from the 2020 class. The team is expected to be competitive, and adding Lafreniere will only add to their firepower up front.