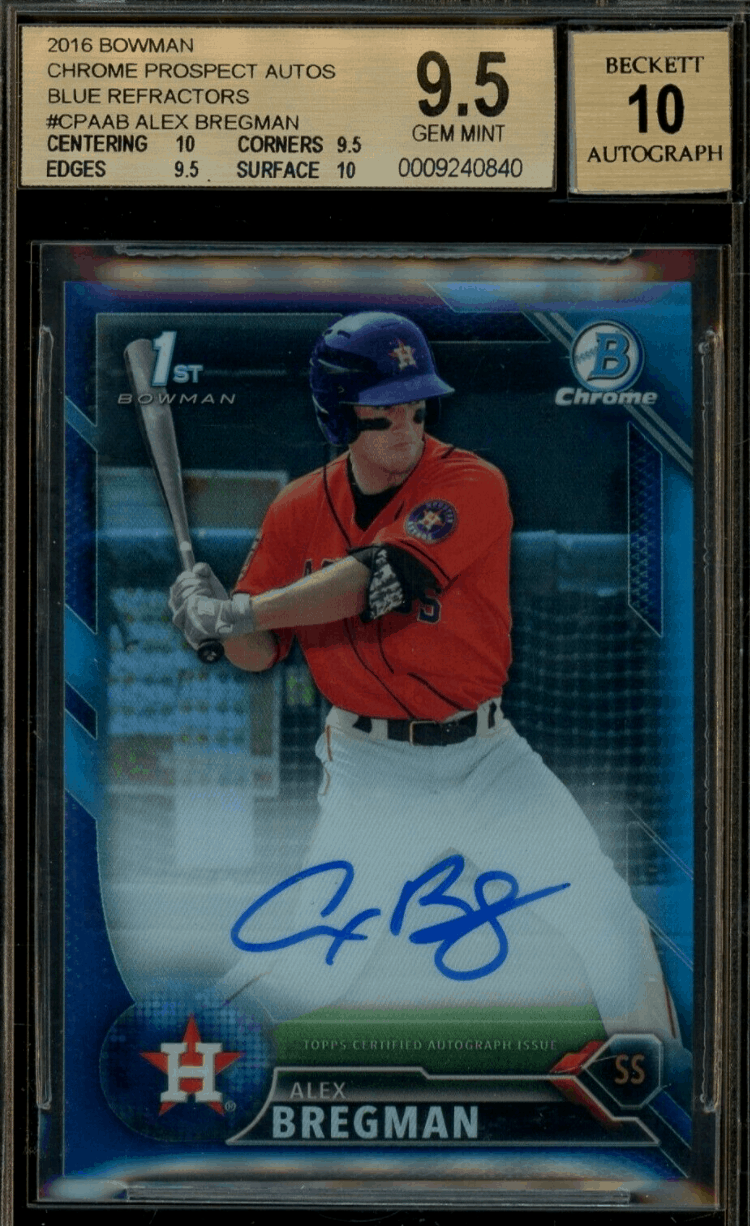 Alex Bregman (03/30/94) is a major league baseball player for the Houston Astros and plays third base and shortstop. Bregman was drafted by the Boston Redsox in the 29th round of the 2012 MLB Draft and by the Houston Astros with the 2nd overall pick in the 2015 MLB Draft (quite a jump).

Then came the cheating scandals with the trash cans which essentially took back everything Bregman worked so hard for over the past 3 years.

Bregman seems like a nice guy and hopefully, he can somehow redeem himself and move on from “trashcan gate”… only time will tell… he can help himself out a ton by having another career year in 2020… if he has a setback or two… trouble will start brewing for Mr. Bregman’s career and rookie cards. 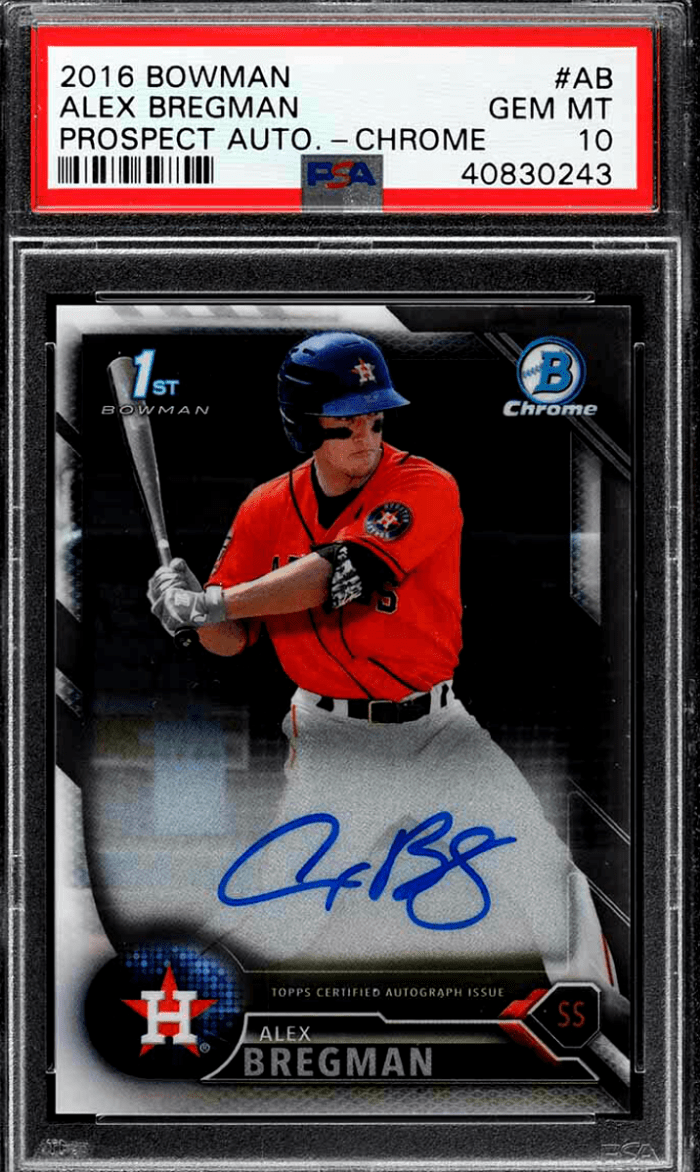 Here is our top pick when it comes to investing in Bregman rookie cards.

The base card is numbered #AB and shows Bregman gearing up to smack the ball down the line for a base knock or maybe even extra bases knowing his speed.

The card has the Bowman Logo in the top right-hand corner and the 1st Bowman graphic in the top-left hand corner.

Along the bottom, the card from left to right depicts the Astros logo, Bregmans full-name, and then his position (shortstop) to wrap it up.

The base PSA 10 version of the card is great for kids and collectors with smaller bankrolls while the higher end refractors are ideal for collectors who are betting big on Bregman beating “trash can gate” and coming up ACEs in his prime. 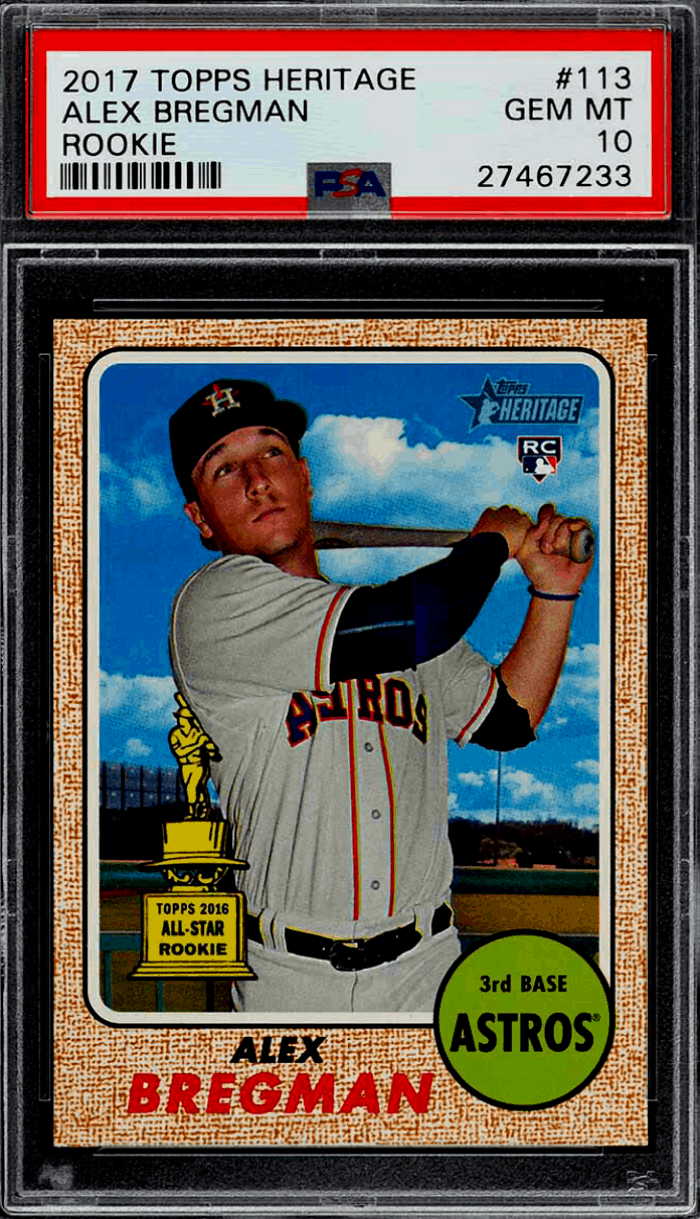 The 2017 Bregman Topps Heritage Real One rookie card is bringing the heat and is worth spending some coin on at top grades (assuming you’re a Bregman comeback believer).

Numbered #113 the card depicts Alex posing for the camera while taking a cut at a nonexisting baseball with a gorgeous blue sky with white puffy clouds in the backdrop. 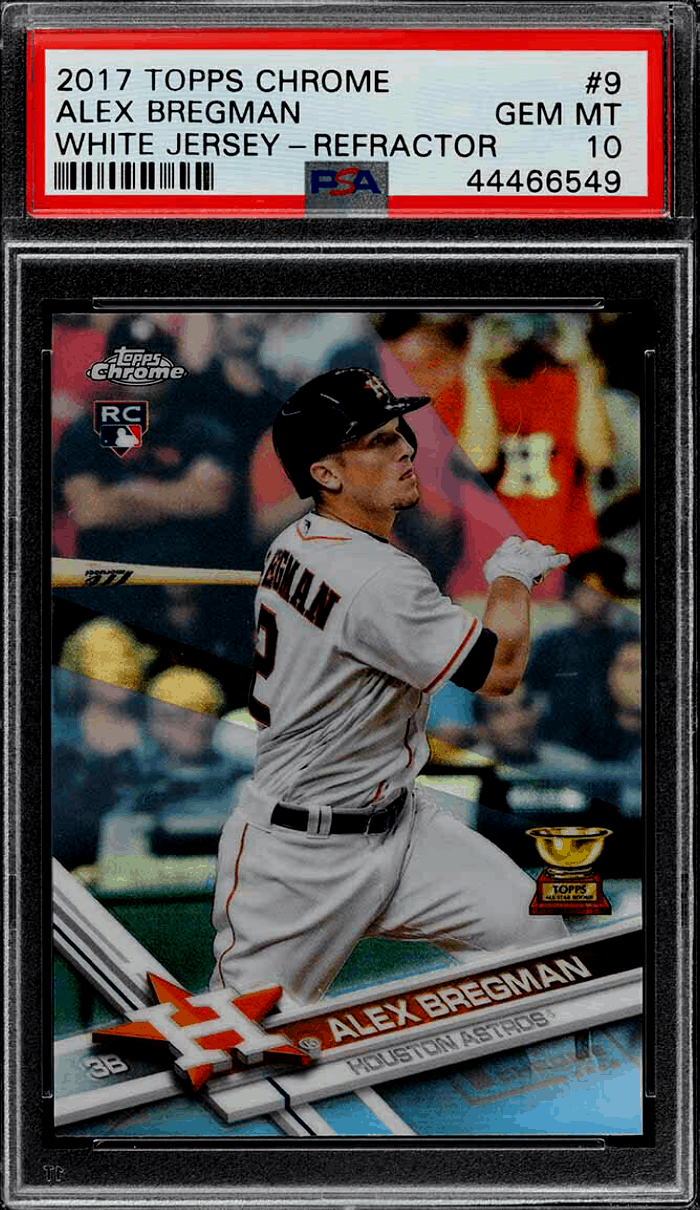 The card shows Bregman admiring a clean hit, with his name, position, and team name layered across the bottom of the card… an added bonus comes in the form of a gold trophy just above his name to the right which reads “Topps Rookie All-Star”.

Expect the value of the 2017 Bregman Topps Chrome rookie card to range drastically as based on the parallel.

If you are on the brink of buying a Bregman rookie card but would like some advice please email us at advice@goldcardauctions.com and we will provide you with our thoughts in regards to the card.

Some players don’t have a traditional route to the top, and Bregman is no different.

He originally missed out as a projected first-round draft pick after shattering the second knuckle on his throwing hand in the fifth game of his high school senior season, but he was always destined for greatness in the sport.

He ended up attending LSU instead-but managed to reach the big leagues with ease. In more recent years, he was named in the All-Decade Team by D1Baseball.com, showing just how important he is for the Astros, and where he ranks in the current standings.

There’s clearly a lot of interest in his collection no matter the year, although the sheer amount of enticing rookie cards does work to dilute prices to some extent.

However, if he continues to hit doubles like it’s the easiest thing in the world, prices are only going to go one way.

UPDATE: The Houston Astros pitch stealing scandal has come to light and it appears Bregman was a key figure in it.

Bregman rookie cards are not nearly as popular as they once were and the prices are nowhere close to where they should be for a player with those stats that early in his career (due to the scandal).

However, Bregman does have time on his side and can make up for a lot of the damage done as long as he produces MVP like seasons during his upcoming prime years.

We feel like Bregman did benefit from the pitch stealing scandal but is still an All-Star type player without it… we could be wrong though so tread lightly.