Alexander Ovechkin was born on 9/17/85 in Moscow, USSR. He was selected 1st overall by the Washington Capitals in the 2004 NHL Entry Draft. He is one of the modern NHL’s most prominent goal scorers, establishing an unparalleled career with a prolific portfolio that will undoubtedly result in his induction into the Hockey Hall of Fame. 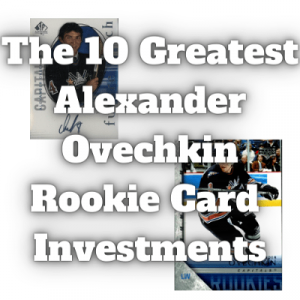 Ovechkin was born in Moscow in 1985 and single-handedly helped Russia win the Gold Medal in the 2003 World Junior Championship. Ovechkin comes from a powerful athletic bloodline where it seems pre-eminent that he’s destined to be a leading force in some sport.

If Ovechkin decides to leave the NHL tomorrow, he will remain one of the most influential players in the game. Here are the top Alexander Ovechkin RCs for investment purposes. We prefer PSA 10/9, BGA 10/9.5, or SGC 10 regarding modern-day rookie cards.

This is our favorite Ovechkin rookie card and is a must-have but will come at a steep price. The 2005 SP Authentic Alexander Ovechkin Rookie Card will cost more than 2k (PSA 10 or BGS 9.5) but is worth the long-term price as this card will only go up over the years.

Ovechkin rookie cards are one of the more underrated of all the cards in the hobby… this guy is genuinely the Tom Brady of the NHL.

The card is #190, and the back reads, “The top overall pick in 2004, Ovechkin can play both the physical and the finesse games, blending blazing speed with a 212-pound frame.”

There is also a HIGH GLOSSY version that will go for more than 5k (shown below). If you are lucky enough to have the cash to afford the HG version. BUY IT. We don’t like it as much as the SP RC, but it is nine the less, a VERY SOLID INVESTMENT.

“The Cup” has started to gain a reputation as a truly special subset in the hockey card industry since Upper Deck has continued to release this premium product. This Ovechkin card has a jersey patch and an on-card autograph, a signature duo many of the top cards have these days.

It features a great photo of a young Ovechkin, a close-up shot of his face above all the unique features. Ovechkin may be the best goal-scorer in NHL history, and for those looking for the most expensive of products, this one may just be it.

The Ice Premieres card earns the third spot on the list, mainly because of its rarity. This Level 1 acetate rookie card in 2005-06 Upper Deck Ice has only 99 copies, which means they are pretty challenging to come across and are very expensive to buy if you even find one. 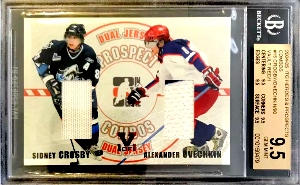 Many called these two future Hall of Famers and Cup Champions the day they were drafted. This is one of the few times the hype lived up to reality. 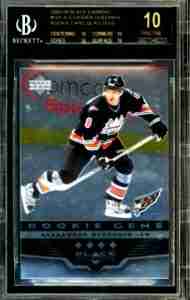 One of his best-looking rookie cards and, in particular, slabbed with a BGS 10 black label.

This and the Fleer Ultra rookie card below are best for moderate buyers. A PSA 10 grade will not reach four digits (yet), and the Upper Deck branding is the definition of a hockey card.

Here is a lovely card for the casual investor not looking to spend thousands on a rookie card. The 2005 Alexander Ovechkin Fleer Ultra rookie card is #252 and is an excellent investment for moderate bankrolls.

“After missing the 2003 NHL Draft eligibility date by just one day, Ovechkin was the first overall selection in the 2004 draft. Boasting an arsenal of offensive weapons, Ovechkin can hurt opposing teams in many ways, utilizing his speed and shiftiness to outmaneuver defenders or his size and strength to overpower them” – the reverse of Fleer Ultra RC.

This card may appear on eBay once a year; when it does, we suggest you bid.

Another rare Alex Ovechkin RC. It’s worth a mint if you can get your hands on it at high grades.

So rare, we couldn’t find an image. If you can, email us at info@goldcardauctions.com.

The most expensive Alexander Ovechkin rookie cards are the 2005 Upper Deck Ice Premieres RC #103 and the 2005 SP Authentic Future Watch #190.

The value of Ovechkin RCs will only go up, and we consider them one of the best investments in the hockey card investment world. If you would like us to provide an estimate of an Ovechkin rookie card, please email us pictures at info@goldcardauctions.com.

We feel that Ovechkin is one of the best players in the NHL of all time, and YES, you better believe we have him ranked higher than Sid The Kid both in cards and on the ice.

Not to mention, Alexander has one Stanley Cup championship and will be looking to add at least another one before he sets to retire. 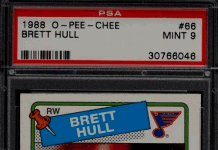 3 Brett Hull Rookie Cards A Cut Above The Rest