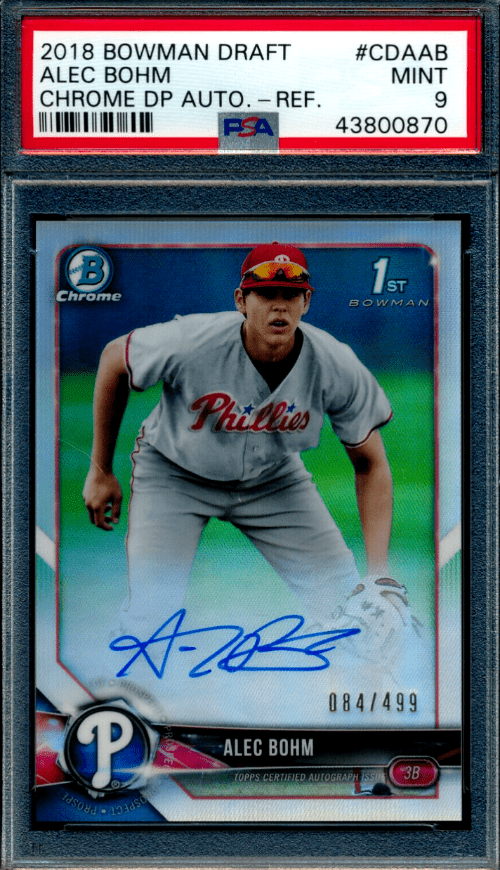 Alec Bohm (08/03/96) is a third baseman who is seen as a top prospect for the Philadelphia Phillies. He won the Paul Owens Award in 2019, recognizing him as the Phillies’ best minor league position player, while he was called into major league action midway through 2020.

Bohm took the roster spot that was previously occupied by outfielder Adam Haseley, who is injured with a sprained left wrist. It’s a massive opportunity, but is he actually ready for the big time?

We’ve come up with a list containing three of the top Alec Bohm rookie cards in what could be an important season for his fledgling career.

Here’s a rundown with three top Alec Bohm RCs, based on value, rarity, and overall market interest (check back periodically as better Bohm rookie cards will be released).

If you’re scouting for a signed, valuable RC, look no further than Bohm’s 2018 Bowman Chrome. It features a simple shot of the player standing ready at the base, wearing a solid sunglasses/hat combo. The border design makes it look a bit like a SIM card, while there’s a ‘1st Bowman’ logo in the top left corner, which always adds to the overall value.

The real money is found when checking out the rarest Refractor parallels. They have a serial number located on the front, just below the on-card auto. It’s hard to do better if you want the most expensive Bohm card available on the market. 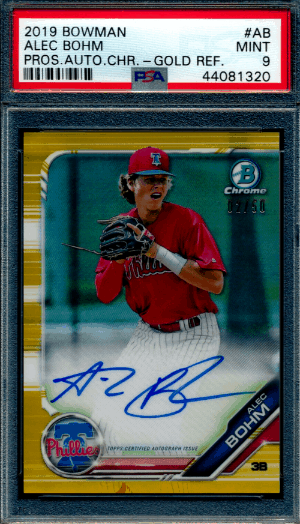 Part of the Chrome Prospect Autographs set, the second card to make the list was released in 2019. It has an action shot of Bohm as he prepares to throw a ball, with long hair and a look of concentration being the most notable features found in the image.

As with the card above, there are heaps of rare parallels that make up a veritable rainbow. This time, the serial number is found in the top right corner, although it lacks the ‘1st Bowman’ logo that makes the card above so special for collectors. This also means that it’s considerably more affordable, even for gem mint copies. 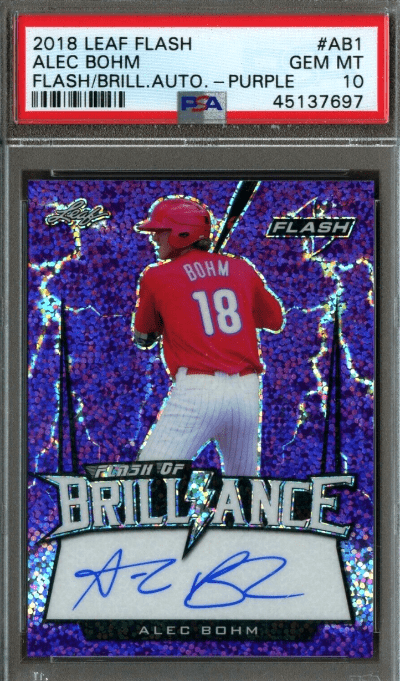 The final card on our list is a 2018 Leaf release. The brand might not be the most popular with baseball card collectors, but their ‘18 Flash of Brilliance inserts include an early signed Bohm card that makes for a great entry-level investment option.

Bohm’s name and shirt number are displayed prominently as the action shot was taken from behind, although his face is slightly obscured by the helmet. There are only six parallels, but they all have a great chromium look, meant to mimic lightning when viewed in the right light. (Hence, a ‘flash of brilliance’.) We’d look at the purple version and beyond considering the low price points.

Bohm rookie cards are priced accurately based on his minor league stats to date. Don’t expect any big spikes (up or down) for the foreseeable future.

If you are shopping around for Alec Bohm RCs and would like advice please DM us on the Gold Card Auctions Facebook Page. 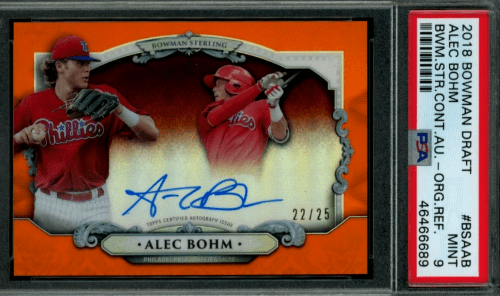 As hyped rookies go, Bohm hasn’t had a bad start to life in the major leagues. The injury to Haseley means that one thing is for certain. General manager Matt Klentak said that the plan is to get the rookie regular at-bats, primarily at third base if possible. He later confirmed as much in an interview;

“We want Alec to play regularly. We think he’s that kind of player. You know his track record in the minor leagues and you’ve seen him in both the spring training and the summer camp. He’s a hitter. We do think he can help our lineup.”

It’s certainly strong praise, and the Phillies desperately need a keen hitter after a dismal 5-8 start to the 2020 season. Will he be left by the wayside, or does Bohm have what it takes to make a significant impact on the major leagues this year? We’re sure to have a better idea by the time 2020 is over, and the values of his rookie cards are likely to change accordingly.

For example, since his call up, his rookie card prices have risen ever so slightly. We’re all waiting to see whether he’ll be able to live up to the immense pressure being heaped on his shoulders, but his RCs are already seeing a lot of interest from collectors, hobbyists, and investors.

A Gold version of the 2018 Bowman Chrome Draft Pick recently sold for four figures, and that’s a significant amount for a player who has yet to make his major league debut. Of course, that’s set to change within days, so it’s down to Bohm to show us what he’s got.

At 24, he still has time on his side, while even a below-average season will provide valuable experience. All signs point to his cards being a great investment option, although it might be better to wait until he’s played a game or two.