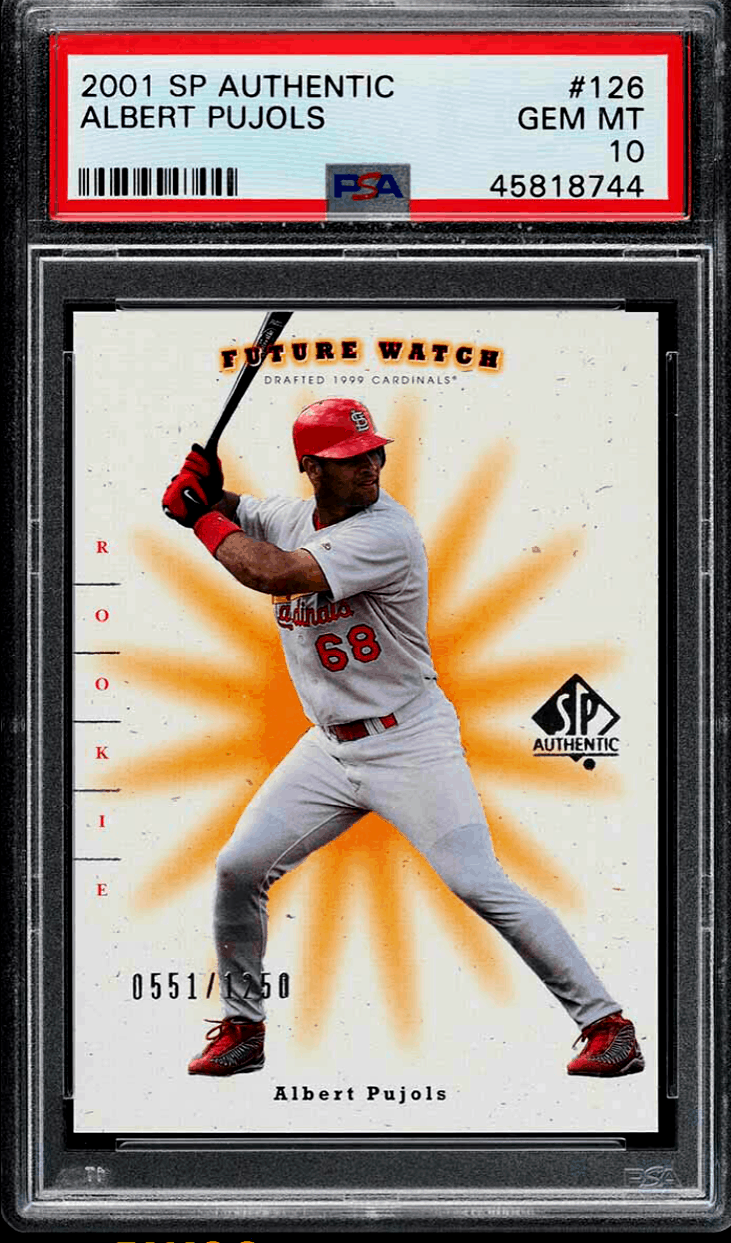 Albert Pujols was born on 1/16/1980 in Santo Domingo, Dominican Republic. He was drafted in the 13th round of the 1999 MLB Amateur Draft by the St. Louis Cardinals. Pujols made his debut on April 2, 2001, and quickly became a dominant player in the league batting .329 with 37 jacks and a mind-blowing 130 RBI’s in his first year!

Along with Sir Albert, he was also known as El Hombre, Phat Albert, and The Machine which paid homage to his insane baseball work ethic.

Albert is one of the game’s best players of all-time and we would rank very few players ahead of him (more on this later). 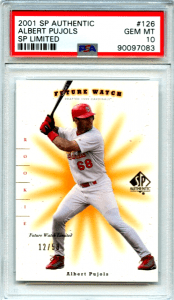 This card is unimprovable in any way whatsoever and is a must for all sports card investors.

Numbered #126 the back of the card reads “Pujols was already a highly regarded prospect with the Cardinals when entering the 2011 season, but he played so well during Spring training that he made the club to start the year. He got off to a blazing start, ranking among the league leaders in nearly every offensive category during April. Pujols began the season in the outfield but seems to have found a permanent home at third base. He has the skills to become an All-Star.”

Not only is this our favorite Puljos rookie card it is one of our favorite cards in all of sports card collecting (an easy top 5, maybe 3). 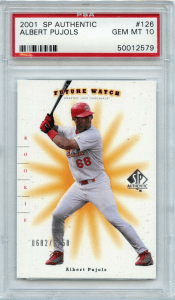 This card is very similar to the 2001 SP Authentic SP Limited Gold card other than the fact that there were 1250 of these made instead of 50.

Plus the front of the 2001 SP Authentic card is absent of the wording “Future Watch Unlimted”.

You will find this card to be much more affordable vs the Gold card but when it comes time to sell your profits won’t be as great.

Regardless we love this card and would be comfortable adding more than a few of these to our investment portfolio. 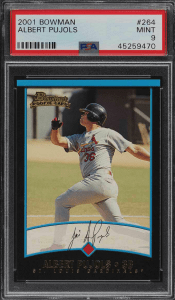 Numbered #264 the back of the card shows his vital stats, resume, skills, and up-close “I’m proud of myself for having a good year… but I didn’t expect to get so many honors“. 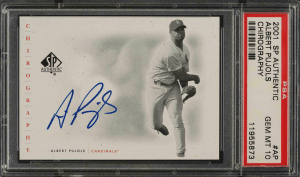 The card shows Pujols tossing the ball over to what we assume first base from third base. This bad boy is 100% worthy of a spot in your sports card investing portfolio.

As a rookie in 2001 Pujols had one of the best rookie years in the history of the MLB and was unanimously voted the NL Rookie of the Year (check out all Albert Pujols stats).

In 2001 Albert JACKED 36 home runs, had a mind-blowing 130 RBI’s, batted a head-shaking .329, and had an explosive 1.013 OPS… WOW!… 36 homers were more than double the number of home runs when compared to Ken Griffey Jr. first year in the league (speaking of the KID check out the best Ken Griffey Jr. Rookie Cards and invest today).

In the ever-changing world of sports card investing it is extremely difficult to provide a value of any given card.

If you would like us to estimate the value of one of your Pujols cards simply email us at info@goldcardauctions.com (include pictures of the card and allow up to 48 hours for a response)

You can also message us on our Facebook Page. 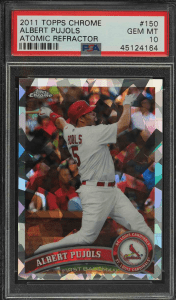 Albery Pujols is one of the most overlooked sports card investments in the game right now.

Ever since he foolishly made the move out to Los Angels people have seemingly forgotten how ungodly his numbers were in St. Louis (not to mention his career numbers when compared to the all-time greats).

Albert is one of the best players to ever play the game… period.

We would rank him in the top 10 (MLB all-time greats) without a doubt… wherein the top 10 is up for debate beyond the scope of this article.