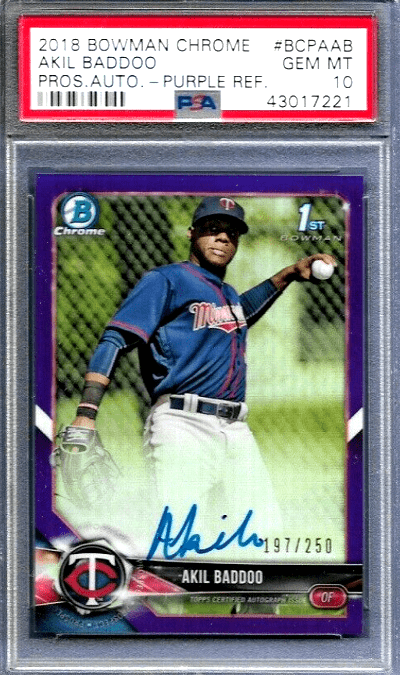 Maryland native Akil Baddoo played his high school ball in Georgia, and impressed scouts enough to be selected in the 2nd Round of the 2016 Major League Baseball Draft.

Baddoo worked his way up through the Minnesota Twins minor league system only to be drafted by the Detroit Tigers in the 2020 Rule 5 Draft.

The Rule 5 Draft is a complicated process, but Baddoo’s selection essentially meant he’d have a great shot at being a member of the Tigers’ 25-man roster for the 2021 season.

Trending: Rookie Cards for the 5 Fastest Players in MLB History

Baddoo did make the roster, and he didn’t wait to make his mark. He smacked a home run on the first pitch of his first Major League at-bat, becoming the second Tiger in history to do so.

We’ve come up with some of the best Akil Baddoo rookie cards for investors to add to their lot.

Though Baddoo is a former second-rounder, it’s clear that card companies didn’t anticipate his somewhat sudden promotion to the Tigers active roster.

After all, Baddoo had not yet progressed beyond Single-A ball before leaping all the way to the Bigs.

The following are notable selections from a limited pool of Akil Baddoo rookie cards. 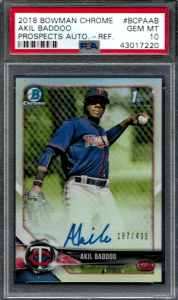 The 2018 Bowman Chrome Prospects Autograph set features 80 players, most of whom the casual fan has never heard of. Baddoo’s is a clear standout from this set.

The card features Baddoo in his blue Twins jersey, tossing the ball effortlessly with his left hand as his head is cocked to his left.

This is a parallel-heavy set, and the appearance of each parallel varies (drastically in some cases). Different parallels have unique border colors and reflective designs.

Baddoo’s blue signature, which features a prominent “A”, sits just above the card’s nameplate on the bottom edge.

“Refractor parallels vary in rarity. The Superfractor is numbered 1/1 and has sold for $12,000. Other rare parallels of this card may command similar prices.” 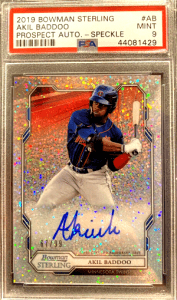 Because he was no more than a prospect before his 2021 debut, some of the most valuable Akil Baddoo cards are prospect cards.

The 2019 Akil Baddoo Bowman Sterling Prospect Auto #BSPA-AB is an attractive card that shows Badoo in his blue Twins uniform.

The card image showcases Baddoo’s powerful frame. The lefty is beginning to swing, with his hands and hips caught during their forward transition.

There is a telltale sign that the Baddoo pictured in this card has yet to reach the Majors: his helmet has two ear covers, a look more common to minor leaguers than those in The Show.

A blue autograph features prominently amidst a refractor background.

This card features several parallels. Depending on the parallel and condition, this has proven to be a hundred or low thousand-dollar card. 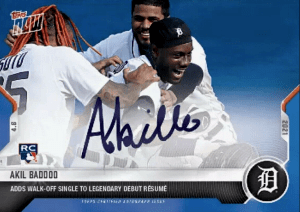 Topps NOW has continually added to rookie card collections that would otherwise be sparse.

Players like Akil Baddoo, who would have only one or two rookie cards under typical circumstances, end up with at least a couple more because Topps NOW is able to produce cards throughout the season.

It shows Baddoo in his white Tigers uniform, right arm raised and mouth agape as he lets out a celebratory howl. Baddoo’s signature is scrawled at a slight vertical tilt.

There are 6 versions of this card, each of which contains a different colored background (and one version with no background color, only the original image).

There are multiple other Akil Baddoo Topps NOW rookie cards, and this one has generated strong demand.

The first two cards we’ve listed, the Bowman Chrome and Bowman Sterling autograph prospect cards, have more of a fixed supply. You can expect that these will remain the most high-priced Baddoo rookie/prospect cards.

Topps NOW cards will generally have a price ceiling. More of them can be created at virtually any time. This fluid supply can keep prices relatively low.

If you would like an estimated value of your Akil Baddoo card please email us at value@goldcardauctions.com and include 2 photos at a minimum.

Akil Baddoo is a quality player. Unfortunately, he plays for the Detroit Tigers.

Being a Tiger could hurt Baddoo’s name recognition as well as his odds of winning a World Series, MVP, or another major award any time soon.

He’s a second-round pick, but not necessarily a can’t-miss prospect. Are you confident that Baddoo will become a household name?

The entry point for Baddoo’s cards is palatable. However, there’s no guarantee that the investment will pay off.