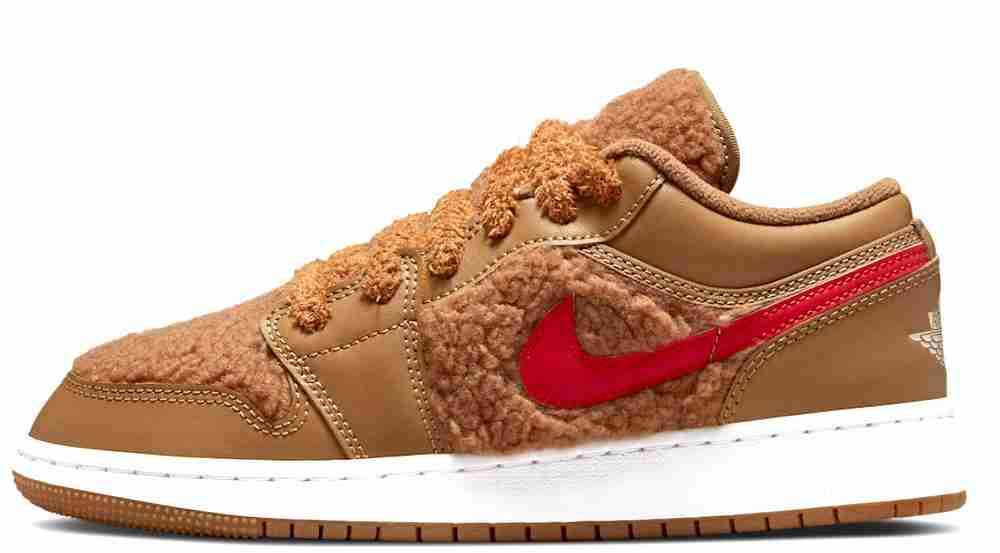 Jordan Brand has released another memorable pair of sneakers in the form of the Air Jordan 1 Low GS “Teddy Bear”.

The latest in their collection of AJ1 kid’s shoes draws inspiration from the childhood toy, adding faux fur as well as custom fuzzy laces.

“Dark Driftwood” is the main color and is used for the toe box, quarter panel, and tongue, as well as additional segments of the sneaker.

“Pink Salt,” “Racer Blue,” “Gym Red,” and “Volt” are used for the Swoosh, with red and blue found on the insole. The midsoles are white, matched with a classic gum outsole.

They earn the Teddy Bear name due to the fleece-lined collar, which definitely helps them stand out from the crowd.

Of course, the design means that they can be scuffed or ruined easily, but they’re a definite head-turner.

Originally priced at $85, they were made available at Nike.com as well as selected retailers, although they’ll be tough to find at the RRP.

Otherwise, we’d take a look at the likes of eBay or StockX, as well as Flight Club. Resellers have pairs available in all sizes within the kid’s range.

Of course, prices will vary depending on the size of the sneaker selected, with the largest traditionally neglected. In this case, 7Y’s are pretty popular, while the same goes for pairs found in the middle.

The Air Jordan 1 collection is insanely popular, just like the player from which the brand earned its name.

First produced in 1984 for the basketball legend, Peter Moore’s design for the Air Jordan 1 has risen to legendary status, and is used as the basis for this pair of sneakers.

They’ve benefited from a renaissance in recent years, due in part to supply exceeding demand for the rarest pairs on the market.

As for the Teddy Bear AJ1’s, they’ve held their value in the short-term, which is a promising start for anyone aiming to grab a pair or two.

For the best results, we’d stick with shoe sizes that are somewhere in the middle, so there’s a better chance that they’ll fit a wider number of potential buyers.

It’s worth remembering that these shoes haven’t had a worldwide release, and there are lots of sneakerheads outside of the U.S. that wouldn’t say no to a pair of Teddy Bear Air Jordans.

According to StockX, prices have dipped ever so slightly after going up 150% in the weeks preceding their release. This is reflected by the likes of eBay, although they’re still selling for over 20% compared to their original RRP.

We think that they’re one of the more eye-catching pairs of AJ1s that you’ll find, although they are slightly limited by the size factor. (As a kids shoe, it’s only available in a US 3.5Y to a US 7Y.)

This means you’ll need tiny feet if you plan to wear the kicks, and it means that a large number of would-be owners will have to leave them on the shelf.

However, the Teddy Bear AJ1’s are likely to remain popular in the long term, especially with any children that happen to set eyes on a pair. They’re great if you can deal with the grade school sizing, and will work for some people who are lucky enough to have feet small enough to make do.

As a potential investment, they’re selling like hotcakes on most websites, and the price has held steady following their release in the US.

At the very least, we’d keep an eye on prices in the meantime, especially as the sneakers were released so recently.

You can never tell with Air Jordan’s, but they do have a good track record when it comes to being used as an investment for the future. 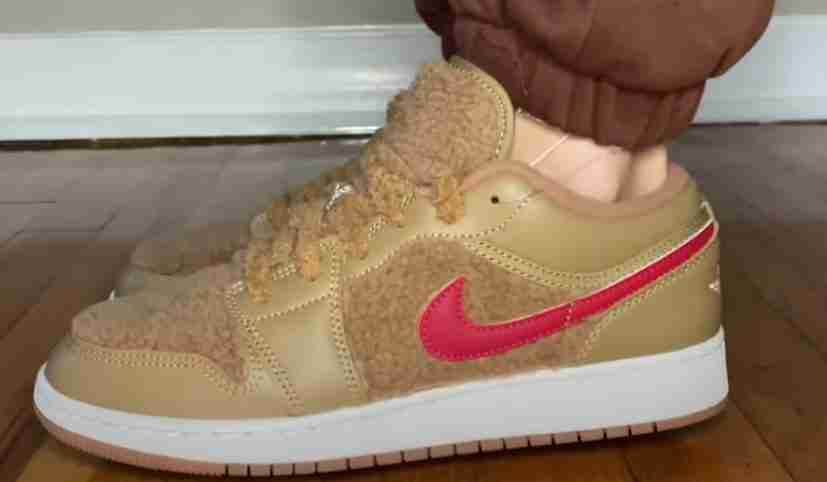