The Minnesota Vikings drafted Adrian Peterson (03/21/85) as the 7th overall pick in the 2007 NFL Draft. He is known for his downhill running style, destroying opposing defenders on the way down. 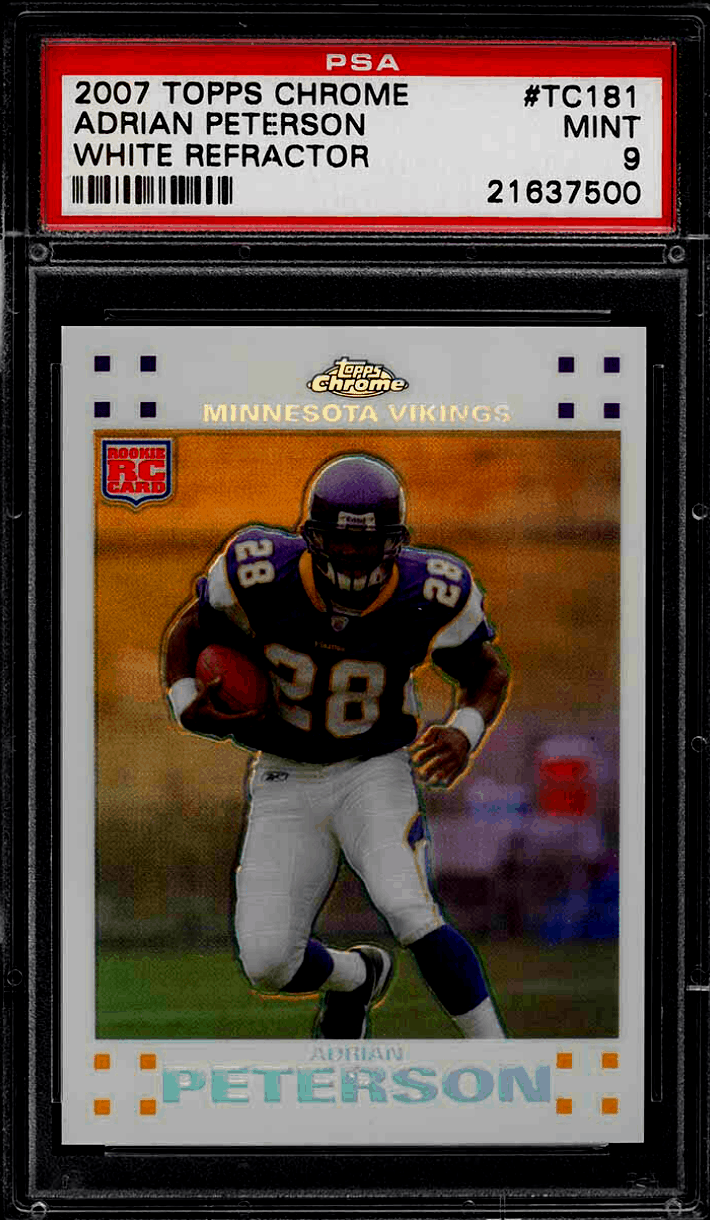 He was an ABSOLUTE BEAST at the University of Oklahoma, running for over 4,000 yards and 40 touchdowns in 3 years. In his freshman year, he averaged a mind-blowing 5.7 yards per carry on 339 attempts (both college career highs).

He continued his BEAST MODE ways in the NFL. He holds several league records, including the most rushing yards in a single gam

Peterson bounced around the NFL as he suited up for various teams. He played for the New Orleans Saints, Arizona Cardinals, Tennessee Titans, and Detroit Lions and always provided a steady veteran presence.

Due to his lengthy and successful career, Peterson is a lock to eventually make the Pro Football Hall of Fame in Canton, Ohio. He’s one of the most iconic players of his generation and holds multiple NFL records, including the most rushing yards in a game with 296 against the San Diego Chargers in 2007.

We’ve come up with a list of three of the best Adrian Peterson rookie cards on the market, along with an investment report looking at the next few seasons as he enters the final chapter of his playing career.

Peterson’s rookie cards were released in 2007, the perfect time for collectors looking for autographs, jersey patches, and low serial numbers. Here’s a list of three of the most popular options based on recent auction data.

The most prestigious Peterson RC by a large margin, his 2007 Upper Deck Exquisite Collection comes with an on-card auto, a large patch, and a small serial number found at the base of the card. They’ve managed to fit everything in by opting for landscape design, which doesn’t feel cluttered.

The UD brand is always popular with collectors, so it’s the one to keep an eye out for if you’re looking for the best. However, it’s also reflected in the overall price.

The 2007 Topps Chrome is an exciting card that is also the most affordable on the list overall. As well as strong branding, it’s probably the strongest base Peterson RC overall for several reasons.

It features a stenciled image of Peterson on the move with a football under one arm, with a sleek background that ensures that all of the focus is on the player. There’s a unique RC logo found on the top left corner, topped off with a simple, filled background. Meanwhile, Refractor versions are difficult to find, especially in good condition due to problems with poor centering. As they have white corners, you’ll also have to watch out for any dings as they’re instantly identifiable.

A great landscape card, the 2007 SP Authentic should be on your radar if the Upper Deck release isn’t your style. It might not have the lowest serial number compared to the likes of the UD card at 399, but it’s still rare enough to make it valuable, thanks to the power of the SP brand.

It has a luxurious on-card auto at the bottom, with a patch to the right and an image showing Peterson sprinting in complete kit on the left. There’s also a second profile picture of the player smiling down at the camera with his helmet removed.

While this card didn’t quite make our list for the top three, it’s still a perfect rookie card where investors can potentially make a significant return on their initial investment.

This is another card from Peterson’s rookie season that wasn’t quite good enough to crack the top three. It has a great shot of Peterson in action with the ball tucked under his right arm, left arm at the ready to stiff-arm a helpless defender. On the left side of the card is a graphic that denotes this as an official Peterson rookie card.

While this card has no special features such as an on-card autograph or a game-worn jersey patch, it’s similar to the Topps Chrome edition listed above in that the strong branding gives it value. These cards are worth something in good condition, and collectors should be on the lookout constantly for any underpriced online listings.

The most expensive Adrian Peterson rookie card is the 2007 Exquisite Collection Rookie Patch #133.

If you are thinking about buying an “All Day” rookie card but would like advice, please DM us on the Gold Card Auctions Facebook Page or email us at advice@goldcardauctions.com.

First off, Peterson hit the headlines for the wrong reasons when he pleaded no contest to the misdemeanor charge of recklessly assaulting his four-year-old son in 2014. It’s a dark cloud that will likely hang over him in the long-term, while he was suspended during the 2014 season because of the saga.

On a lighter note, he was handed a career-low Madden 21 rating, which is a clear downswing from his cover star status back in 2014. There’s no denying that he’s lost a step compared to his prime, but he hopes to play on for at least four more seasons according to a recent interview with TMZ.

Despite injuries plaguing his 2016 season, he’s put in good numbers for the Redskins in the last two years, having run for 1,940 yards and 12 touchdowns. It could lead to an attempt at the all-time rushing record, which would undoubtedly cement his legacy as an ATG RB.

His rookie card options are plentiful, while signed editions with low serial numbers make them enticing for collectors and investors that want to add a copy or two to hold as a long-term investment. He’ll have to retire one day, and the prices of his rarest RCs will likely have jumped by that point.