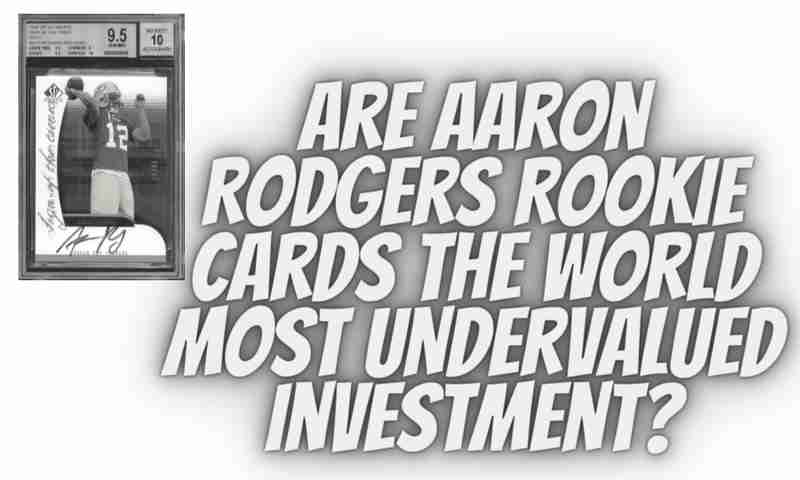 *This is one point of view in regards to the current value of Aaron Rodgers’s rookie cards. We enlisted our top writers to give their opinion on the subject. Here is Joshua Cameron. Check back later for the next write-up.

After Rodger’s success at Butte College, he was recruited to play at the University of California. After breaking numerous records at Cal, Rodgers was voted as a finalist for the 2004 Heisman Trophy.r

Rodgers took a back seat to the legendary Green Bay Packers quarterback and NFL Hall of Famer Brett Favre for the first three seasons of his NFL career before earning the starting role.

Since Rodger’s 4th NFL season, his first season as the Packers starting quarterback, Rodgers quickly became the most proficient quarterback in the league. In 2010, Rodger’s led the Packers to a 10-5 record and captured Super Bowl 45.

Throughout his 17-year NFL career, Aaron Rodgers has been one of the most dominant quarterbacks in the league behind his accuracy and efficiency. Despite Aaron Rodger’s accomplishments, his rookie cards have flown under the radar for a quarterback of his caliber and remain undervalued.

Aaron Rodgers most valuable rookie card emerged from 2005 SP Authentic as a Rookie Authentics Patch Autograph NFL Logo. As if obtaining Rodger’s game-worn jersey featuring the NFL logo and his autograph aren’t enough, this iconic card is also serial-numbered 1-of-1.

A collector merited a BGS 9.5 for the card’s condition and a BGS 10 for Rodger’s autograph. On November 1, 2020, a collector purchased Rodger’s iconic rookie card for $229,200 through Goldin Auctions.

As Aaron Rodger’s 2005 SP Authentic Rookie Authentics Patch Autograph NFL Logo rookie card is limited to only one copy, it remains his most valuable rookie card and holds a tremendous amount of value.

On March 7, 2021, a collector purchased a PSA 9 Aaron Rodger’s Rookie Authentics Patch Autograph rookie card at Goldin Auctions Winter Auction for $107,010. While Rodgers Rookie Authentics Patch Autograph rookie card merited a PSA 9, according to PSA’s population report, four cards have received a PSA 10 yet to be sold at auction.

Rodger’s Rookie Authentics Patch Autograph rookie card has an average sale price of $10,043.50, with the most valuable card after this one fetching $12,000 back in July 2019.

While Rodger’s second most valuable rookie card carries a much higher print run than his top rookie card, this particular Rookie Authentics Patch Autograph rookie card highlighting Rodger’s uniform in the serial number caused this card to skyrocket in value.

Rodger’s rookie card is too a Rookie Authentics Patch Autograph card, but this time around, it’s a parallel card, serial-numbered to 25. Rodger’s patch highlights the iconic Green Bay Packers’ colors of green, gold, and white.

Graded by Beckett, Rodger’s Rookie Authentics Patch Autograph rookie card received a BGS 9.5 for the card’s condition and a BGS 10 for his autograph.

Should you wish to purchase a 2005 Bowman Chrome football hobby box to chase other Aaron Rodgers rookie cards, it will run you roughly $600 on eBay.

Reverting back to 2005 SP Authentic, Aaron Rodgers’ fifth most expensive card is his Sign of the Times Gold autograph rookie card.

Each Sign of the Times gold parallel card from 2005 SP Authentic is serial-numbered to 25.

Aaron Rodger’s Rookie Authentic gold parallel rookie card received a PSA 10, firmly establishing its value as one of his most coveted rookie cards.

When it comes to football trading cards, the rookie cards of quarterbacks typically retrieve the most money. As we now turn our attention to Aaron Rodger’s top five most valuable base rookie cards, the prices seem too good to be true, especially for a quarterback of his nature.

Disclaimer: We’ve utilized data strictly from PSA for each of Aaron Rodger’s top five most valuable base rookie cards.

According to PSA’s population report, Rodger’s 2005 Topps Chrome base rookie card has a total population of 1,070 cards, including 237 cards obtaining a PSA 10.

The print runs for each card ranged from a few hundred to several thousand. Collectors had the option of receiving the physical card or keeping them in a Topps climate-controlled vault.

Unfortunately, the eTopps concept faced countless problems due to website difficulties, server issues, and printing delays back in the early 2000s. However, Topps brought back this concept in 2016 with Topps Now, essentially the same idea as eTopps, though because of advanced technology, the Topps Now platform flourishes.

Like eTopps, Topps Now takes a similar approach with a print-on-demand method, meaning while Topps sets the card’s price, the print run is often determined by how many collectors purchase the card.

2005 Bowman issued a 280-card base set and circulated 24 packs of 10 cards in each hobby box. The first 165 cards of 2005 Bowman highlighted NFL rookies, including Aaron Rodger’s rookie card.

Although a staggering 41% of collectors received a PSA 10 for Rodger 2005 Topps Heritage rookie card, it remains one of his most coveted base rookie cards.

The population report from PSA unveils a total population of 208 cards, including 68 cards receiving a PSA 10.

Aaron Rodgers has been the Green Bay Packer’s franchise quarterback since the 2008 NFL season, yet the combined market value for his top five most valuable base rookie cards is only $10,627.50.

2000 Playoff Contenders limited each Championship Ticket parallel card to 100 copies. These 100 copies of Brady’s rookie card are often viewed as the most prestigious football cards of all time.

Although Brady’s record sale was surpassed by Patrick Mahomes 2017 Panini National Treasures NFL Shield rookie card that garnered $4,300,000 through the PWCC Marketplace, Brady’s Championship Rookie Ticket rookie card is one of the most treasured football cards in the hobby.

The following are the five most expensive transactions of Tom Brady’s Championship Rookie Ticket rookie card:

As illustrated, Tom Brady’s rookie cards are among the most valuable football cards in the hobby. Now, let’s examine how Brady’s top three base rookie cards have fared.

Disclaimer: We’ve utilized data strictly from PSA for each of Tom Brady’s top three most valuable base rookie cards.

However, since Tom Brady has repped the number 12 since his rookie season with the New England Patriots, and this rookie card being serial-numbered 1240/1250, emphasizing Brady’s jersey number, it fetched a record-high $181,200 at Goldin Auctions Winter Auction.

In fact, Brady’s 2000 Bowman Chrome base rookie card is on par with Rodger’s 2005 SP Authentic Sign of the Times Gold autograph rookie card, which is limited to only 25 copies.

When Tom Brady and Aaron Rodgers ultimately hang up their cleats, they will go down as two of the greatest quarterbacks of all time. However, Aaron Rodger’s rookie cards are consistently not on the same level as Tom Brady’s.

From here, we’ll analyze the origin stories of Tom Brady and Aaron Rodgers, compare their statistics, and grade both quarterbacks’ NFL supporting cast to determine the reasoning as to why Brady’s rookie cards remain more prevalent than Rodgers.

Tom Brady and Aaron Rodgers NFL careers got off to similar starts.

After being drafted as the 199th overall pick in the 6th round of the 2000 NFL Draft, Tom Brady was the backup to Drew Bledsoe, who at the time was one of the best quarterbacks in the league. In fact, on March 8, 2001, Bledsoe signed the largest contract in NFL history for 10 years, $103 million. Unfortunately for Bledsoe, he suffered a bizarre lung injury during Week 2 of the 2001 NFL season and never regained the starting job as Brady’s legacy began.

Two of the most prominent quarterbacks in NFL history are Tom Brady and Aaron Rodgers. Through 22 NFL seasons, including 21 as a starting quarterback, Tom Brady is a seven-time Super Bowl champion, 14-time NFL Pro Bowler, and three-time NFL MVP. In 17 NFL seasons, including 14 under center for the Green Bay Packers, Aaron Rodgers achieved one Super Bowl ring, nine Pro Bowl appearances, and three NFL MVP awards.

While Tom Brady may have more Super Bowl rings and average a mere five more passing yards per game, Rodgers delivers touchdowns at a higher clip, throws fewer interceptions, and has both a higher passing percentage and passer rating.

To illustrate the accuracy and efficiency of Rodgers, look no further than his 2011 and 2020 MVP seasons.

In 2011, Aaron Rodgers threw 45 touchdowns versus only six interceptions while completing 68.3% of his passes to obtain a 122.5 passer rating, the highest in NFL history.

In 2020, Rodger’s tossed 48 touchdowns compared to five interceptions and completed 70.7% of his passes to earn a 121.5 passer rating, the second-highest in NFL history after his 2011 season.

Aaron Rodgers is also the only player in NFL history with more than 300 passing touchdowns and fewer than 100 interceptions.

While Brady holds the record for most Super Bowl rings with seven, Aaron Rodgers is a more accurate and efficient quarterback than Brady.

Although it seems like Brady will compete until he’s 50, when all is said and done, Rodger’s may surpass Brady’s record for passing yards and touchdowns while already having the edge in passing percentage and passer rating.

Tom Brady and Aaron Rodgers will be recognized as two of the most legendary quarterbacks of all time. However, the trend continues, as Rodger’s rookie cards are consistently overshadowed by Brady’s.

Although Tom Brady’s seven Super Bowl rings and counting is a number that may persist for decades, he’s had a much stronger supporting cast around him than Rodgers. Through Brady’s first 21 NFL seasons with the Patriots and Buccaneers, his teammates acquired 35 Pro Bowl selections and 19 All-Pro honors. In comparison, Rodger’s teammates have earned 31 Pro Bowl selections and seven All-Pro awards.

Through Week 13 of the NFL season, the Tampa Bay Buccaneers are the favorite to win Super Bowl 56 at +500, with the Green Bay Packers tied for the second-highest odds at +700. Football card collectors will view Aaron Rodger’s rookie cards in a new light if he proves himself in the postseason and the Green Bay Packers win the Super Bowl this season.

Are Aaron Rodger’s rookie cards the most undervalued investment on earth? Without a doubt.

Here’s to an NFC Championship showdown between the Tampa Bay Buccaneers and the Green Bay Packers, which could significantly influence the value of Aaron Rodger’s rookie cards.

Learn how to invest in sports cards: