Mac Jones is trending in the right direction and New England fans feel they have found the next great QB for the Patriots. His rookie cards are still relatively cheap based on what the future could hold for Mac under Bill Belichick.

Mac Jones was the 15th overall pick in the 2021 NFL Draft by the New England Patriots. Since the day he was drafted Jones was already drawing a similar play style to Tom Brady.

The Patriots were stunned that Jones fell 15th overall to them. Jones previously played college football at the University of Alabama.

The 23-year-old rookie has already been named the starting quarterback for the Patriots this season. The Patriots even released the former MVP Cam Newton during the pre-season. Jones seems poised to become a star in New England and many football fans are already buying into the hype.

Since the day that the news broke that Jones has been named the starter, sports card collectors and buyers have been investing heavily into his cards.

Here is a breakdown of the Top 5 Mac Jones you should be buying, plus a checklist and investment rating. I will also discuss which Jones cards you should be looking to buy in the future as well. 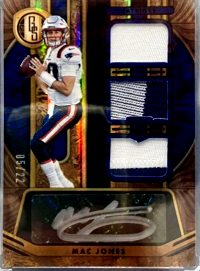 This card so far is considered the best Mac Jones card on the market. This is a Gold Standard RPA Auto rookie which is also serial numbered 10/22. The significance of this card is serial numbered 10/22 adds a lot more overall value because number 10 is Jones’s jersey number.

This card is listed on eBay for $5,000 or the best offer, a similar card without the rare jersey number serial number is listed for $3,500. Other cards that are similar to this one are also serial numbered /49 examples, those examples will cost $2,000-3,000 range. 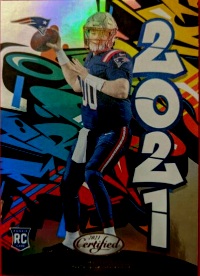 This card is considered an SSP (Super Short Print) and it’s featured in a number of different print run examples. The print runs include 149, 99, 75, 10, and 5. The numbered to five versions is listed on eBay for $2,500 or the best offer.

This card also features a gold and red version, the gold version serial numbered out of /25 has sold for $500+ within the last week.

Rare serial numbered insert rookie cards like this one only becomes tougher to find so this is a great one to buy. 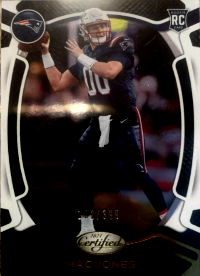 This card is another rare short-printed rookie card of Jones. Only 399 of these were printed and this card is selling in $130-300 range within the last couple of days on eBay.

Serial numbered rookie cards like this can become difficult to find because of how limited they are. Certain collectors or buyers want to obtain every Jones rookie card ever produced. This card would be a nice addition to starting your Jones collection especially because this card is already becoming tougher to find.

There are less than 10 of these available on eBay to buy and they could sell out quickly especially if Jones starts the season with some big games.

This card has a nice on-card autograph of Jones and its serial numbered out of 99 examples. Investing in one of these will cost you $900-1,000 heading into the start of the week 1 season. Most collectors prefer on-card autograph versus sticker autograph and this is one of the first on-card auto examples of Jones featured in his Patriots uniform. Rarer versions of this card are also featured in print runs of 79, 27, and 6. 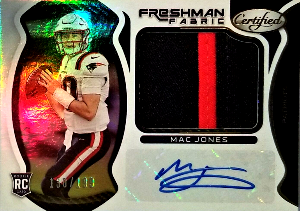 This card is a patch auto of Jones featuring a two-color patch. The card is also serial numbered out of 199. The value of this card is ranging from $600-800 within the last week on eBay sales.

When investing in sticker autographs, one thing to look for is to ensure the entire autograph is written on the sticker and does not have a run-off signature. A run-off signature can diminish the value especially if you intend on having the card graded in the future. 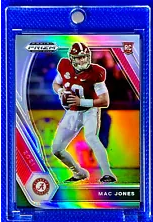 Mac Jones is a pocket passer similar to the play style of Tom Brady. The Patriots love his makeup and quarterback presence. Jones has a bright future with the Pats and has a great chance to be their quarterback of the future for the next 10-plus years.

Investing in Jones will pay off in both the short-term and long-term. His prices should continue to trend up in value this year especially if he plays well in his first couple of games.

A few things to make note of is to keep an eye out on when Prizm is released in November-December. The Prizm rookie of Jones featured in his Patriot uniform will be very popular especially Silver or other color variations.

Contenders come out towards the end of the football season in late December or early January. My favorite parallel is the Cracked Ice Autographed version serial numbered usually out of 24.

Prizm, Optic, and Panini Contenders Auto rookies would be my three cards to the target Jones once they are released this season.

Do you think Mac Jones will be a star?