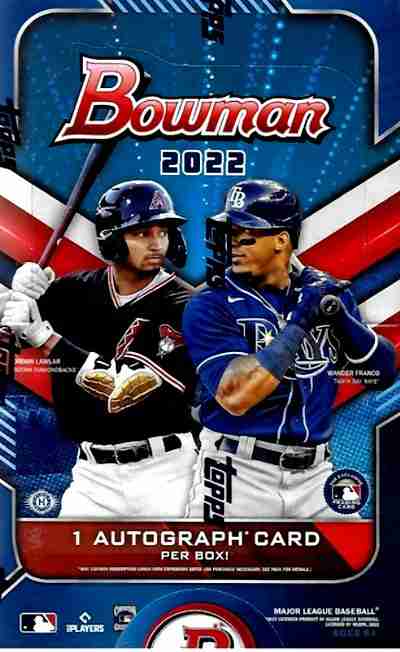 The 2022 Bowman Baseball Card Set was released in the Spring of 2022 and is one of the hottest hobby boxes so far this year. The set features 100 cards in the paper base set along with 150 of the MLB’s top prospects.

Some of the game’s top prospects included in the set are Jordan Walker, Henry Davis, and Julio Rodriguez. The Prospect Chrome cards bring the heat with a larger lineup of Refractor parallels.

Here are the top 5 cards from an ROI perspective in regards to the 2022 Bowman Baseball Hobby Box. You will want to buy or have the following cards sleeved and graded if you are lucky enough to pull them.

The next Ted Williams? This kid is already doing amazing things in Triple-A and it should only be a matter of time until he is an All-Star in the Big Leagues. Get in now and thank us later.

Bobby Witt Jr. is already crushing home runs in the MLB. Don’t worry as his peak is still years away and buying now is still a profitable long-term investment.

Mr. Walker is a GIANT and may still be off some investors’ radar. Not for long as this kid’s body resembles a Mr. Stanton & Mr. Judge and can crush the ball just as far.

This is one of the better Bowman Prospects set in the last 10 years and buying up a few hobby boxes is a stellar idea. We purchased 5 and profited on all of them (and that was without getting the autos graded).