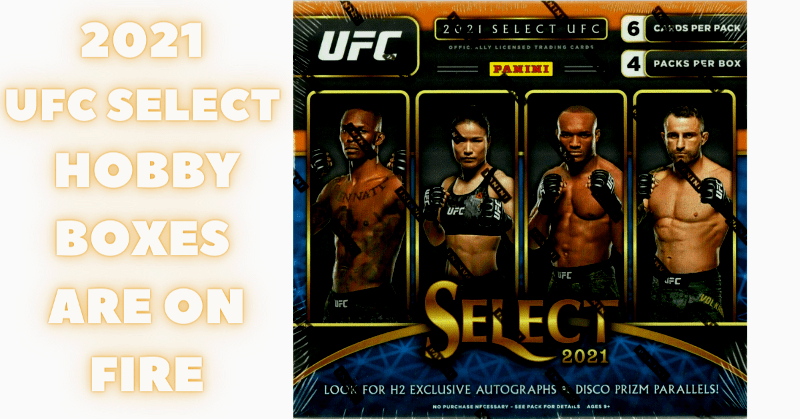 2021 Panini Select is the first-ever UFC release from the brand following a multi-year licensing agreement with the trading card company.

In practice, it follows a similar format to other Select collections, with a three-tiered base set named Concourse, Premier Level, and Octagonside.

There are numerous popular inserts and autos, so here’s everything you need to know about the 2021 Panini Select UFC collection.

Khabib’s second appearance on this list, this time we’re looking at his Concourse parallel, which shows the fighter in a devastating action shot as he prepares to smesh.

The majority of colored parallels are pretty affordable unless you’re looking at anything with a serial number of 25 or less.

It’s an affordable alternative to the signed Khabib card seen above and is another with good potential for profit in the future.

Khabib Nurmagomedov retired in 2021, with a record of 29-0-0. (This includes 13 victories in the UFC as he claimed the lightweight championship in dominating fashion.)

His signed card from the 2021 Select UFC Signatures set has a base version which is limited to 99 copies.

It’s definitely worth grading if you’re one of the lucky owners, even if the auto is of the stickered variety.

Israel Adesanya is one of the most exciting fighters in the organization, as “The Last Stylebender” unified the middleweight division and beat all-comers. He eventually went up to light-heavyweight, losing to Jan Błachowicz in a title bout.

His Octagonside card is clearly favored by collectors, drawing attention and multiple bids whenever a copy comes up at auction. It features a great shot of Adesanya with his arm held aloft, with a clear view of the UFC strap.

Brock Lesnar is arguably better known for his time spent as a WWE wrestler, but his MMA cards are still highly collectible. He won the UFC heavyweight championship in his fourth professional fight, which is an insane achievement for any athlete.

Avoiding the fairly basic auto, Lesnar has a trio of interesting Prizm cards from the base set. The Concourse image shows the fighter with his hand aloft, while Premier Level shows him in the midst of the action.

Conor McGregor’s star has slightly faded over the past few years, but he’s still one of the best pulls from the latest UFC Panini release.

This time, we’re looking at the base Concourse card, which comes with Lucky Envelope parallels, as well as Prizms and Disco Prizms that are serial numbered.

It features an action shot of McGregor as he unleashes a shoulder strike against the hapless Donald ‘Cowboy Cerrone in a 2020 victory. We’d also keep an eye on the Premier Level card (#199), thanks to a great horizontal shot.

The collection relies heavily on subsets, and all three of the Concourse, Premier Level and Octagonside cards have a range of parallels.

Of the many parallels on offer, Silver Prizms and Zebra parallels are defined as ultra-rare.

Inserts are provided in the form of country-specific Global Icons, as well as Grapplers and Strikers. They’re available as Silver Prizms, Black Prizms and Gold Prizms.

Hobby boxes have three total hits, two of which are autographs. It also averages out to one Prizms parallel per pack.

You’ll probably have to spend roughly $1,000 if you want to add a 2021 Panini Select UFC Hobby Box to your personal collection at the current time of writing. (that’s according to the resale market, and auction sites like eBay.)

The addition of fighter autos and a premium feel do offer some explanation for the high price tag, but it’s still ridiculously expensive for the average UFC fan.

They’ve probably priced the average collector out of buying a box, so it might be better to buy any cards you want directly.

Panini hasn’t wasted any time when it came to putting their new image rights to use. The 2021 Panini Select UFC Hobby Box is undoubtedly seen as a premium release, at least judging by the price tag and the going rate for parallels on the resale market.

The box itself looks to be a solid investment if you plan to keep it closed, although there are a variety of massive hits that are likely to be worth a lot in the future.

It’s a high-risk, high-reward scenario that will depend on the parallels and autos contained within.

Any questions in regards to the 2021 UFC Select Set can be directed to info@goldcardauctions or our FB Page.