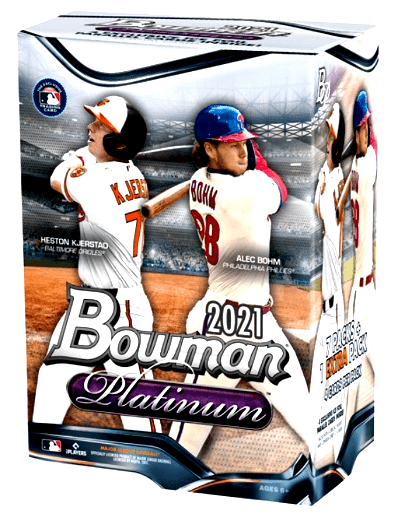 Typically a Walmart exclusive, 2021 Bowman Platinum is a wallet-friendly option for baseball fans.

The 100-card base set and 100-card Top Prospects line are complemented by a total of two autographs per Mega Box.

Here’s everything you need to know about the 2021 Bowman Platinum Baseball set, including some of the top cards, parallels, and what to expect price-wise.

As a newly released set packed with prospects, there’s a wide mix of cards to look out for.

There’s a solid aftermarket for Francisco Alvarez collectibles, especially after a graded Orange Shimmer parallel of his 2020 Bowman Chrome RC recently sold for a flat $4,000.

His Bowman Platinum card is a solid auto, backed by an action shot of Alvarez in a batting stance. It’s found within the Top Prospects subset.

There’s also a range of colored parallels, including a one-of-one Foilfractor.

A die-cut auto featuring a future Hall of Famer, this subset is serial numbered, and there are Aqua parallels to look out for with this Miguel Cabrera insert.

As with the RC above, there’s also a one-of-one Foilfractor.

The Platinum Die-Cuts collection is worth a look if you’re interested in signed cards, although the nature of the design makes it susceptible to showing off any edging flaws.

Fernando Tatis Jr. continues to be one of the biggest names in the hobby. A game-worn patch can be found in the 2021 Bowman Platinum set, and its serial-numbered to go along with a single Foilfractor parallel.

The horizontal design sees the patch on the right-hand side, with an image of a running Tatis Jr. on the left.

You’ll find the serial number above the player image, and it’s limited to only five copies.

Moving on to the legendary Mike Trout, we think that the Platinum Etchings subset is a great place to look for valuable collectibles featuring the player.

Wrapped in a foil finish, this is another card that is going to be tough to find in mint condition.

It’s serial-numbered to 25, with a strong orange background that really helps the image to pop.

This Trout insert has to be seen as one of the hits from the set.

Ke’Bryan Hayes could be the breakout star of the season, showing off his abundant talent for all to see.

His RC is found within the base set, so there’s an abundance of parallels to search for.

The Pittsburgh Pirates star is another heavy hitter from the set and could prove to be a shrewd investment if you have faith in his ability to live up to his potential.

Aside from Ice Foil Parallels which are a Blaster box exclusive, you’ll be able to find the full range of parallels and inserts included with each subset in the 2021 Bowman Platinum release.

Here is a full list of base set/Top Prospect parallels:

This includes the new Aqua Ice Foilboard edition, which is numbered to 250 copies.

You’ll also find five image variations each from the base set and Top Prospects, so don’t be alarmed if you spot a different action shot.

These also have Purple, Green, Orange, and FoilFractor parallels.

It’s a strong selection and includes a couple of inserts that made the list above.

A retail-only release, the 2021 Bowman Platinum Mega Box is one of the cheaper options on the market. Consider the recommended retail price (RRP), which firmly places it within the ‘affordable’ bracket:

The same can’t always be said for the resale market, and you would expect to see a slight discrepancy in price.

For now, you’ll be able to pick up a 2021 Bowman Platinum Mega Box from the likes of eBay for a similar price to the RRP, which makes sense as it only came out this month.

(A number of boxes have actually sold for less than the RRP in recent days, as hundreds began to flood auction websites.)

In many ways, the Mega Box is an affordable hobby option of sorts. We’ll have to wait and see what the price settles at once suppliers begin to run out of stock.

You can’t go wrong with such a low price tag, and there are a number of valuable serials numbered autos and hits if you’re tempted to crack a 2021 Bowman Platinum Mega Box.

It’s unlikely that you’ll find a card worth four figures outside of the rarest parallels, but we’d keep an eye on the Ke’Bryan Hayes RC if you’re interested in the possibility of future returns.

From an investment perspective, the Mega Box is great if you’re just starting out within the hobby, or if you’d like to stick with a budget-friendly option.

There are also lots of cards that can be grabbed with a view to holding for the long term, with decent potential returns depending on the player/parallel selected.

Overall, the 2021 Bowman Platinum collection is a decent retail-exclusive set, packed with the latest RCs and a variety of fresh inserts.

It’s a cut above the usual Walmart sets, even if it’s priced extremely competitively.