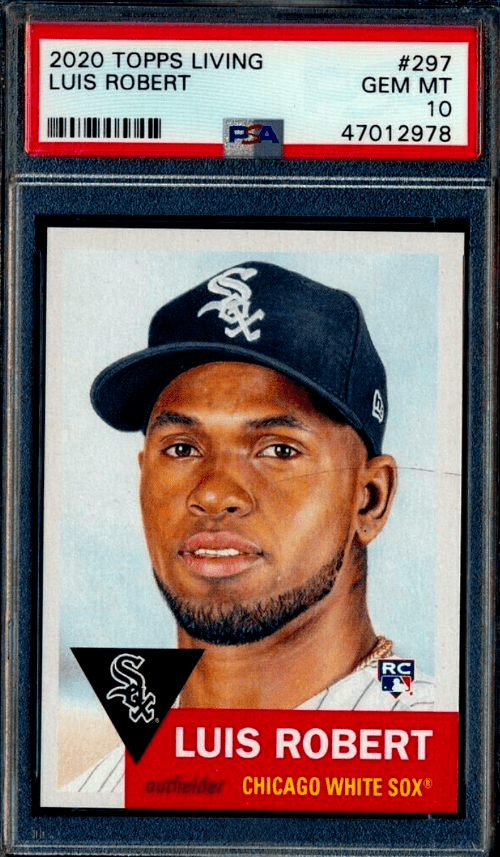 First released in 2018, the Topps Living Set pays tribute to the ‘53 Topps design with crisp images of hand-drawn artwork from legendary artist Mayumi Seto. Instead of a standard release that lasts for a year, the online-exclusive Topps Living Set Baseball has no clear end in sight. This means that in theory, the cards could continue to be released forever.

It’s clearly a head-turner, but what’s the deal with a strange set that sees new cards issued almost every week? The cards are typically separated by the year in which they first came out, so there are Topps Living Set cards for 2018, 2019, and 2020 so far.

Here’s a rundown with five of the top cards from the 2020 Topps Living Set, as well as an investment outlook if you’re thinking about adding a copy to your collection.

Originally, each card was sold for one week with three new cards announced every week. This dropped to two new cards beginning with card #253, which was towards the latter stage of 2019.

Each of the cards in the set has a red box containing the player name, position, and team located in the bottom right corner. You’ll have to keep an eye out for chipping, as it’ll make a major difference in terms of the overall grade it can achieve, as well as the asking price. 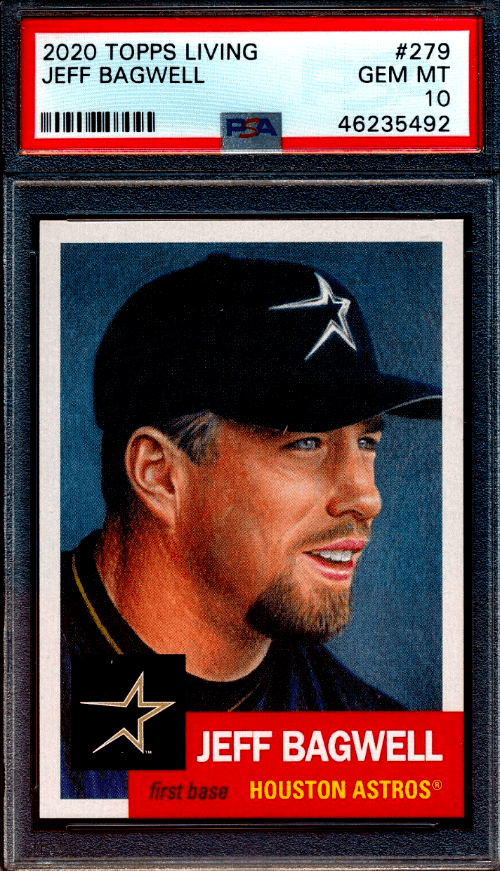 The NL MVP in ‘94, Jeff Bagwell is a retired former baseman and coach who spent his entire playing career with the Houston Astros. He was the Rookie of the Year in 1991, while he’s also a four-time All-Star. Allegations about steroids dogged his later career, and he entered the Hall of Fame in his seventh year of eligibility on the BBWAA ballot, with 86.2% of the vote.

His 2020 Topps Living features Bagwell looking off to the left, wearing a hat with a vintage Astros logo. (You’ll find the same logo at the base of the card.) It has an understated blue background, ensuring the emphasis is on the player alone. Gem mint versions of his 2020 Topps Living card are reasonably inexpensive, but they have been attracting bids at auction. 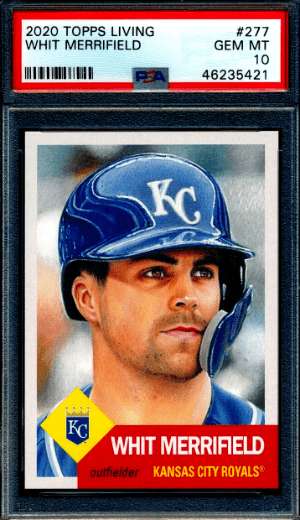 If you’re in the mood for something slightly more modern, there’s always Whit Merrifield. He’s been with the Kansas City Royals since 2016 and managed to make his first All-Star appearance in 2019. He’s arguably their most indispensable player, as a super-utility man with the ability to play all over the field, along with his notable skills at the plate.

Merrifield is fighting for attention in his Topps Living Set card, with his shiny KC helmet taking up the majority of the image, as well as being the first thing to catch the eye. The player is wearing a stern expression underneath, while the yellow from the Royals logo also clutters the front to an extent.

Luis Robert is a young outfielder for the Chicago White Sox and is quite possibly their most hyped prospect overall. Back in 2017, he was the top-rated international prospect in his class and earned a $26m signing bonus with the White Sox. At the time, it was the second-highest in history. We’ve been waiting for almost three years, but he’s finally getting time on the plate in 2020.

Another beautifully drawn profile picture is found on the front of Robert’s Topps Living card, which features the player in a White Sox hat as he looks down at the camera. There’s an RC logo at the bottom, while it’s worth noting the attention paid to light and shading, which really helps to make this card stand out from the typical RC options on the market. 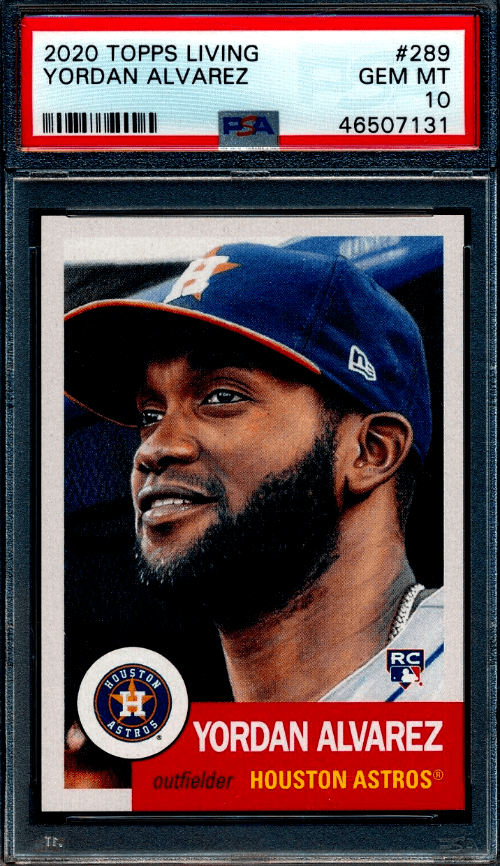 Houston Astros’ first baseman and outfielder Jordan Alverez is seen as one of the most hyped players in baseball, as the reigning AL Rookie of the Year enters his second season in the Major Leagues. He must have half an eye on Bagwell’s many records for the franchise when it comes to home runs and runs batted.

The card has a simple white border, with an image of Alvarez decked out in his Astros gear, with a stadium making up the background. There’s also an RC logo found at the bottom, which helps to make it a more interesting prospect for potential collectors. 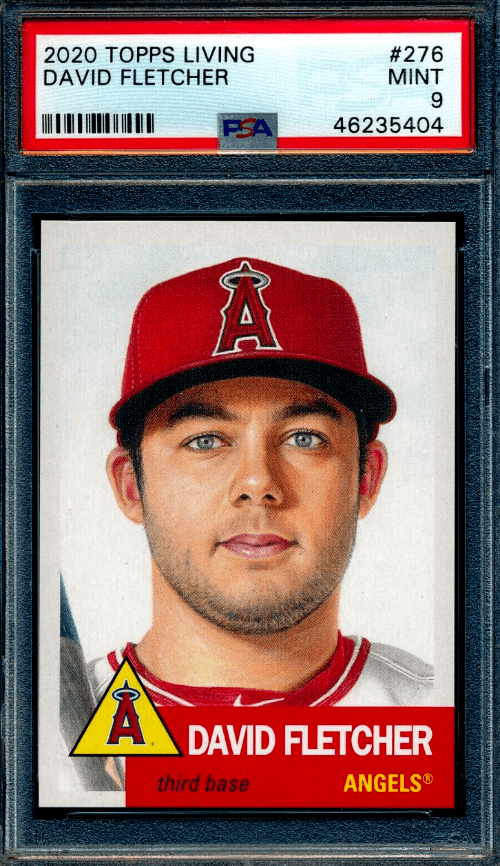 David Fletcher is an infielder who made his MLB debut in 2018 with the Los Angeles Angels, after being drafted by the team in the sixth round of the 2015 draft. ‘Fletch’ was a Gold Glove candidate at third base last season, and is seen as a potential All-Star by Angels manager Joe Maddon. Despite a small frame, he undoubtedly has the talent to make waves in the next few years.

The final card to make the list is another incredibly illustrated option, with a simple red and white design that really shows off the detail in Seto’s drawings. Fletcher is shown in a profile shot, facing towards the camera so it feels like he’s looking at you. PSA 10 copies are already selling in the low three-figure range, so it’s one of the better investment pieces.

The Topps Living Baseball set is a strange one, but there has been some traction in terms of the prices of the better cards that have been released so far. They’re all highly condition-sensitive thanks to the red tab at the bottom, while many saw fewer than 3,500 in their print run. Take the time to find gem mint copies when possible.

The cards are undoubtedly stunning to look at, which does make a difference, while there are a number of RCs which are reasonably underpriced. If Topps decides to continue with the set in the foreseeable future, there’s every chance that they will continue to be a viable investment option in the next few years.