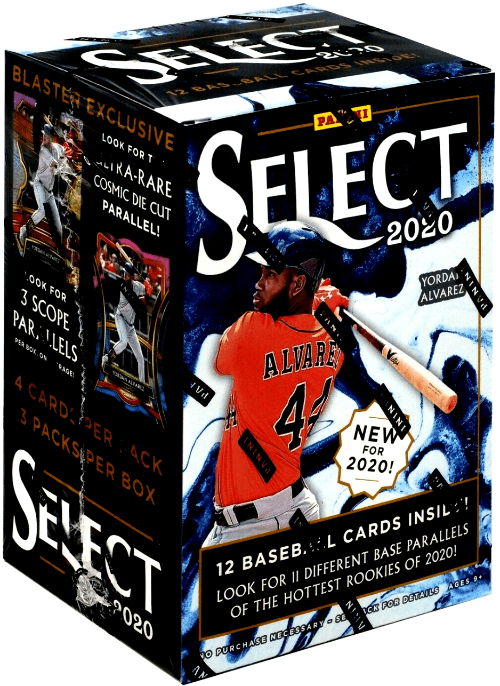 Panini Select Baseball is finally back, last seen as a standalone release in 2013. It’s certainly been a while, and collectors seem to have taken to the chromium set due to the tier-based system and the strength of the 2020 class.

We’ve come up with a list of ten top cards to be on the lookout for, along with everything you need to know about the set itself.

The Panini Select set seems to offer good value for money, priced at $120 per Hobby box, while there are nine additional insert sets. There are heaps of parallels, with new and returning favorites such as Tie-Dye, Gold Vinyl, and a recent addition in the form of striped Zebra cards.

Base cards are split into three tiers, which are Base, Premier, and Diamond Level. If you take a look at recent prices for some of the better options, it’s obvious that collectors have bought into the set, and it looks to be one of the more interesting baseball hobby boxes midway through 2020.

We’ve taken a number of factors into account when deciding on the best ten cards overall. Pricing, popularity, the player, and the potential for a decent ROI have all been considered to make up the list.

Jasson Dominguez is a Dominican outfielder who is currently signed with the New York Yankees. Ranked as the top international prospect in 2019, he joined the Yankees in a record $5 million deal.

With a base card numbered to just 149, and a host of interesting parallels, it’s easy to see how Dominguez’s card manages to make it onto the list. Versions such as the Tri-Color have already picked up in price rapidly, selling for significant three-figure fees. 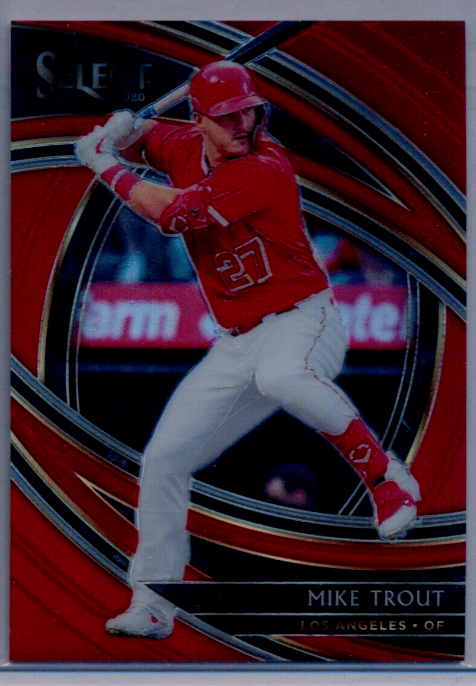 The Angels might be struggling at the moment, but that’s not because of Mike Trout. The player is always part of the conversation when it comes to arguing about who is the greatest of all time, with a collection of accolades and awards that are too numerous to list.

This card is from the Premier set, so it comes with a massive list of parallels that change with the elaborate border color. Trout is pictured with one foot in the air, and it’s an eye-catching option if you’re looking at the shiny parallels.

The NL Rookie of the Year in 2017 and a two-time All-Star, Cody Bellinger is another player that should definitely be on your radar. In more recent years, he earned the NL MVP award in 2019, cementing his status as one of the better players in the league.

The Launch Angle Autographs set features a great etched image of Bellinger staring up at a ball in the sky, with the bottom section devoted to a large stickered auto. It’s one of the more affordable options on the list and could make for a decent risk-free investment piece. 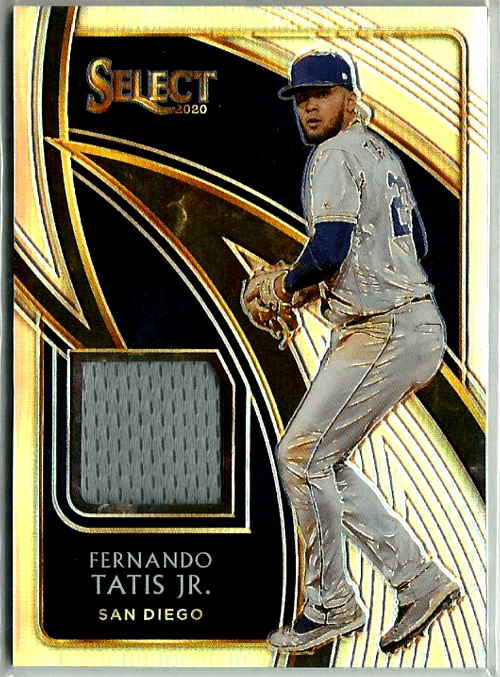 Fernando Tatis Jr. made his debut with the Padres in 2019, after being ranked as one of the top prospects in minor league baseball. There’s still a lot of hype surrounding his signed cards, and this one is no different!

Another card from the Signatures set, there’s an etched action shot of Tatis Jr. in the middle of the card, while it has a unique border design. The stickered auto is pretty obvious, and it’s found at the bottom. 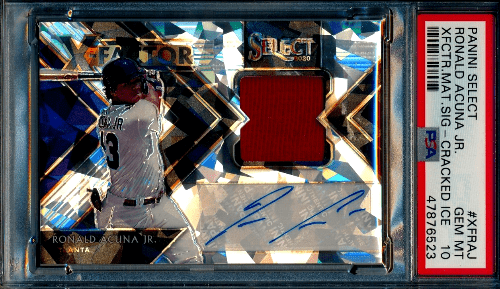 Next up is Ronald Acuna Jr. He was named as the NL Rookie of the Year in 2018, going on to make his first All-Star appearance just a year later. Once again, his cards are always popular with investors and collectors, who expect him to continue his strong performances for the foreseeable future.

His card from the X-Factor Material Signatures set is a landscape option, with the only real drawback being an obvious stickered auto which gets in the way of the strong background design. There’s a large square player patch on the right-hand side, while the Cracked Ice version is probably the best-looking overall.

Yordan Alvarez made his debut with the Houston Astros in 2019, going on to be named as the AL Rookie of the Year. Yet again, his cards are some of the more hotly contested options from the set.

The second card from the Launch Angle Autographs subset to make the list, it also features an etched image of Alvarez taking the time to enjoy his work after a successful swing. There’s a stickered signature at the bottom of the card, and it’s pretty affordable considering his popularity with fans and collectors.

Another hyped rookie, Luis Robert signed a six-year, $50 million contracts with the Chicago White Sox before appearing in a major league game, before going on to make his debut in July 2020. The contract should give some indication of how valued he is, and the same goes for the majority of his signed cards.

As with all of the options in the Rookie Signatures set, Robert’s card has a strong image and a couple of interesting parallels such as the Cracked Ice and the Tri-Color versions. It’s still reasonably affordable as of now, but that could change depending on how he performs in 2020. 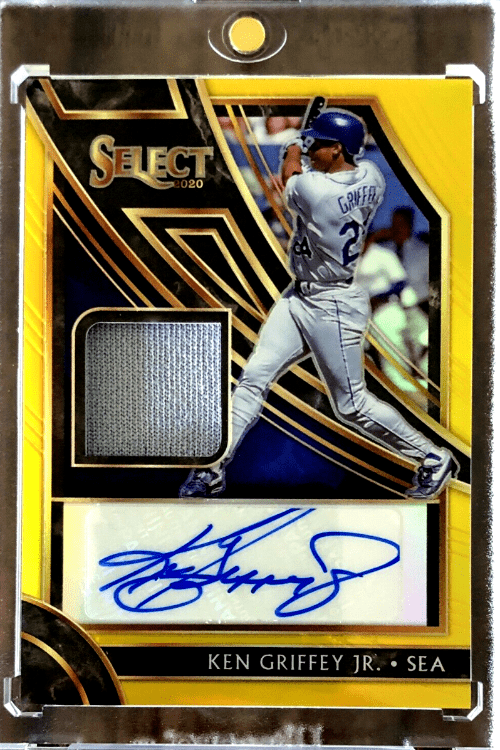 Ken Griffey Jr. was a 13-time All-Star over a 22-year career, predominantly featuring for the Seattle Mariners and Cincinnati Reds, along with a short stint with the Chicago White Sox. The AL MVP in ‘97, he was also the NL Comeback Player of the Year in 2005.

Griffey Jr’s card is from the Signature Materials set, so there’s an etched image of the player in the top right, after a successful swing. There’s a player patch in the middle, and you’ll find a discrete stickered auto at the bottom. His collectibles are always popular, so we’d keep an eye on some of the rarer parallels.

Bo Bichette is a hyped power hitter who was promoted to the Major Leagues by the Toronto Blue Jays in 2019. The shortstop is still a youngster and set numerous franchise records as he finished the 2019 season hitting .311 with 11 home runs in 46 games.

The Hot Rookies subset has a great Bichette card that is pretty affordable, while the die-cut parallels offer something different to the others on the list. They come in a couple of great designs, with a large image of the player after a successful hit. You’ll have to watch for any wear and tear on the edges, but it’s another top card.

Veteran center fielder Lorenzo Cain is a World Series winner, a two-time All-Star, and he has won two Wilson Defensive Player of the Year Awards. His card is one of the more affordable options to make the list, and it could be a canny investment piece.

From the base set, Cain’s card features a great image of the player with a bat held ready in both hands. His face is slightly obscured due to the helmet, but it’s still a great choice overall. There’s also a wide range of parallels to choose from.