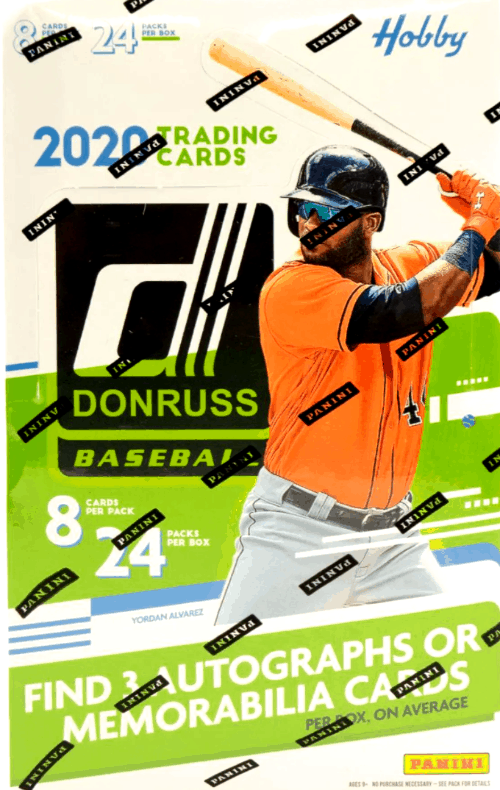 Released March 2020, the latest Donruss Baseball set has a mix of ‘Rated Rookies’ and rare parallels, while the Retro 1986 goes back 34 years to honor the ’86 Donruss design.

They’ve gone with emojis for the base parallels, which is a strange design choice, but it’s set to make 2020 an unforgettable year.

The new parallels are as follows;

Here’s a rundown with 10 top cards to look for in the 2020 Donruss Baseball set.

There are 264 cards overall in the base set. They are;

Almost every subset is represented below, and the cards come in at a range of different values. There’s an investment piece to suit every budget, so let’s begin with one of the hottest players in the baseball card hobby right now. 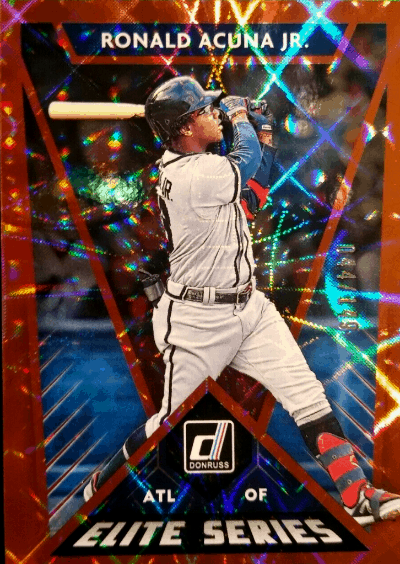 Ronald Acuna Jr. made his MLB debut in 2018, going on to be named as the NL Rookie of the Year. In 2019, he was an All-Star, the NL stolen base leader, and also earned the Silver Slugger award. His cards are always valued highly by collectors.

The first card on the list is from the Elite series set, of which all of the 13 base cards are serial-numbered to 999. Acuna Jr’s card features an action shot of the player after a successful swing, with a unique background design that actually cuts one of his legs off slightly. As with the majority of the cards on this list, parallels are plentiful. 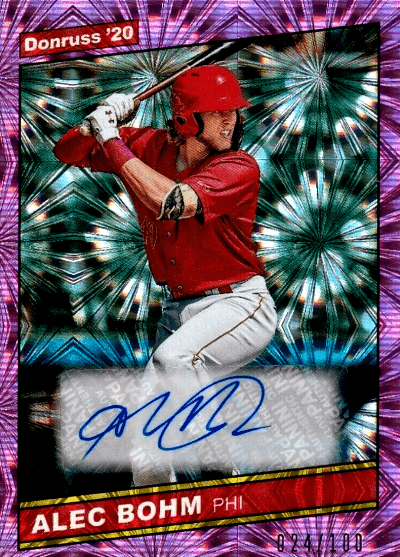 Alec Bohm is a prospect who was picked third overall by the Philadelphia Phillies in the 2018 draft. He made his MLB debut in August 2020, going on to hit his first MLB home run a week later.

We’re looking at Bohm’s Retro 1986 Signatures Set card, which features a simple image of the player waiting to bat. It has a grey and black lined border which is more susceptible to chipping than normal options, and it has a large auto found at the base of the card. 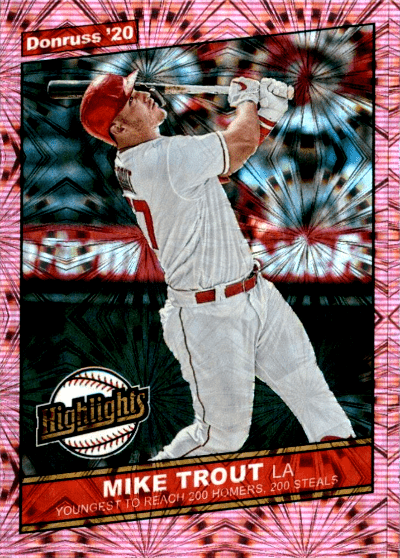 The undisputed GOAT, Mike Trout is a LA Angels legend who has been with the team since being drafted in 2011. He was the AL Rookie of the Year in 2012 and has been an All-Star every season since 2012.

From the Highlights subset, the base version has only 999 copies, with a great action shot of Trout doing what he does best. It’s not his most expensive card, but there’s a good chance of profit if you’re willing to hold onto it as a long-term investment. 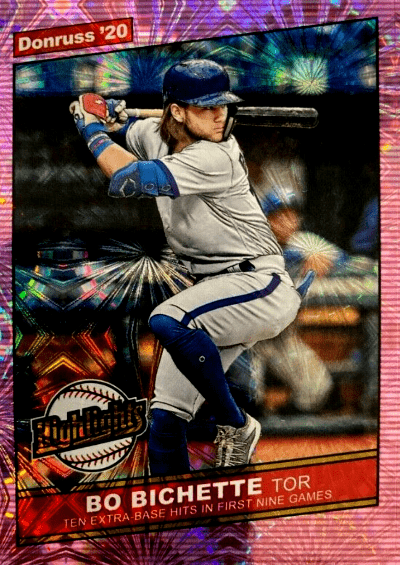 The son of four-time MLB All-Star outfielder Dante Bichette, Blue Jays shortstop Bo Bichette is another hyped youngster who made his debut in 2019.

This card is also from the Highlights subset, featuring an image of the player as he stands ready at the plate. One of the more affordable options, we’d lookout for high graded versions of the rarer parallels. 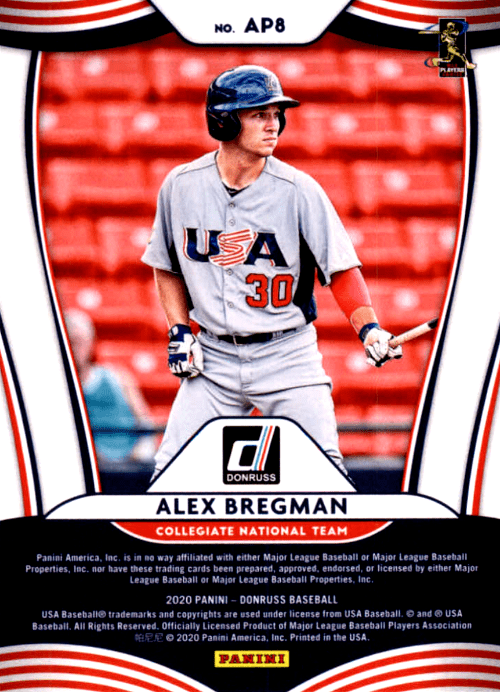 Coming from the American Pride USA Baseball Set, this double-sided card features two great players in Alex Bregman and Spencer Torkelson. Each player has a side devoted to an image of the player in their collegiate national team jerseys, with Torkelson on the front.

The base version is numbered to 999 copies, while there are various rare parallels to be on the lookout for.

Next up is Christian Yelich. Originally signed with the Miami Marlins, he joined the Brewers in 2018, and he has made two All-Star appearances in as many years. The NL batting champion in 2018 and 2019, Yelich is currently in the form of his life.

His card from the Elite Series is an affordable option, even when looking at colored parallels. It has a strong image of Yelich, with his legs making way for the card logo found at the bottom. 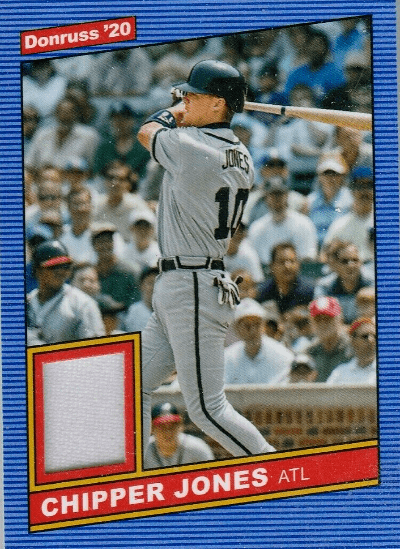 The only retired player to make the list, Chipper Jones is an eight-time All-Star who spent his entire career with the Atlanta Braves. He’s the only switch hitter to accumulate 5,000 at-bats and finish with at least a .300 batting average, .400 on-base percentage, and .500 slugging percentage.

From the ‘86 Signatures Set, it features a great vintage image of Jones with a bat in hand, staring at a successful hit as it soars through the air. You’ll find a stickered auto at the bottom, with the familiar Donruss ‘20 logo at the top.

The AL Rookie of the Year in 2018, Shohei Ohtani made the switch from Japan to join the LA Angels in 2018. Another popular player, his rarer cards are typically good long-term investment pieces.

His Sky High Signatures card is another great option, with a crisp landscape design and a signature from ‘Sho Time’ found at the bottom. It’s meant to look like a billboard, with a blue sky background and a smaller image of the player. Unlike others from the set, his Gold parallel is numbered to 10 copies rather than 25.

Fernando Tatis Jr. is a hyped rookie who made his debut with the San Diego Padres in 2020. Rated as one of the top prospects in the sport by the likes of MLB Pipeline, ESPN, Baseball America, and Baseball Prospectus, he has a lot to live up to.

The Classified Signatures Set has a dossier style-design, mimicking classified spy documents. There’s a great shot of Tatis Jr. in the top left corner, with a stickered auto-filled in blue ink, and a serial number found on the front for the rare parallels.

Last, but by no means least, Cody Bellinger is a two-time All-Star and the 2017 NL Rookie of the Year. He won both the Gold Glove Award and the Silver Slugger in 2019 and set a new MLB record for a player in his first year of arbitration when he agreed to an $11.5 million, one-year contract with the Dodgers for the 2020 season.

Part of the Classified Signatures Set, it has the same dossier design found with the others, along with an action shot of the player in the top corner after a successful hit. There’s a stickered auto at the bottom which drives further interest, and there is also a trio of low numbered parallels.