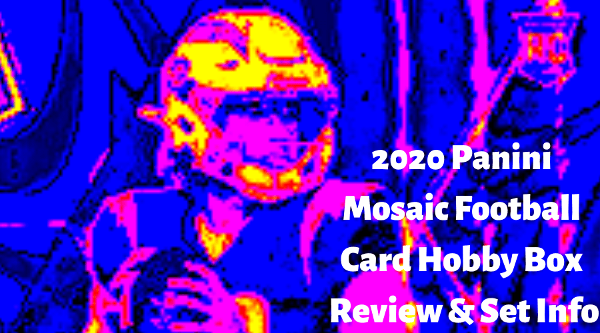 We recently reviewed the 2020 Panini Mosaic Football Hobby Boxes (Blaster Box, Mega Box) and we ripped open some 2020 Mosaic Football Cello Fat Packs. Boy was this a fun review and made possible by Amy S. over at Panini.

While acknowledging the most valuable cards, presented the set’s parallels, and discussed the most desirable places to buy blaster boxes.

Let’s delve right into the 2020-21 Panini Mosaic Football Hobby Box, offer our top three cards, and address the brass tacks and quality of the set.

In our analysis of 2020 Panini Mosaic Football, we honed in exclusively on the Blaster Box. Though because this article focuses on the set in its entirety, it opens the door to potentially more valuable parallel cards that blaster boxes didn’t carry.

According to eBay, here are the three most valuable cards from 2020 Panini Mosaic Football:

Keep in mind, none of these three cards is serial-numbered. However, due to the success of both players in their rookie seasons, their rookie cards became valuable and sought-after by collectors.

Similarly, Joe Burrow had a solid rookie year for the Cincinnati Bengals. In Burrow’s rookie season, which was cut short in Week 10 due to a torn ACL and MCL, he threw for 2,688 yards, 13 touchdowns, and five interceptions. Burrow finished the year ranked 7th in the NFL with 268.8 passing yards per game.

With Herbert’s and Burrow’s success on the field in their rookie campaign, the top three cards from the 2021 Panini Mosaic Football set are likely to star rookies who dazzled in their rookie seasons.

While the 2021 Panini Mosaic checklist has yet to be released, we anticipate the top three cards from the set to highlight the Rookie Autographs of Ja’Marr Chase, Mac Jones, and Najee Harris.

Through his first nine games of the season, Ja’Marr Chase has 835 receiving yards on 44 receptions, averaging 19 yards per catch and 92.8 yards per game. Through nine games, Chase has caught seven touchdowns from Joe Burrow this season. Chase ranks 3rd overall in receiving yards and has the most 40+ yard catches of any receiver this season with six.

Mac Jones has led the New England Patriots to a 5-4 record in the early going, with 2,135 yards, 10 touchdowns, and seven interceptions. Mac Jones has excelled with his completion percentage, completing 68% of his passes, good for 8th best in the NFL.

This season, Najee Harris has 150 rushes for 541 yards for the Pittsburgh Steelers, averaging 3.6 yards per rush. Harris is averaging 67.6 rushing yards per game, good for 12th in the league. He has also rushed for four touchdowns and has caught two receiving touchdowns just halfway through the season.

While the 2020 Panini Mosaic Football set emphasized various configurations, including but not limited to a Hobby Box, Hobby Choice Box, Mega Box, and Blaster Box, Panini has yet to announce the assorted arrangements and boxes available.

The 300-card checklist will emphasize rookies and veterans.

Additionally, collectors will be chasing the abundant parallels of the set, including:

Returning inserts from the inaugural release of 2020 Panini Football include Stare Masters and Center Stage, and making its first appearance to the set is the Straight Fire insert with the following parallels:

As we mentioned previously we love the modern design of the 2020 Mosaic football cards and in particular the rookie card parallels.

Here are a few of our favorite 2020 Mosaic rookie card parallels from a combination of ROI and design. 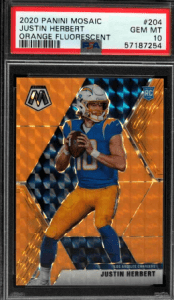 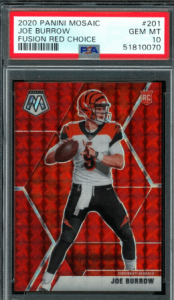 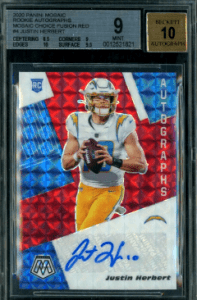 In terms of design, the 2020 release is fitting of the Mosaic brand throughout the checklist.

This year, the Straight Fire insert is a novel addition and illustrates an alluring flame blazing in the backdrop.

Finally, the 2020 Panini Mosaic Football set features short-printed stunning Canton busts. The busts will be die-cut to illuminate the statues of the Hall of Famers. While we don’t yet know which Hall of Famers will be featured, it’s not out of the question that the recent Pro Football Hall of Fame class of 2021 featuring Peyton Manning and Charles Woodson would receive an appearance.

There is a strong possibility that the top offensive rookies of the 2021-22 NFL Season, highlighting Ja’Marr Chase, Mac Jones, and Najee Harris, will be the most coveted rookie cards of the set.

As we expect the trend to continue, collectors are counting down the days until the release of 2021 Panini Mosaic Football to get their hands on some of the top rookies from the 2021-22 NFL season.

What are 2020 Panini football cards worth?

Are Panini Mosaic cards worth anything?

The amount of Panini Mosaic cards will depend on the year of the card, sport, and card grade (if graded). For an estimated value of any Mosaic sports card please email value@goldcardauctions.com.

Does Walmart sell Mosaic football cards is one of the more popular questions we receive. And the answer is Yes, although they sell out within a matter of hours in many locations.