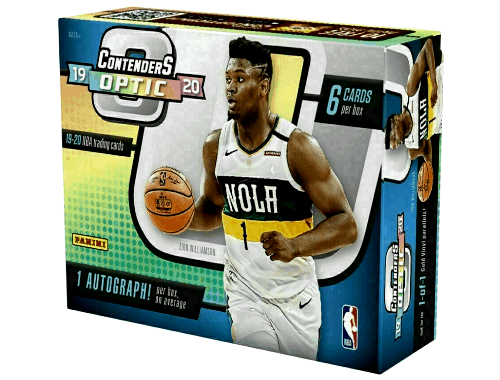 The Panini Contenders Optic set is back for 2019-20, featuring top NBA stars and rookies with a range of rare parallels.

Here’s everything you could possibly need to know about the Contenders Optic set, including a review, ten top cards to look out for, and investment advice if you’re tempted to pick up a copy or two.

The second-ever Contenders Optic release, there’s a collection of parallels and signatures which have already started to increase in value rapidly. It came out in September 2020, and you’ll find 6 cards per pack, 1 pack per box, and 20 boxes per case.

Despite its relative infancy, the early signs do look promising. As you’ll see below, there’s a range of exciting subsets and inserts, ranging from affordable to a low five-figure range. It’s still new, so prices have yet to settle properly.

We’d pay special attention to the Rookie Tickets, as well as some of the rarer parallels found below.

We’ve come up with a list containing ten top options from the set, which will be able to suit a variety of different budgets. 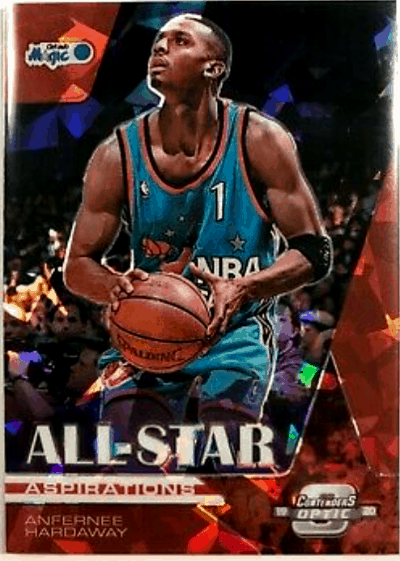 The All-Star Aspirations subset is new for this year, featuring 25 players from a range of different NBA teams. Anfernee Hardaway represents the Orlando Magic, where he spent the majority of his 16-season career. There’s a great action shot of Hardaway as he prepares to shoot, with an onlooking crowd behind him. 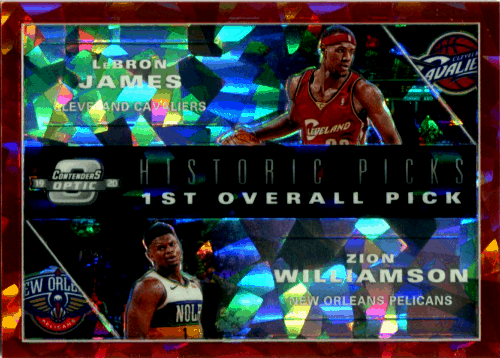 It’s hard to do better than two of the greatest players in the NBA right now. Zion Williamson is the future, and LeBron James is the present. Both players combine for this landscape card, split in half to focus on each one separately. It’s proved to be extremely popular so far. 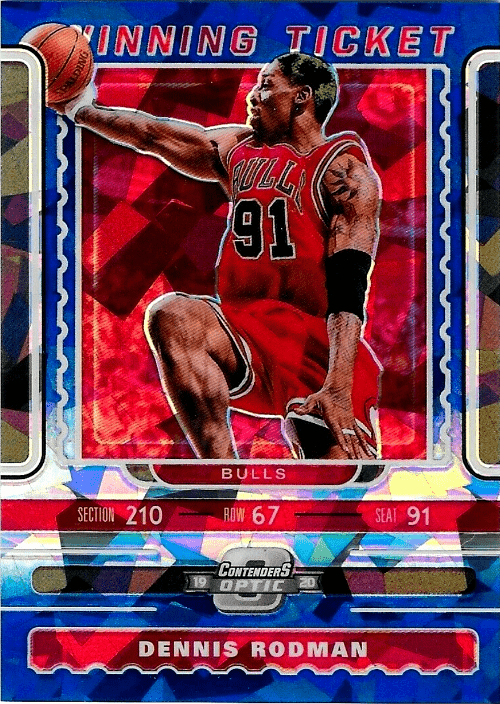 Dennis Rodman is better known for his ties to North Korea in more recent years, but back in the day, he was one of the most fearsome defensive plates in the NBA.

From the Winning Ticket subset, this card features a strong image of Rodman holding a ball in one outstretched hand. The reverse notes that he won a third straight title with the Chicago Bulls in 1997-98. 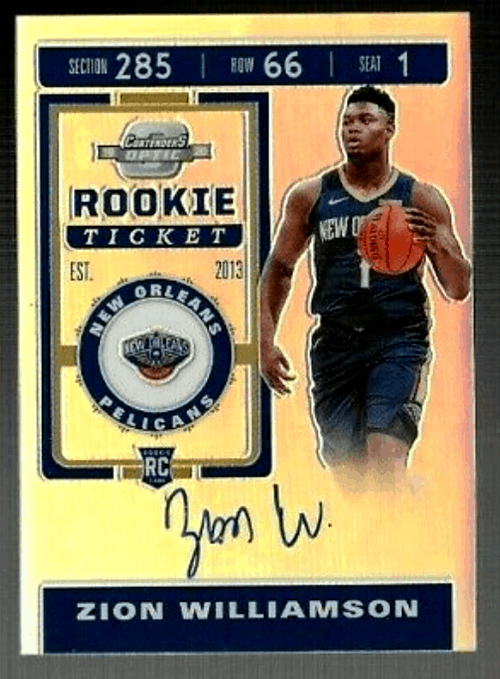 Williamson’s Rookie Ticket is undoubtedly one of the hottest picks from the set, and that’s before looking at the numerous rare parallels. It features an on-card auto at the bottom and an image of the player on the right-hand side. If it’s in good condition, copies will easily sell for four figures. 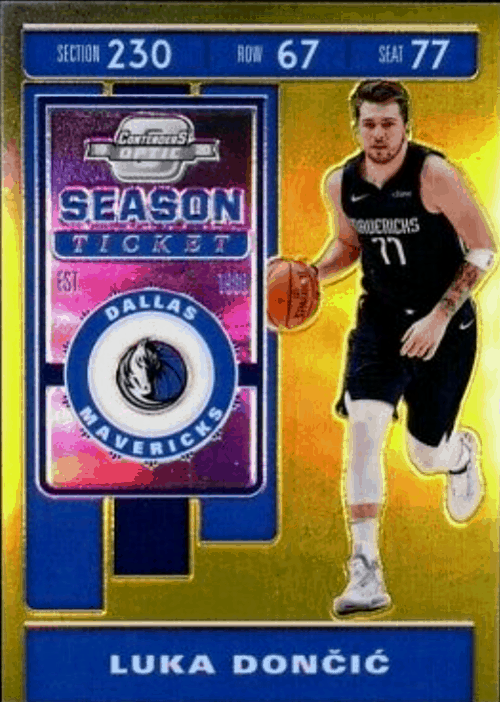 Luka Doncic is another highly-rated player from the base set, and his Season Ticket is next up on the list. It features an action shot of the player as he dribbles down the court, and there’s a variety of serial numbered parallels to keep an eye out for.

Heading back to the rookies, Ja Morant is another hyped youngster with a Rookie Ticket that is quickly becoming one of the most popular options overall. It has a typical RT design, while his 2020 Rookie of the Year win has helped the parallels to jump up into the four-figure range. You’ll be able to note variations by checking for a circled “V” on the back, under the NBA logo. 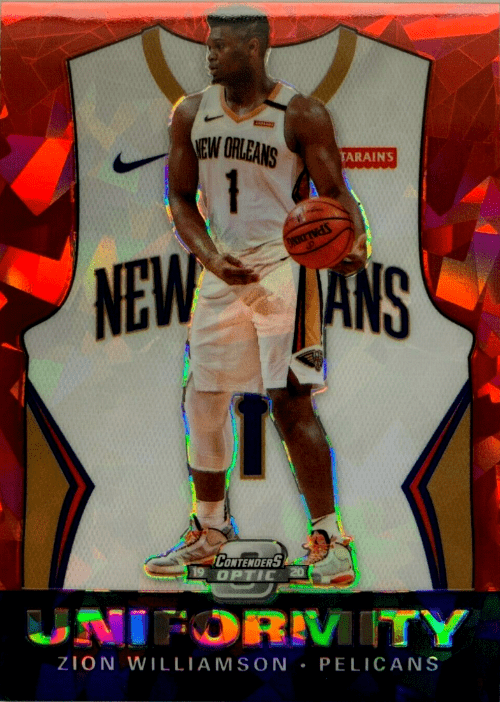 We’re looking at Zion’s Uniformity insert, which has a lined image of the player set against his New Orleans jersey. The Cracked Ice parallels are some of the more popular options from the entire set, and they’re affordable compared to other Williamson RC options. 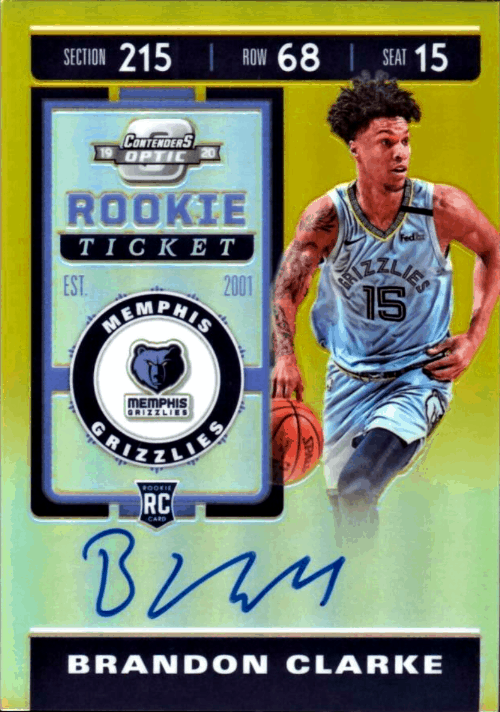 Brandon Clarke made the NBA All-Rookie First Team in 2020, so it’s no surprise that his Rookie Ticket makes the list. Once again, even the Gold parallel is relatively affordable, so it’s a great investment option if you’re looking at a quick flip. 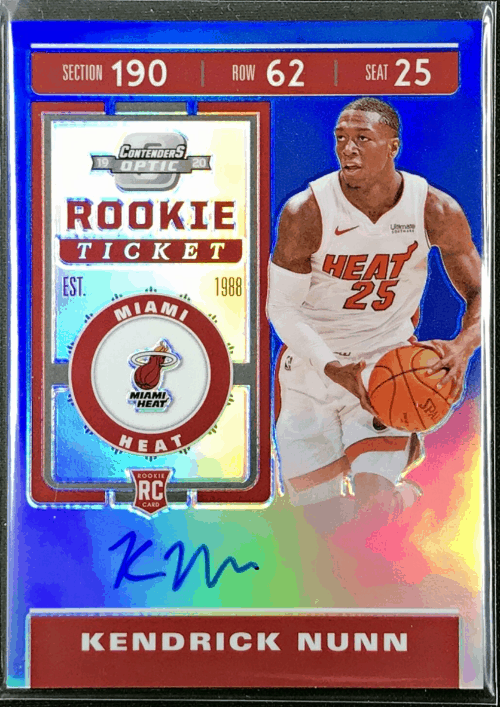 Another card from the Rookie Ticket set, Kendrick Nunn also made it onto the NBA All-Rookie First Team in 2020. As with the others, it’s signed at the bottom, and it’s already beginning to pick up in price after early listings. 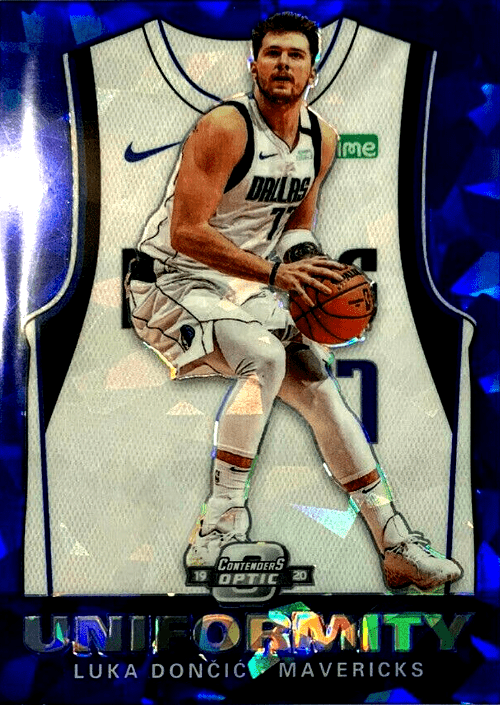 The second Uniformity insert, and the final option on our list, there’s a Dallas 77 backdrop found on Luka Doncic’s card. It has a lined image of the player with a ball clutched in both hands, with his name and team found on a tab at the bottom. Once again, the Cracked Ice parallels are a tempting investment piece.

It might be a newer set, but that hasn’t stopped the 2019-20 Contenders Optic release from being one of the better picks if you’re looking for signed basketball rookie cards.

Players like Zion Williamson, Ja Morant, and Luka Doncic help to carry the set, with a number of hits to look out for if you’re planning to open a box or two.

In terms of investment pieces, there are good options if you’re looking to flip quickly, while there’s no harm in holding onto them for the time being to gauge the market.