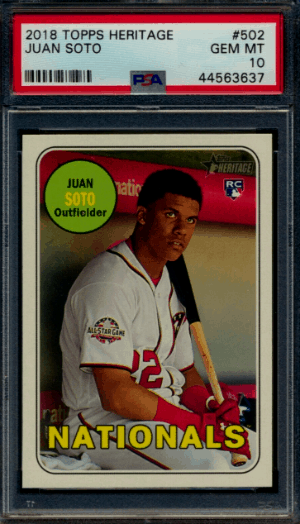 Somewhat confusingly, the Topps Heritage High Number set has 225 base cards, which run from #501 to #725 in the overall checklist.

It carries on from the 2018 Heritage base set, with lots of SP cards, parallels, and variations to be on the lookout for.

The overall theme is a ‘69 retrospective, so expect traditional options with a modern twist.

Here are five of the best 2018 Topps Heritage High Number cards which are currently available on the market, with a great mix of players and prices that will suit almost every budget.

Ronald Acuna Jr. and Juan Soto are the clear standouts from many 2018 sets, and the same is true for this release.

They both feature below, along with a great wildcard option.

We’d recommend looking at high PSA/BGS grades for the best possible ROI, although some of the cards are exceptionally expensive, to begin with. 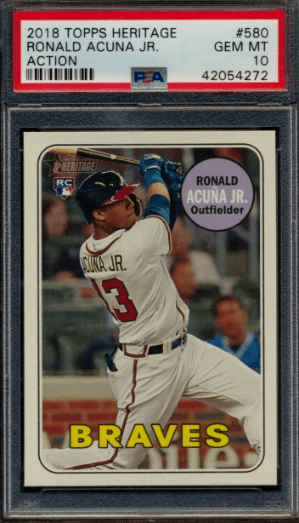 Ronald Acuna Jr. is an outfielder who plays for the Atlanta Braves.

The NL Rookie of the Year in 2018, he went on to make his first All-Star selection the season after.

In 2020, the Braves won the division for the third time in a row, earning a league-record 20th division title.

Acuna has been at the heart of their continued success, and his rookie cards are always popular with collectors and investors.

His RCs are some of the biggest hits from the High Number set, coming in thick and fast. Along with the parallels listed below, there are three image variations in total:

“The Black Border parallels offer the perfect mix of rarity and value, while the Action card is our personal preference” 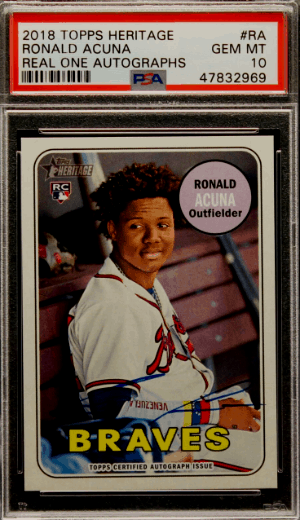 Next up is another shiny Acuna card, with the addition of an auto helping to add to the allure. It features a shot of the player as he sits on the bench, staring off-camera.

“As a ‘Topps Certified Autograph Issue’, you’ll find his name filled in blue ink at the bottom… It blends in ever so slightly, but it’s there if you look hard enough.”

As a 2018 Acuna card, it’s also an RC, so there’s a logo in the top left corner. Otherwise, it follows the theme of 1969, while there’s also a Red Ink parallel, which is highly coveted.

Another player who had his rookie season in 2018 was Juan Soto.

He won the World Series with the Washington Nationals in 2019 and went on to become the NL batting champion in 2020.

During the latter, he became the youngest player in National League history to win, hitting .351 during the regular season.

He’s in crazy form, and he keeps getting better, so his RCs should also be on your agenda.

His base card is similar to Acuna’s, in that it features a shot of the player as he sits on the bench, staring off-camera. 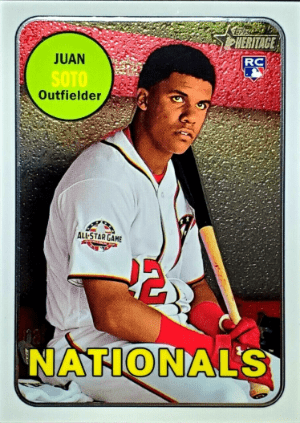 The second Soto card to make the list is a real head-turner.

From the Chrome set, it features the same image as the version seen above, so the player is seated once more, with a bat in hand.

However, the chromium finish helps it to stand out, while it also features a number of different parallels.

It’s one of the most valuable cards from the set, so it’s worth keeping tabs on prices. 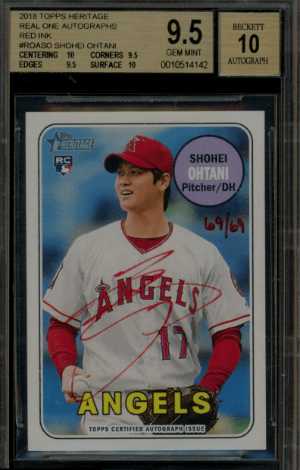 Shohei Ohtani was a late starter in MLB, having spent time in Japan with the Hokkaido Nippon-Ham Fighters.

He joined the Los Angeles Angels in 2018, going on to finish as the rookie of the year.

He’s significantly older than the others, which is why his RC is much cheaper than either Soto or Acuna Jr.

This makes it a great budget option compared to the younger players, even when looking at the special parallel version filled in red ink.

It has a classic feel, with a profile shot of ‘Sho Time’ with a bat held casually in one hand.

Containing a duo of highly-rated rookies with true star power, the 2018 Topps Heritage High Number set is clearly a premium release that has developed well over the past two years.

There’s a high price of entry if you’re looking at either Soto or Acuna Jr, but that could translate to massive profit if they continue to come up with the goods over the next few years.

Options like Ohtani are great if you’re operating within a tighter budget, and they still have the potential to rise if you’re looking at rarer options, such as the parallel listed above.

We’d strongly recommend any of the RCs listed above if you’re looking for investment pieces, especially when it comes to the scarcer parallels.