1997 was a great year for baseball cards, with low print numbers and amazing options wrapped in chrome of all colors. 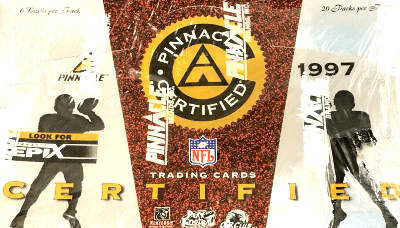 Pinnacle Brands might have gone out of business a year later, but that hasn’t stopped their ‘97 sets from doing well on the resale market in consequent decades.

Here are three of the most valuable 1997 Pinnacle baseball cards ever produced, as well as our top investment pick overall. 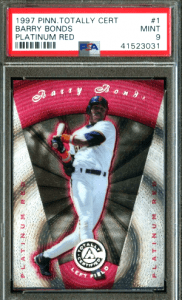 Barry Bonds is the first name to make the list.

Controversies regarding steroid use have affected the price of his cards ever so slightly, but that hasn’t dampened interest in the rarest options.

Bonds’ card is the first in the base 1997 Pinnacle Certified set, wrapped in silver and gold chrome as he smashes a ball in the action shot.

If you’re looking at the rare parallels, the serial numbers can be found stamped on the reverse. 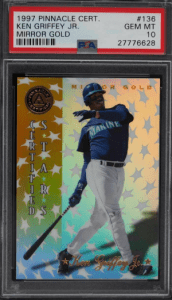 Any late 1990’s Ken Griffey Jr. card which is low number is always going to be tempting for collectors, and the same is true here.

From the base 1997 Pinnacle Certified subset called ‘Certified Stars’, the card is available in a trio of Mirror parallels.

PSA 10 copies of the Mirror Blue and Red versions are still fairly affordable, but the same can’t be said for the Gold version.

However, it’s impossible to confirm the actual print run, which is always dangerous from an investment perspective.

Griffey Jr. is a great player to collect, but we’d look elsewhere in terms of getting a good ROI. 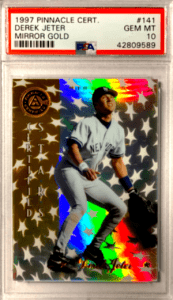 He easily takes the top spot on this list of the most valuable 1997 Pinnacle cards thanks to a copy from the ‘Certified Stars’ subset.

The one and only to have been given a PSA 10 grade, it’s one of the most expensive cards you’ll find in the set.

Once again, there’s no way to confirm the print run, which makes it riskier than it should be.

Most cards from the base 1997 Pinnacle Baseball set aren’t worth much, and it was blown out of the water by 1997 Pinnacle Certified.

The Certified set was a high-end 150-card brand that also came with a rarer parallel release, known as ‘Totally Certified’.

Cards from the Totally Certified subset fill the list for reasons that quickly become apparent.

For example, only 999 boxes were ever produced. The chromium-stock release featured a different photograph to the base edition and was printed on etched foil, with only three cards per pack.

As well as Platinum Red parallels numbered to 3,999, there are Platinum Blue cards with a print run of 1,999. (You’d get two reds and one blue per pack.)

However, the real hit was a Platinum Gold parallel (serial-numbered to 30) which was randomly inserted into packs.

As you might have guessed, this list of the most valuable 1997 Pinnacle Baseball cards is dominated by the Totally Certified subset and the gold parallels.