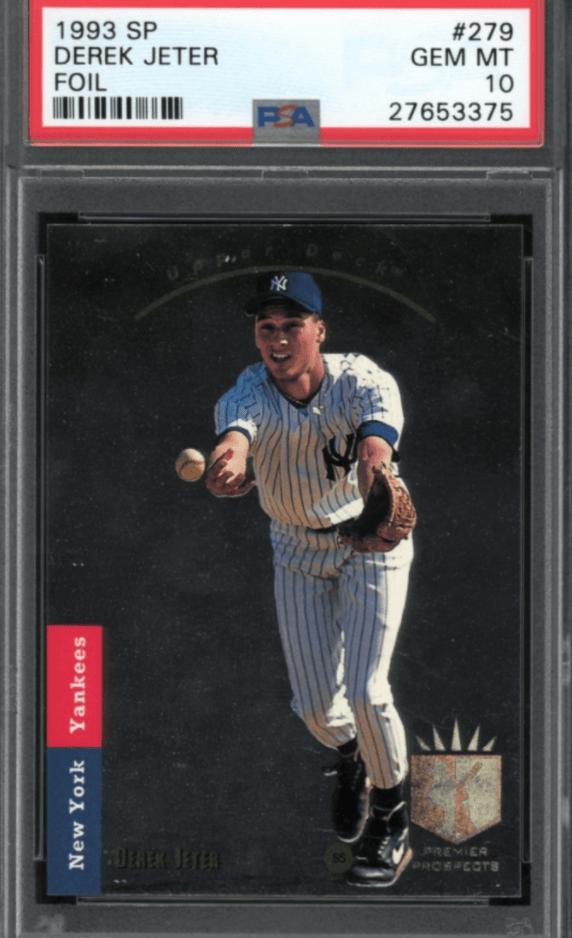 The offered card is Jeter’s most sought-after rookie and is rarely found in high-grade condition. The 1993 SP Foil card is free of chipping and the card has no wear on the corners.

The back is as clean as the front with no visible issues. Players like Jeter and cards like this are rare commodities. Consider that PSA has graded over 16,500 of these cards and have only given 22 Gem Mint 10s.

Now is your opportunity to own one of the hobby’s most sought-after modern cards in Gem Mint condition.

In closing, due to the highly-anticipated inauguration of Derek Jeter into baseball’s illustrious Hall of Fame, the associated euphoria has recently led to a PSA 10 1993 SP rookie subject fetching $168,000 with no end in sight for this card’s seemingly unlimited investment potential.

Memory Lane, Inc.’s analysis is spot on – it’s hard to find a Derek Jeter card of this magnitude on the market nowadays. Think about it: of the 16,500 1993 SP Derek Jeter #279 cards PSA graded, only 22 received the prestigious Gem Mint 10 rating. That represents a ratio of 0.001.

With his impending induction into the National Baseball Hall of Fame, the card gained serious traction over the past few months. We predicted Jeter’s cards will explode in value because of this development.

In fact, the $180,000 represents at least a five-fold increase in Derek Jeter baseball card prices in the last five years. Bear in mind El Capitan (Jeter’s nickname) retired in 2014. In the aftermath of his retirement, his rookie cards already sold in the five-digit range. Now that he’s about to become a Hall of Famer, their value has gone through the roof.

The best time to invest in his cards is now. With that in mind, the latest update on Jeter’s rookie card doesn’t surprise us one bit.

The auctioneer is right: the 1993 SP Derek Jeter #279’s investment potential is limitless. When Jeter makes his Hall of Fame speech in the summer, this card’s value could increase twofold (or maybe even higher). Whoever has this card is not only lucky, but he’s also a savvy investor.

While Jeter isn’t an official member of the National Baseball Hall of Fame yet, it’s almost a sure thing. We don’t see any reason why he can’t be a first-ballot Hall of Famer. He amassed many accolades during his illustrious 20-year MLB career, to wit:

1996 American League Rookie of the Year

MLB’s all-time leader in hits for a shortstop

Here’s the key takeaway: if a player of Jeter’s caliber and track record is knocking on the Hall of Fame door, invest in him asap. If you’re a staunch sports fan, your gut will tell you a player will make the grade (as opposed to somebody like Roger Clemens, whose controversial past has hindered him from becoming a Hall of Famer).

Jeter is one of the few baseball players who is a sure bet. No doubt about it. His glowing resume speaks for itself.

If you’ve been saving up for one of his rookie cards, don’t wait for them to reach the seven-digit mark. With the way things are going, it’s not a far-fetched possibility (while you’re at it, check out our five best Derek Jeter rookie cards for investment purposes).

On a side note, who wouldn’t want a Derek Jeter rookie card? Even if you’re not a Yankees fan, you must admit Jeter has massive media appeal – good looks, charm, and charisma. He has it all.

Imagine a Derek Jeter rookie card stacked with those of Mickey Mantle, Ken Griffey, Jr. (check out his rookie card investment report here), Dave Winfield, and Nolan Ryan. Not only do you get rookie cards with tremendous investment potential, but you get some of the most charismatic baseball players in MLB history. That’s something to brag about.

Jeter is about to join his fellow Yankee, Mariano Rivera (one of the best closers of all time), in the Hall of Fame. Rivera was the first unanimous selection. Will Jeter become the second one? It’s a likely scenario.

Jeter gave it his all on the field (remember the time he crashed into the stands at Yankee Stadium chasing a foul ball?). He played his guts out every night. We’re not surprised he played 20 years in the majors. After all, he’s not El Capitan for nothing.

Jeter’s inspiring play on the diamond made him a legend. While he hung up his baseball cleats years ago, he’s just getting started in the sports card investment market.

El Capitan was an icon on the baseball field. He will also become an icon in sports card investing.