The 1992 Upper Deck Basketball Card Hobby Box is one of the best buys in the Junkl Wax ERA. Not only is the popular Shaq Upper Deck rookie card in reach but Michael Jordan has three or four cards worth grading. BUY NOW, BUY HARD. 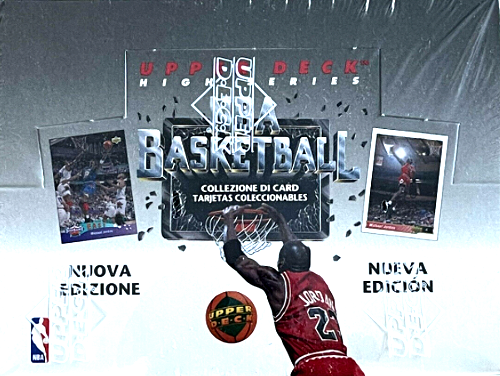 1992 Upper Deck Basketball would come out when card companies were printing a high volume of cards aka Junk Wax ERA. Upper Deck had tremendous success with creating the 1989 Upper Deck Ken Griffey Jr. baseball rookie card and wanted to continue that same success by developing other sports cards at a high volume as well.

At the time of the 92 Upper Deck Basketball release, these cards saw a high demand, especially the big star players like Michael Jordan, Shaquille O’Neal, and more.

Once collectors eventually learned that these cards were massively overproduced they quickly decreased in value which caused the sports card market to burst within the next couple of years.

Eventually, the market would bounce back due to professional grading companies creating the supply and demand factor again grading cards with a rating based on 1-10.

This meant that even cards that were massively overproduced and ungraded similar to the 1992 Upper Deck Basketball set could have value again if the cards received a high-grade example. 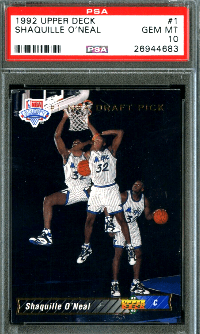 Shaquille O’Neal was card number one of this set featured from 1992 Upper Deck. Shaq at the time of this release was receiving tons of hype when he first entered the league. This card turned out to be very condition sensitive, in fact, according to the PSA Population Report, just 323 have received PSA 10 examples.

Shaq is regarded as one of the most dominant centers in the history in the NBA and is a cultural phenomenon. He is still very relevant today appearing on TNT as an NBA analyst.

This card is very sought after in a PSA 10 example, some have sold as high as $3,000 in value. Investing in a PSA 9 example is your next best option especially with the 10’s already being fairly pricey. This card ranks first as the most valuable in this set. 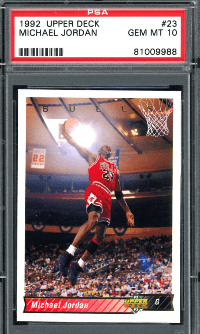 Michael Jordan was card number 23 of this set, similar to the Shaq rookie card number one a large quantity of these cards was massively produced.

This card graded in a PSA 10 example sells for $3-400, only 757 are featured in that grade. It’s a nice addition to add to any MJ collection. A good alternative option would be investing in a PSA 9 example. 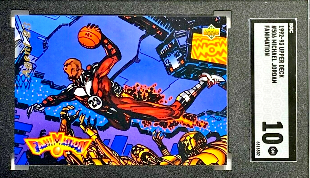 Michael Jordan during the 1990s featured a number of unique insert cards.

This card was one of his first insert-looking cards featured him.

Jordan collectors are often chasing unique cards of him similar to this one.

The card in a PSA 10 example features a low POP of just 207 examples. This card is continually trending up in value and becoming tougher to find.

Upper Deck was way ahead of its time when the created this one especially with so many Jordan insert cards being created after this one was released.

This Fanimation card of Jordan is still very underrated and relatively unknown compared to many other MJ inserts.

This card ranks as the third most valuable in this set. 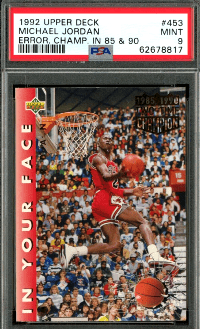 This card featured both an error card version and a corrected version. The error version is much rarer and sought after.

The difference between the error version and the corrected version is in the top right corner.

This is in reference to Jordan’s slam dunk championship.

Both versions are good investments but the error version is unique in the sense that it created a supply and demand factor for many collectors and buyers.

Shaquille O’Neal was so popular at the time of this release that Upper Deck decided to make two rookie cards of him. This version was known as a redemption card, which meant it would be sent to you at a later time.

This is a must-have for any Shaq collector or buyer, these will continue to become tougher to find in high-grade examples. This card ranks as the second most valuable in this set.

This card features both Michael Jordan and Larry Bird on it. The card reminds me of an early Marvel insert/designed card from the early 1990s era. A very obtainable card still for most collectors or buyers even in a high-grade PSA 10 example.

This one should continue to trend up more in value. You could somewhat consider this card an insert card of Jordan or Bird as well. 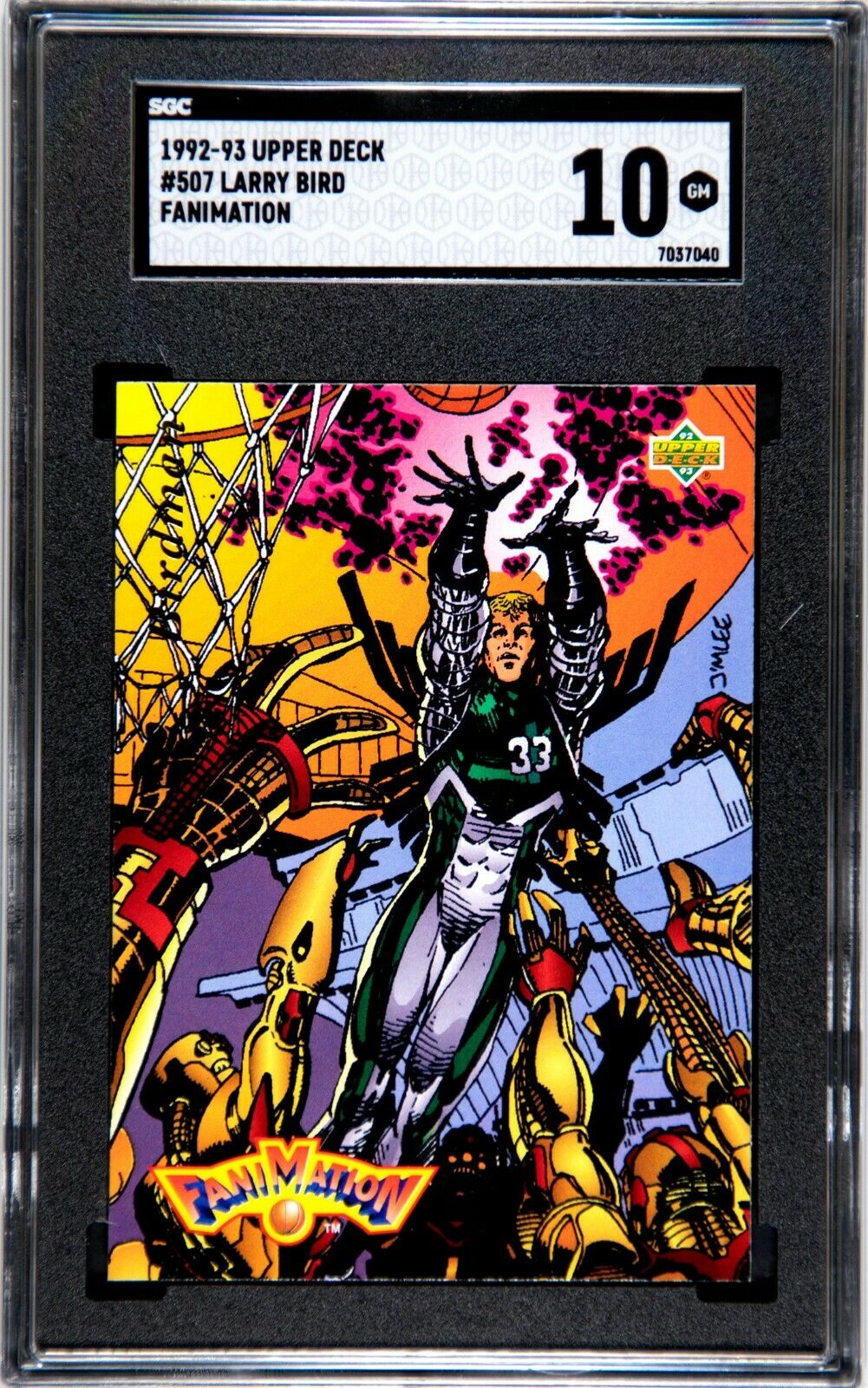 Larry Bird got his own Fanimation card featured from 1992 Upper Deck as well which is card number 507.

This one is also similar to a Marvel card design and appears like a superhero card of Bird. This card is tough to find in high-grade but still very obtainable and affordable for most buyers and collectors. A card like this would be a nice addition for any Larry Bird collector.

Alonzo Mourning’s Upper Deck rookie, card number two is another Hall of Famer from this set. This card is similar to Shaq’s rookie especially since Mourning’s rookie has a relatively low PSA Population Report. Only 172 of these cards received a PSA 10 example.

Mourning’s rookie grade in a PSA 10 example is a great value buy right now, this is a card that could easily double in value again. The NBA is naming its best 75 players of all time in honor of its 75th season this season and Mourning has an outside shot to be named to the list.

Mourning’s card was one of the biggest increases in value earlier this year but has since come way back down in value, now is a great time to buy Mourning again, especially in a PSA 10 example.

This card is regarded as his PSA Hall of Fame rookie Registry card and for that reason, it will always have great long-term value. This could even be a great buy-in bulk option since PSA 10’s are very limited. 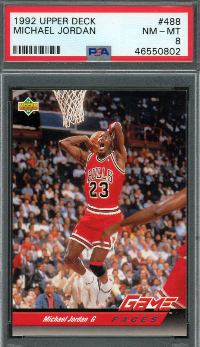 This card of Michael Jordan is very undervalued in a PSA 10 example. Only 262 of these have been graded a PSA 10 example. This would be a great addition to any Jordan super collector, even investing in a PSA 9 is not a bad option as well.

Alternative investments like this of Jordan should continue to trend up in value over time especially because Jordan will always be regarded as one of the top players in NBA history. 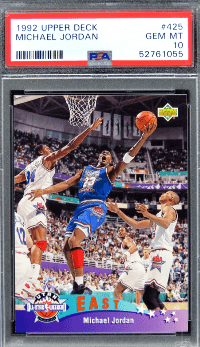 Michael Jordan is also featured in the all-star-themed card which is card number 425. This card is a little more pricey in a PSA 10 but seems very obtainable in a PSA 9 example. 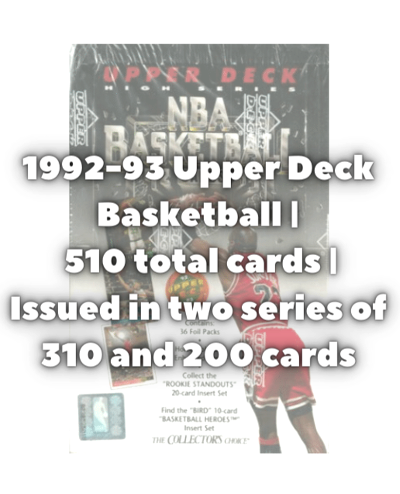