That isn’t to say that there aren’t some gems to be found when looking at PSA 10 versions; it’s just that the majority are worth little compared to other options from the era. That said, several viable long-term investments can be found within the set.

We’ve included information about eight of the best 1990 Upper Deck Hockey cards if you’re hoping for potential investment pieces and a checklist for the Superstar Hologram insert.

The first-ever Upper Deck hockey release, the set has 550 cards in total. The company aimed big and was boosted by a substantial collection of rookies making their NHL debut that year.

The first 400 are known as the ‘Low Series,’ and the final 150 make up the ‘High Series’. They were boxed separately, although High Series packs have all 550 cards.

It’s also worth mentioning that 1990-91 Upper Deck French has the same checklist. There’s a slight discrepancy in value between the two sets, while the French cards used to sell for a significant premium as they were mistakenly thought to have lower print runs than their US counterparts.

Mario Lemieux is a Pittsburgh Penguins legend who brought the franchise out of bankruptcy in 1999. He was just as important on the ice, which is how his base card from the UD set takes the first spot on this list.

The only US rookie card to feature Le Magnifique, it features a simple action shot of the player, while his name and position are found on a yellow tab at the bottom. 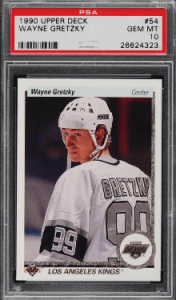 One of several Wayne Gretzky cards included in this set, the #54 base version is often disregarded due to the Superstar Hologram inserts, which feature the player heavily.

While the 1990 UD base card will never match up with his 1979 RC, it’s still one of the better cards when looking at gem mint versions. It features a close-up action shot of the player, with his face and shirt number on the show. The ‘French’ version is often preferred by collectors and can be identified by the bilingual text found in reverse.

Felix Potvin is best known for his run with the Toronto Maple Leafs, where he helped the franchise to some deep playoff runs in the early ‘90s. He missed out on the spot in the HoF, which is a slight disappointment for collectors, but it does mean that RC from the set is one of the more affordable pieces when looking at gem mint copies.

Instantly recognizable due to his custom helmets, Curtis Joseph retired with the most career wins (454) of any goaltender in NHL history who never played on a Stanley Cup-winning team.

The debate surrounding his Hall of Fame credentials continues to rage on, and he missed another chance to be inducted in 2020. His RC prices would jump if he were to be considered, but goaltenders have been habitually overlooked.

Ed Belfour is a name that should be familiar to collectors in their 30s. Another goaltender, this time we’re looking at a Stanley Cup winner, who also won an NCAA championship and an Olympic Gold medal with Canada. His card is in the ‘Star Rookie’ subset, with a small logo in the bottom right corner.

Next up is Sergei Fedorov. The first player to defect from the former Soviet Union to play in the NHL, he went on to win the Hart Memorial Trophy. Fedorov’s card is in the ‘High Series’ Young Guns subset. The card shows Sergei battling for the puck in front of the net and has a classic Young Guns graphic in the bottom right-hand corner. 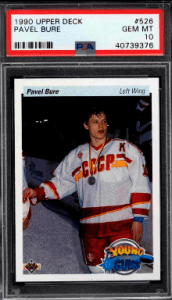 Pavel Bure is another big name from the era and recorded 60 goal seasons in 1992 and ‘93. Why does he earn second place on this list compared to Belfour? This was the first time we were introduced to the UD “Young Guns” cards (Bure and Fedorov were the first two players chosen). 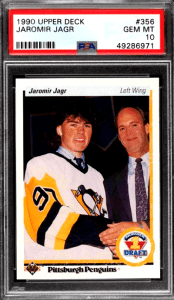 If you’re looking at RCs from the 1990 UD set, Jaromir Jagr is the undisputed king. He’s associated with the Penguins due to spending 11 of his 24 NHL seasons with the franchise.

He scored 439 goals and 640 assists for the team, while he’s still an active player as of 2021. Any collectors over 30 will likely have fond memories of the card itself, which has finally become good for long-term holders.

The Superstar Hologram set is the only insert included in the 1990 UD release. The nine-card collection features Wayne Gretzky, Steve Yzerman, Brett Hull, and Mark Messier. They give the impression of movement when tilted sideways, which makes for a slightly outdated design in the present day.

Unfortunately, many have failed to retain any value, especially compared to the cards we’ve listed above.

This is a massive set of cards like many of the sports cards in the 1990s and in particular, Upper Deck Hockey.

1990 Upper Deck Hockey is one of the more affordable sets from the early stages of the decade.

Despite the notable quality of the cards, options are abundant, even when looking at higher grades.

The junk wax era is to blame, as card companies began to produce millions of copies. This caused supply to exceed the demand and is the reason for lower prices in the here and now.

However, grading has led to a resurgence of interest in junk wax cards and packs, and this set is no exception, thanks to the high quality.

It also happens to be packed with some of the biggest stars and complemented by a strong rookie class.

Adding Young Guns proved to be a masterstroke, even if the Superstar Holograms have failed to live up to the hype.

There are so many iconic cards in the 1990 UD Hockey collection, and the options to make this list could be some of the better investment pieces in the next decade.

How much is a 1990 upper deck complete set worth?

A 1990 Upper Deck Hockey complete set has recently sold on eBay auctions for around $10 to $12 (plus mailing cost).

How much is a Wayne Gretzky 1990 card worth?

Are 1990 hockey cards worth anything?

How do I know if my hockey cards are worth money?