The 1990-91 Pro Set NHL Stanley Cup Hologram is one of the more popular and rare hockey inserts of all time.

UPDATE: We have now opened 5 cases of the 1990 Pro Set Series One set and have not seen this card. If anyone knows the average pull rate on this card per set please post in the comments.

The “Holy Grail” of hockey card inserts is a big deal for anyone whos lucky enough to pull this bad boy.

As the chase card from a collection packed with strong rookies and a massive checklist, it’s still reasonably valuable over 30 years on from its original release.

Here’s everything you need to know about the 1990-91 Pro Set NHL Stanley Cup Hologram, including the history of the card, and its investment potential.

We’ll start with a brief history of the trophy, the set, and the card itself.

The Stanley Cup is awarded after an annual play-off for the National Hockey League and has been going since the 1892–93 season. This makes it the oldest existing trophy still in use in North America, and the most prestigious in the sport.

Known as ‘The Holy Grail’, the Montreal Canadiens have won the Stanley Cup 24 times, which is the most of any team. As you might expect, it’s not featured on cards often, especially not as the sole focus.

The 1990 Pro Set was the first hockey release from a trio of new challengers, as Upper Deck, Score, and Pro Set joined the established Topps and O-Pee-Chee (OPC) in a battle for supremacy.

Pro Set actually released their first-ever football cards in 1989, in what proved to be a popular collection. They were superior to Topps cards in a number of ways, such as highlighting a strong rookie class.

They built on that foundation with the release of the 1990 Pro Set Hockey collection, although they absolutely flooded the market with their products as they contributed heavily to the junk wax era over the next few years.

Meanwhile, the brand was revived in 2021, having been brought back by Brian Gray and Leaf Trading Cards.

Each of the 5,000 cards is numbered by hand, and you’d instantly know if you had one as soon as you opened a pack. The hologram reflects back in a rainbow of colors, instantly standing out compared to the other cards found in the set.

It’s a simple image of the Stanley Cup, with the name engraved into the bottom of the card. The serial number is hand-signed and can be found on a silver strip located on the reverse.

Interestingly, it’s not the most famous Pro Set hologram. That honor is reserved for the Vince Lombardi Trophy hologram that was inserted into the NFL product of 1990.

One advantage it has over the NFL holo is that the football card has a print run of 10,000. Again, it highlights that these were seen as tiny numbers at the time, as everyone seemed to be collecting cards for investment purposes.

One of the rarest cards from the early 1990s, a print run of 5,000 might seem excessive compared to modern standards. (Nowadays it feels like even 100 copies of a parallel is more than plenty.)

However, it worked out to a rate of less than one per case, forcing collectors to rip more packets which were priced at $1 each.

It was arguably the biggest chase card of the year, fuelled by collectors who didn’t have the internet or auction sites and were unlikely to actually see one of the copies in real life unless they were exceptionally lucky.

As one of the few collectibles to have survived the junk wax era intact, it’s worth understanding that both of the 1990 Pro Set trophy holograms have that special something that makes a card collectible.

They’re unique, and a real piece of history for sports card hobbyists. The inclusion of a serial number proved to be a masterstroke and paved the way for many sets released in the future.

As with the majority of cards released during the junk wax era, the time hasn’t been kind to the 1990 Pro Set unless you’re looking at pristine versions.

The Stanley Cup holo is an exception to the rule, especially if you’re looking to grab a graded copy or two. For example, there has been nothing higher than a PSA 8 grade awarded, and they’re popular even if they haven’t been wrapped in a case.

As for the reason why the majority of cards from the set are essentially worthless, it’s because they were produced at a time in which the sports card market was seeing exponential growth.

Question Time: How much would a Black Label BGS 10 or PSA 10 graded 1990 Pro Set Stanley Cup Hologram sell for? Comment below!

Supply simply exceeded demand, and numbers of collectors have dwindled from the millions seen during the height of popularity for the hobby.

As for the Stanley Cup card, values have held steady, vastly exceeding the likes of the 1990 Pro Set Hockey #632 Jaromir Jagr RC.

The majority of 1990 Pro Set Hockey cards failed to stand the test of time, as they were overproduced to the point where the majority are worth next to nothing.

Then there’s The Stanley Cup card. It may have a large print run at around 5,000, but they were released over 30 years ago. Many have been damaged during that period, and it’s nowhere near as plentiful as you may have thought.

That’s evidenced by the current asking price, which is far higher than any of the others found in the set.

It’s a significant card for hockey fans, and it could be one of the better investment options released that year.

With one eye on the present, the re-release of Pro Set cards should also provide a small boost, as it helps if the brand is actively selling products, and drawing eyes to their previous sets.

Considering the above, we think the 1990 Stanley Cup holo is a viable investment piece, especially if you’re willing to commit to a long-term holding strategy.

The 1990 NHL Pro Set hockey set has a mind-blowing 705 cards which is even high for the Junk Wax Era.

What set is Stanley Cup hologram in?

Are holographic sports cards worth anything?

What is Holo sports card?

A Holo Sports Card also known as a Hologram Card is a trading card consisting of entirely, or including a holographic image that is hopefully bright and crisp. 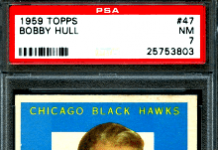