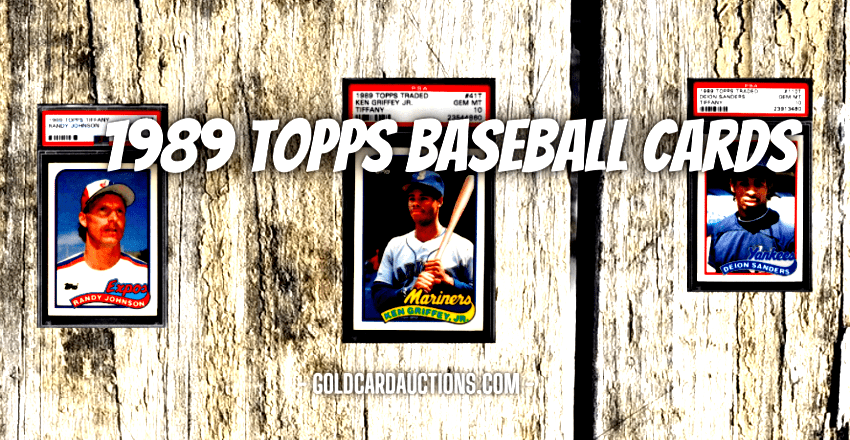 As late 1980’s baseball cards go, ‘89 was a great time to be collecting the best that Topps had to offer.

For one, some of the cards are actually worth something in the present day!

There’s the iconic Ken Griffey Jr. Rookie Card which always garners plenty of attention, joined by a variety of Hall of Famers in a massive 792-card checklist.

Here are 10 of the best Topps baseball cards from the set, along with information about the most valuable overall, common error versions, and an investment outlook.

There are a handful of standout cards from the 1989 Topps Baseball set, although the majority are worth nothing unless they’re pristine PSA 10 graded versions.

For the purposes of this list, we’re looking at the rarer upgraded Topps Tiffany cards, which come with white backs.

Read Next: 7 Most Valuable Michael Jordan Cards of All-Time

However, this doesn’t work with Topps Traded sets. Both the common and Tiffany sets have white stock on the back, so be careful. 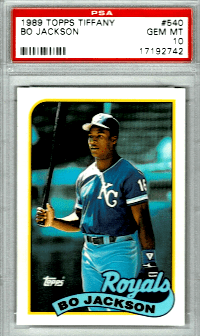 We begin with Bo Jackson (Related: Best Bo Jackson Rookie Cards), who had the potential to be one of the best two-way players of all time, if not for a serious hip injury in 1991 against the Cincinnati Bengals which ended both his football and baseball aspirations.

As was often the case with the flagship set, Topps used a great action shot of Jackson, holding a bat aloft casually.

His name and team logo are found in the bottom right corner, placed in front of the player. It has a blue hue, with a yellow borderline that helps to add some color.

An eight-time All-Star who won the World Series in 1995, John Smoltz was part of the Atlanta Braves “Big 3” pitching rotation that dominated the National League East for almost a decade along with Tom Glavine and Greg Maddux.

Smoltz’s RC is found in the base set, and he’s staring at the camera with a serious expression on his face in the profile shot.

It also sells for a serious price if you’re looking for gem mint copies of the Tiffany card.

Nolan Ryan is another huge name from the era. During his stellar 27-year MLB career he struck out 5,714 batters which still ranks 1st for most career strikeouts all-time.

His ‘89 Topps card features an action shot of the Hall of Famer mid-throw. It’s not an RC, but there are still avid collectors of every pristine Ryan card created. 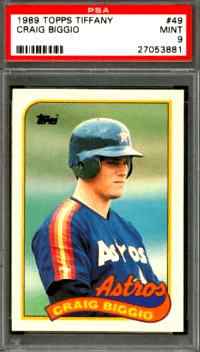 An Astros legend, defensive savant, and the only player ever to be named an All-Star and to be awarded Silver Slugger Award at both catcher and second base, Craig Biggio is up next.

As you’d expect, Biggio is found in vintage Astros gear, while his release from the base set is also an RC.

The Hall of Famer might not have the most expensive card, but it’s still one of the keys to the set.

Omar Vizquel won 11 Gold Glove Awards, including nine consecutively from 1993–2001. Despite being a multiple record holder, his ascent to the Hall of Fame has recently hit the rocks.

“In 2018, he earned 37 percent of the vote before jumping to 42.8 percent in ’19. When he received 52.6 percent of the vote in ‘20, it appeared as though he was on a steady climb to reach the 75 percent threshold within the next few years before this slight setback.“

His Topps RC is found in the ‘89 Traded set, and there are Tiffany versions which are more expensive when graded.

Having made his debut in 1982, you’ll have to head back further than this set if you’re looking for the most valuable options.

Ripken Jr. is always popular with collectors, and it’s another card found in the Topps Traded set, rather than the base release. 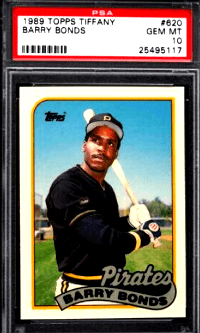 A player that needs no introduction, Barry Bonds was the home run king?, he’s the all-time leader in walks, and owns a career 1.051 OPS.

Released a couple of years on from his rookie season, Bonds was already beginning totally impressive numbers by 1989.

He won his first MVP Award in 1990, and the ‘89 Topps Tiffany features a profile shot in a batting pose, with a stadium background. 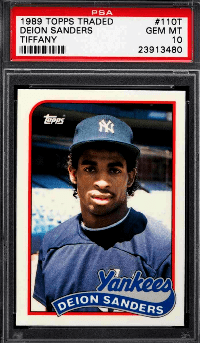 Deion Sanders played professionally in two sports, winning a couple of Super Bowl titles as well as making one World Series appearance in 1992 with the Braves. No other player in history has been able to repeat the feat.

His ‘89 baseball RC is from his time with the Yankees and has a profile image of Sanders wearing a NY cap.

One of the more popular players from the era, he eventually entered the Pro Football Hall of Fame in 2011.

Randy Johnson might have been unfortunately named, but I wouldn’t say that to his face!

“The Big Unit” is featured in an angled profile shot in this classic RC, which sees him staring off-camera.

The base Topps card is relatively easy to source, with Tiffany versions upping the rarity. Expect to pay 10 times as much for a pristine graded copy of the latter. 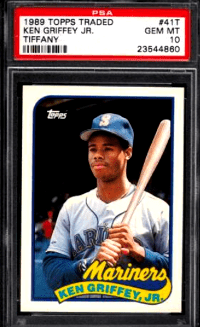 Found in 1989 Topps Traded, (and yes, there is a Tiffany version) the Griffey Jr. RC is by far the most coveted card from the collection.

It’ll take a serious chunk of change to add a PSA 10 Tiffany card to your collection.

There aren’t many surprises when listing the most valuable cards from ‘89 Topps Baseball sets. In no particular order, we’d look at;

The sets have a strong rookie class, including a handful of future Hall of Famers.

Of the cards listed, the Griffey Jr. RC stands out as the most valuable option by a wide margin.

The Randy Johnson RC has a mid-range price tag, while Deion Sanders is one of the more affordable given his legendary status.

Whether it be true error cards or color variations, the 1989 Topps Baseball set is plagued with issues.

It’s partly due to the sheer size of the checklist, while some cards even have a couple of error versions.

The list below is far from comprehensive, but here are some of the better-known error cards from the collection;

You can also check out the Trading Card Database for more information about 1989 Topps Baseball error cards.

Arguably the best Topps Baseball sets that were released towards the end of the decade, you can’t really go wrong with the 1989 collection.

“Sure, the base sets were overproduced, but high graded Tiffany cards do allow for some separation at the upper end.”

There’s a variety of Hall of Famers, ably backed by one of the best rookie cards in the sport. (Of course, we’re talking about Griffey Jr.)

If we had to make a snap decision, we’d always opt for his card over the others that made the list, especially if you’re looking for a long-term investment option that should provide a good ROI.

PSA 10 copies of the Tiffany cards are where the real money is, and there are a number of cards that are worth keeping tabs on.