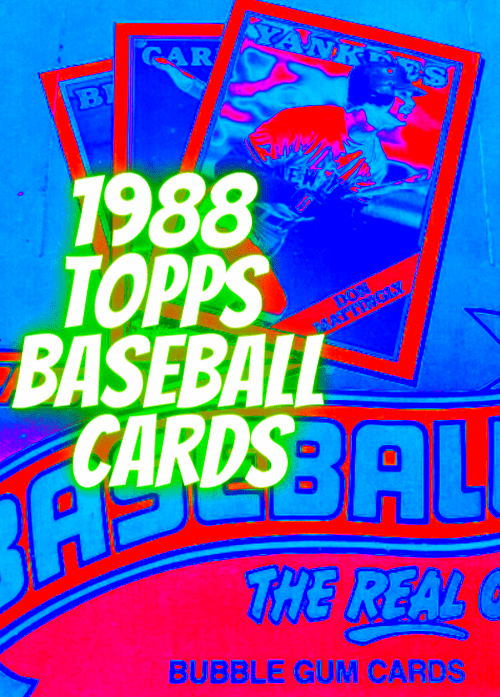 They may not be the most expensive sets by any means, but 1988 Topps Baseball cards still have a great design and a selection of Hall of Famers to choose from.

Along with the expansive 792-card base collection, we’re also including 1988 Topps Traded copies in the equation.

Here’s a rundown with everything you need to know about 1988 Topps Baseball cards, including 10 of the best options, and an investment outlook.

The vast majority of 1988 Topps Baseball cards are almost worthless today, save for the best-graded copies of the cards seen below.

The 1988 Topps card has an understated design which is replicated across the set, with a large action shot of Ripken Jr. in a batting stance.

His team name is found in large lettering which goes behind the bat, which matches the orange outer border. You’ll find his name on a tab in the bottom right corner.

Even PSA 10 copies are fairly affordable, narrowly exceeding $100 at the current time of writing.

However, it was also one of the more over-produced, even compared to the massive print runs that were common at the time.

It’s where you’ll find Ventura’s RC, which features a crisp profile shot of the player in Team USA gear.

There are also Topps Tiffany versions, which are rarer and were produced on better-quality card stock.

Jim Abbott is a pitcher who is best known for his success at the major league level despite having been born without a right hand.

Abbott is the first card found in the ‘88 Topps Traded set, and there are also Tiffany versions to keep an eye out for.

He’s featured in his Team USA jersey, in a simple profile photo.

Bo Jackson may have been one of the best two-way players of all time, if not for a serious hip injury in 1991 against the Cincinnati Bengals, which ended both his football and baseball aspirations.

His 1988 card has a great blue hue, featuring the player mid-swing in a classic action shot.

Once again, we’d advise sticking with the rarer Tiffany version, even if it’s not especially valuable.

Next up is another Topps Tiffany card, this time from the ‘88 Traded set.

Jack McDowell was a three-time All-Star who won the AL Cy Young Award in 1993, somehow finding the time to also be a professional musician.

As with the other Traded cards, he’s featured in a simple posed shot, staring ever so slightly off-camera. It also happens to be his RC.

Mark Grace is a three-time All-Star and World Series Champion who features in another RC found in the Topps Traded set.

It shows the first baseman in an action shot, with a bright red borderline.

He hasn’t made it into the Hall of Fame, but he still has a cult following as a key member of the 2001 World Series champion Diamondbacks that beat the New York Yankees.

His RC is included in the packed 1988 Topps Traded set, and the Tiffany version is rare enough to attract significant interest if you’re looking at gem mint copies.

Nolan Ryan is another huge name from the set. During his stellar 27-year MLB career he struck out 5,714 batters which still ranks 1st for most career strikeouts all time.

‘The Ryan Express’ was coming to the end of his career by ‘88, but collectors are still interested in gem mint versions of his card from the base Topps set.

The action shot features Ryan and he throws a ball, while there’s a bright yellow line around the border.

Tom Glavine was part of the Braves’ “Big 3” pitching rotation that dominated the National League East for almost a decade along with John Smoltz and Greg Maddux, while he’s a ten-time All-Star who also won the World Series in ‘95.

Glavine’s ‘88 RC would have taken the top spot on the list, if not for a rare Don Mattingly card with an unexplained origin.

Miami Marlins manager Don Mattingly is the only Yankee to have his number retired without having won a World Series with the team.

His World of Baseball card is an odd addition, and can’t be found in standard 1988 Topps or Topps Traded checklists.

In any case, it’s a worthy addition, and exceptionally rare with a sole PSA 10 graded version.

Meanwhile, there’s no logo on Mattingly’s shirt, while “NEW YORK A.L.” is written in place of his team name, and it’s placed in front of him, rather than behind him like the others.

The average card from the set is almost worthless, and many of the options listed above will only sell for a couple of dollars if they’re in poor condition.

As for why, late 1980’s sets were released during the junk wax era; a time in which print runs were upped to numbers that had never been seen before, or since.

RCs and legends make up the list of the current most valuable 1988 Topps Baseball cards, with Tiffany cards helping to create some separation.

In terms of investments, we’d stick with the Glavine RC, as you can’t go wrong with the Hall of Famer in gem mint condition. However, it is likely to set you back by at least four figures.

PSA 9 copies of the World of Baseball card could also be a viable option in the long term.

Given the sheer size of the set, there are numerous error cards found with 1988 Topps Baseball. We’ve listed a few below, but we’re only scratching the surface considering the number of cards printed.

#3 Mark McGwire – A couple of error cards, including a white area behind his left foot

#4 Eddie Murray – No caption on the front of the card

Glossy Send-Ins Offer – the insert found in the middle of packs, most of these were thrown away instantly. Originally, it was printed with the words “cards not included”, which makes no sense, as it was meant to be used to send off for cards from the Glossy All-Star set. Later editions used a large black arrow over the text or no text at all.

The Trading Card Database is a good resource for learning more about the various 1988 Topps Baseball error cards.

The base ‘88 Topps set isn’t the most memorable, with muted designs and a weaker rookie class compared to others from the decade. There are a few hidden gems, but the vast majority should be disregarded if you’re hoping for a profit.

Even PSA 10 graded copies of most cards haven’t seen much movement, and they’re unlikely to shoot up massively in the near future.

With that being said, options like the Glavine RC or even the Nolan Ryan card do have decent scope to increase in value, especially if you’re looking at gem mint copies of the Tiffany versions.

It’s true that a print run of 25,000 is massive by today’s standards, but it’s difficult to say how many survived over the last 30 years. Graded versions do help to provide some separation.

You could do far worse if you’re looking for a cheaper set from the late 1980s, even if it’s another victim of the junk wax era when all is said and done.

What is a 1988 Topps Barry Bonds card worth?

What are the most valuable Topps baseball cards from 1989?