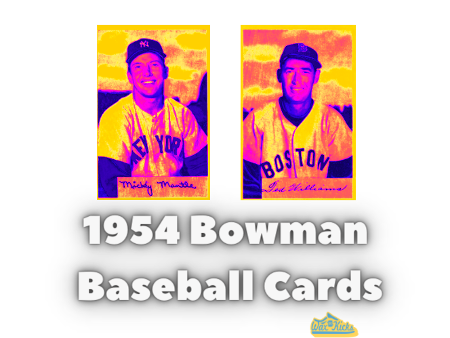 The collecting community does not regard the 1954 Bowman baseball set very well. In an arms race with the behemoth of that time—Topps—Bowman took an approach Josef Stalin would have appreciated: High volume, low-quality.

Even so, names like Mickey, Duke, and Whitey make this set an intriguing one—if only for its highest of highlights.

The 1954 Bowman Baseball set contains 224 cards. Of those cards, we’ve narrowed down the ten most valuable.

The image on the card is a schoolboyish portrait of Mantle with a whimsical grin on his face. The card reflects the airbrush-styled artistry common to the era.

The Mick wears the Yankee off-whites (no pinstripes) with “New York” sewn in navy lettering across the chest. The focus on Mickey’s torso emphasizes the broad shoulders that clubbed 534 Major League home runs.

A picturesque blue sky dotted with clouds adds to the wholesome feel of the card. In the card’s lower border is a grey-green nameplate containing a lasered Mantle signature.

Mickey Mantle is the leading card from most, if not all, baseball sets from this time period. Even lowly-graded copies of this card sell for more than casual collectors are used to spending.

Rare PSA 9-graded copies of this card are reserved for the most serious collectors and have sold for six figures.

The card shows the Say Hey Kid crouched in a starch white New York Giants’ uniform. He smiles wide with a bat held in his right hand, barely visible.

A dark background appears to be a dugout, giving this card a wholly different vibe than Mantle’s. A light blue nameplate frames a black, lasered Mays signature.

PSA 9 copies of this card do not fetch near what Mantle’s do but have sold in the low five-figure range.

One of the elite catchers of his day, Yogi Berra’s Bowman #161 shows the diminutive Yankees backstop sporting his trademark pseudo-grin.

Berra’s navy Yankees cap sits as high atop his head as a cap can sit without falling off. This photograph (portrait?) was created at the same setting of Mantle’s—the blue sky and matching uniforms give it away.

This card has the same nameplate (albeit a pink one) and laser signature of other cards in the set.

Low- and mid-grade copies of this card are abundant, and not expensive by collecting standards. Some collectors may leap at the opportunity to get a 1/1 PSA 10 copy of this card, as it is truly one of a kind.

Yankee legend Phil Rizzuto, aka “The Scooter”, brings the first set of pinstripes to our list. Crouched in the on-deck circle, Rizz rests his right hand on three wood bats, knobs cradled on his left thigh.

The limited number of PSA 9 and PSA 10-graded copies anchors this card’s value. That value, however, remains far closer to Yogi Berra’s card than Mickey Mantle’s.

The Duke of Flatbush is a legendary piece of the iconic Brooklyn Dodgers teams of the 1950s and 1960s.

Bowman has the centerfielder looking like a movie star, tanned face in the iconic white-and-blue Dodgers threads with the matching “B” hat.

A mildly clouded blue sky serves as the backdrop, a perfect complement to the Dodgers’ color scheme. This is, arguably, the best-looking card in the set.

Prices for this card may generally be in the same neighborhood as Berra and Rizzuto. A notable difference here is the population of two PSA 10-graded copies.

One of the pioneers who broke racial barriers in baseball, Roy Campanella’s 1954 Bowman card reflects someone who dealt with the trials that many racial pioneers in baseball faced.

Unlike other cards in this set that feel more like drawings than photographs, this one is an up-close headshot of Campanella, with detail that is rare for the set.

The Dodgers legend known as “Campy” (who does smile, by the way) stares stoically into the camera. A blue Brooklyn Dodgers cap sits high, brim barely bent.

A blue sky and white uniform remain consistent with the card’s overall color scheme. You’d think the olive green nameplate would clash, but somehow it works.

This is a phenomenal card, and a relative abundance (22) of PSA 9 copies means you could possibly secure one at a nice price point.

Edward “Whitey” Ford graces this card in his pinstripes, “NY” logo resplendent as he raises his hands high in an unorthodox delivery.

Ford’s face gives nothing away, the sign of a true Hall of Famer. The backdrop includes a baseball field and buildings that loom behind the stadium.

A yellow nameplate with a laser-printed “Edward Ford” autograph completes the design.

The 1954 Bob Feller Bowman #132 shows the Indians flamethrower on the dugout perch, lime green bench and steps in the background.

Chief Wahoo makes an appearance on Feller’s left sleeve, yet another relic of the past. This card feels campy in a Major League (the movie) kind of way.

Similar: The Most Iconic Baseball Card of All-Time

Feller’s presence alone gives this card value—Ted Williams once called him “the fastest and best pitcher I ever saw during my career”.

The limited number of PSA 9s is critical for the value of this card.

With the Dodgers cards on this list, you’ve got a similar theme: Dodger whites/greys, blue uniform trim, and a blue sky to match. It just works.

Reese, an iconic figure in baseball history, holds a well-worn bat over his shoulder while flashing a crooked smile. His glove-less hands are prominent in the foreground.

This is pretty standard fare for the 1954 Bowman set. Collectors may like that there are only 12 PSA 9 copies, though 3 PSA 10 copies are more than any other card on this list—with less rarity to each PSA 10, you may expect somewhat suppressed pricing.

Eddie Mathews is a fixture on top baseball card lists, and it should be no surprise that his 1954 Bowman card makes this list.

With no PSA 10 copies known to exist, the best grade for this card is a 9. The price of those PSA 9s is on par with other players on this list not named Mickey or Willie.

The 1954 Bowman set was riddled with imperfections, an accurate indicator that Bowman was more concerned with speed than precision.

As is the case with older baseball card sets (especially those known for flaws), higher grades are a rarity.

In this set, higher-graded Mantle cards cost a fortune, while higher-graded copies for even a legend like Willie Mays are significantly more affordable.

Once you get into the players ranked behind Mays, you can secure PSA 9s, and in some cases even 10s, for a very palatable price.

Bidding for many of these cards will come down to the buyer’s preference and personal connections to the player or team. Generally, though, this 1954 Bowman Baseball set is accessible to those who want a classic, albeit imperfect, card.