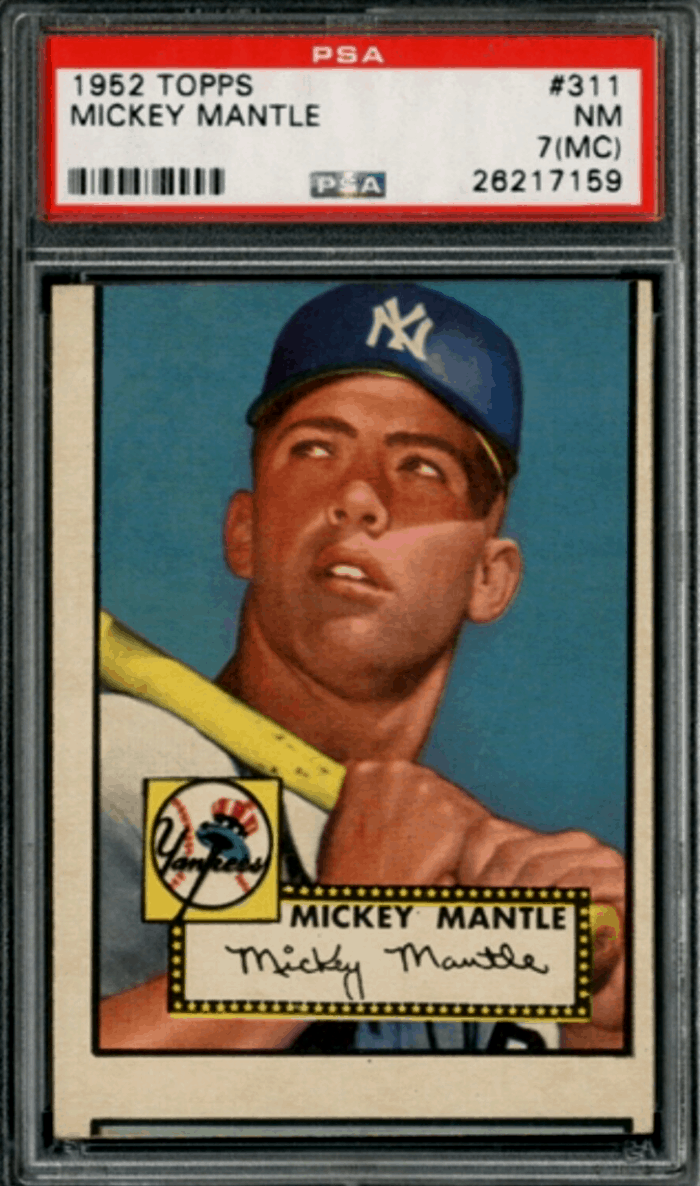 Ask any collector of baseball cards the single most significant card in the hobby and many will give you the same answer. The 1952 Topps Mickey Mantle #311 has not only become the most iconic baseball card ever made but a piece of pop culture that transcends sports altogether.

While most of the legendary sports cards are rookie cards, this one is the exception as the less expensive and less well-known 1951 Bowman card is commonly acknowledged to be his first card. However, the 1952 Topps card has taken on a much grander role than that Bowman card and is the much more sought-after option between the two.

Mantle’s card is numbered #311 in the set making it a part of the higher-numbered but shorter-printed second series. This would help drive the price up as quantity was lower than other cards printed around that time among other factors.

Mickey Mantle was born on the 20th of October 1931 in the small town of Spavinaw, Oklahoma. His journey to MLB superstar was not always so smooth as Mantle recalls wanting to quit baseball during a slump while with the Class-D Independence Yankees.

Baseball fans everywhere should count their fortune that Mantle’s father managed to convince him to stay as it would have robbed the public of witnessing one of the best talents to ever play the game.

Subscribe to our newsletter for a chance to win a hobby box of your choice in our monthly draw!
[irp posts=”8058″ name=”Mickey Mantle Rookie Card – Best Cards, Value, and #1 Guide”]

Mantle made his major league debut in 1951 after impressing during spring training. Expectations were high for the young outfielder as he had turned many heads with his stellar play, but Mantle would not only meet those lofty expectations, he would smash them.

Mantle would go on to be one of the greatest power hitters the game has ever seen. He routinely smashed balls out of the park and made superhuman acts look easy. 500-foot home runs were the norm for Mantle as he displayed a generational level of power.

Mantle also saved his best play for when it mattered most as he was a known playoff performer. He won seven World Series through the 1950s and 60s and still holds many World Series records such as most home runs, most RBIs, most runs, and most walks among others.

The Making of the Iconic Card

Mickey Mantle’s 1952 Topps card is not the only iconic card in that set. In fact, many baseball historians understand the 1952 Topps set to be the most important post-war set ever produced.

Sy Berger, an employee of the Topps company for over half a century, is credited for being one of two co-designers of the magnificent set. Berger and fellow employee Woody Gelman would create the design in Berger’s New York apartment, and they opted not to include anything that would indicate the year of the set due to the fear of sales failing.

In fact, the 1952 Topps series was not an instant classic. Boxes did not sell incredibly well right off the bat and that led Berger to have to make some tough decisions. It was 1960 and Topps was in dire need of storage space.

Must Read!: Best Topps Baseball Cards and Sets by Year

Topps had worked hard in the years since 1952 to get rid of the product that was not selling well but it was hard to find people who wanted them.

With so many 1952 Topps cards taking up valuable storage space and no one wanting them, Berger thought it would be best to get rid of them. He organized for a barge to meet them and loaded up crate after crate of these cards.

The barge then sailed out into the ocean before dumping all the cards overboard. To think about all the amazing cards that sank to the bottom of the ocean that day is heartbreaking for collectors. Yet this event has only kept quantity down today and helped keep the price high.

What Makes the 1952 Topps Mantle So Special?

As we have established, this card is almost certainly the face of the hobby (possibly alongside the T206 Honus Wagner card) and is for sure the most iconic post-war card ever made. But there are plenty of amazing baseball cards, even some with autographs and jersey patches, yet this Mantle card remains so special.

The first thing that contributes to the legendary status of this card is of course the player himself. Mantle was one of the best players the game has ever seen, but there are plenty of other legends who did amazing things on the diamond yet whose cards do not come close to this status.

One reason for that is the market that Mantle played in. New York is the largest media market in all of North American sports and the Yankees are an international brand. Mantle benefited from playing for the legendary franchise and all the extra eyes that were on him at all times because of this

Mantle was also a clutch playoff performer, something that fans love to see and identify with. Being able to perform your best when it matters the most is a quality that many admire, and Mantle embodied it more than anyone else.

The other factor besides the player that is on the card is the set that the card belonged to. As mentioned above, Mantle was number #311 which meant that his card was part of the short run, to begin with. Add on to that the fact that many of his cards ended up at the bottom of the ocean and the quantity is definitely another factor that makes this card so valuable.

The 1952 Topps set included other significant cards such as rookie cards of Eddie Matthews, a second-year card of Willie Mays, and multiple other Hall of Famers such as Jackie Robinson.

In 2018, a 1952 Topps Mickey Mantle made headlines when it sold for $2.88 million dollars at an auction hosted by Heritage Auctions. The card belonged to former NFL player Evan Mathis and was graded a 9 MINT by PSA auctions. Mathis is active in the card industry and said he was selling the card in part to help finance a new home in Tennessee for his family.

This price was more than double the previous highest price a 1952 Mickey Mantle had sold for, and as prices around the industry continue to rise it’s very possible we could see this record smashed again the next couple of years.

It’s not often that a baseball card sells for such a high price and there have only been a few rare instances of other cards selling for more such as the T206 Honus Wagner and the 2009 Mike Trout Bowman SuperFractor.

One thing that made this auction so special is the fact that the Mantle card only had a grade of MINT-9 compared to the GEM MINT-10 that most expensive auctions hold. The difference between the two in price is usually very large and it’s rare that a card with a grade below GEM-MINT would receive much attention.

Of course, this is different because of the vintage nature of the card. It’s much harder to find a card in perfect condition if it was produced in 1952 compared to 2009. According to population reports, there exist six different 1952 Topps Mickey Mantle cards with a PSA grade of MINT-9. Those other five owners must’ve been very excited when they saw the sixth sell for such a high price.

If another one of those six go to auction anytime soon, savvy high-end card collectors may want to wait for a bigger prize. There are three known GEM MINT-10 Mantle’s currently in private collections that would command extremely high prices at auctions.

After the sale of the Evan Mathis Mickey Mantle, PSA President Joe Orlando mentioned that only three other 1952 Mantle’s have ever received a higher grade from the prestigious company.

One belongs to a collector who has not revealed themselves, but Orlando has confirmed the card does exist and that the collector would just rather remain in private. The second 1952

Topps Mickey Mantle that has received a grade of GEM MINT-10 belongs to Ken Kendrick, the owner of the Arizona Diamondbacks.

Kendrick is known for his love of baseball cards and is a major player in the industry. His collection includes numerous extremely high-end cards and is thought of to be one of the finest in the world. He also owns a T206 Honus Wagner among other iconic cards.

The third PSA 10 Mickey Mantle belongs to Marshall Fogel. Fogel has amassed one of the largest collections of baseball memorabilia and his personal collection is a sight to behold.

If one of these three cards were to go to auction it would almost definitely set the record for the most expensive baseball card of all time. In fact, some have contemplated that the price could reach eight figures and while that may seem ridiculous, if baseball card prices continue to rise as they have over the past decade it would be a very shrewd investment.

The Legacy of the 1952 Topps Mickey Mantle

When Sy Berger ordered for case upon case of 1952 Topps cards to be dropped to the bottom of the ocean he did not realize that he was playing a part in creating the most iconic baseball card of all time.

The 1952 Topps Mickey Mantle, while it may look like plenty of other baseball cards, is in a stratosphere of its own. It’s the face of an entire growing industry that shows no sign of slowing down.

There are plenty of special baseball cards but none quite like this one. The three that exist with perfect grading maybe some of the most valuable cards and if one of them reaches the market during this buying climate we could potentially see the first sports card sell for eight-figures.

Mantle is a legend of the game and not one that will be forgotten anytime soon. The legacy of this card has outlived Mantle himself and will continue for much longer.

The Mickey Mantle Topps 1952 rookie card is an iconic card and is an easy buy at PSA grades 3 and above… lower grades are probably still good purchases in terms of ROI but they are just so beat up looking at those grades in our opinion.

Need advice? Hit us up at advice@goldcardauctions.com.