Considered by many hobbyists to be one of the most important releases in baseball history, the 1952 Topps Baseball Card Set is the pinnacle of post-war collectibles. 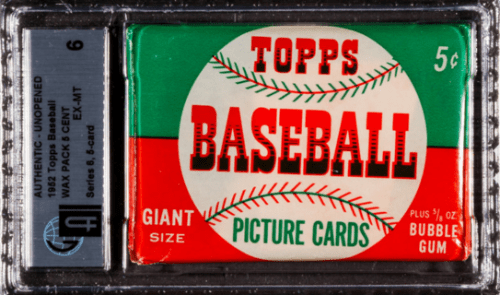 Please note the 1953 Topps Baseball cards set was a hell of a set as well but nothing compared to the legendary 1952 Topps).

It includes “The Holy Grail” of baseball cards, but why is it so special, and which cards should you be on the lookout for?

As well as a full checklist and valuation for the set, we’ve listed three of the best 1952 Topps cards, along with lots of additional info about how and why it became so legendary. 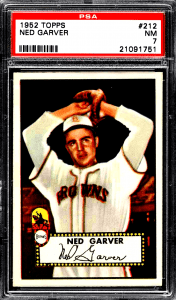 After dipping their toes into the market with a couple of 52-card collectibles in 1951, Topps decided to go all in the year after.

They created a massive set with 407 cards in 1952, packaging the product with bubble-gum in an effort to increase sales and interest.

The 1952 Topps set was issued in six different, consecutively numbered releases, with the first being 1-80, and the last numbered between 311 and 407.

The latter is known as the “high-number” series, renowned for being exceptionally rare for the time.

Each release saw fewer cards, so the higher the number, the more expensive, or at least that’s true in theory.

Topps and Bowman were vying for supremacy in the collectible market, so Topps made their cards stand out by rejigging the size, as well as adding a portrait image of the player on the front, with stats and player info located on the back.

If it sounds familiar, it’s because almost every modern set has copied the 1952 Topps edition in some shape or form.

It paved the way for the modern hobby, and with 407 cards, it contains every big-name player from the era.

There are no two ways about it, most high-numbered 1952 Topps cards are valuable, especially if they’re still in a decent condition almost 70 years on.

That’s not to say that there aren’t affordable options at the low end.

Take Bill Dickey, who was a 14-time World Series champion with the Yankees.

A PSA 8 grade of his 1952 Topps was sold for $3,120 by Heritage Auctions in March 2020, which is a world away from the seven-figures you’d need to add a good Mantle copy to your collection.

Why are higher grades so expensive?

The printing presses used as the time led to a number of errors and misprints.

Even Mantle’s cards sometimes have a darker skin tone due to oversaturation, while others have no black border around the team logo.

145 further variations have been identified, increasing the overall value of the set in recent years.

In terms of investment strategies, you could look to build a set with the higher numbers, or aim to snag some of the lower-rated (20-80) cards that are reasonably undervalued.

However, the first 15 are difficult to find in good condition, while the first series of cards had the most printing errors overall.

The 1952 collection was reprinted by Topps in 1983, although they’re worth a fraction of the price of the originals.

Topps also missed out on a few contracts in the 1980’s set, so there’s an affordable option compared to the real thing. 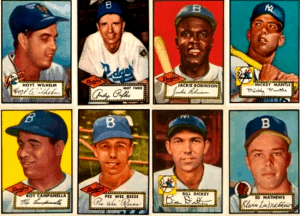 With so many cards to choose from 1952, Topps Baseball Cards set it can be difficult to identify which are the ‘very best’.

The higher the number, the greater the likelihood of rarity, which goes some way to helping to sift through the various options.

We’ve listed three of the best 1952 Topps cards below, based on career stats, interest, value, and recent auction data. 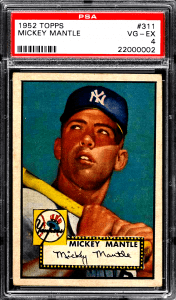 One of the most iconic cards ever produced, almost any copy of the 1952 Topps Mickey Mantle rookie card regularly gets over 100 bids at the auction, making it exceedingly popular.

We’ve already mentioned the high-graded versions that have sold for seven figures, but what makes it so special compared to the others in the set?

Ironically, there were too many unsold by retailers back in ‘52, so they were returned and eventually sunk from a barge in the Hudson River to make room for releases in 1953.

It’s crazy to think that millions of dollars’ worth of Topps Mantle cards were thrown away, but it led to the scarcity we see in the present day.

The image sees Mantle with his trusty bat clutched in his hands.

Mantle’s Yankees hat and the bright background make it easy to identify, while fewer than 10 have earned a PSA 9 grade. 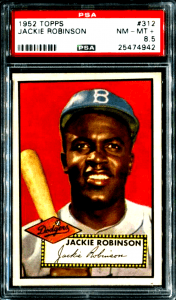 The next in line after Mantle numerically, second baseman Jackie Robinson’s 1952 Topps is another key option in the sixth sheet.

That makes it rarer than most, despite being one of the three double-printed 1952 Topps high numbers cards along with Mickey Mantle and Bobby Thomson.

It features a deep red background, with Robinson smiling widely with a bat strewn over his shoulder.

It may not be his rookie, but it’s notable for being the first card that Topps issued of the man who broke the color barrier in major league baseball.

Double-printing hasn’t affected the price of his 1952 Topps.

Instead, it has worked to enhance its reputation thanks to a strong association with Mantle, making it another strong investment piece to look out for. 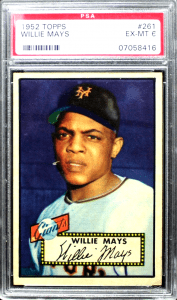 His RC might have been released a year earlier, but you won’t be disappointed with the first-ever Topps card to feature Willie Mays.

The legendary Giants outfielder was coming off an NL Rookie of the Year season in 1951 but missed most of 1952 and 53’ after being drafted by the U.S. Army during the Korean War.

He returned in 1954 to win the World Series and was a 24-time All-Star during a storied career.

His Topps card comes with a deep purple background, as Mays stares down at the camera with a stern expression on his face.

It typically suffers from poor centering, which lowers the average grade to some extent.

However, it also helps to boost the value of cards with higher grades, making them more enticing for investors and collectors.

How much is a 1952 Mickey Mantle card worth? Varies depending on the grade. A PSA 9 recently sold for a mind-blowing 2.5 million dollars. A PSA 8 sold for $428,000 and a PSA 5 recently sold for $52k… in other words, you will need some real cash to buy this legendary rookie card.

What Topps baseball cards are worth money? All of them! Even the worse players are worth a decent amount of cash at high grades (i.e. PSA 10) as collectors are obsessed with completing the set.

How can you tell if a 1952 Topps Mantle baseball card is real? Please read “How To Spot A Fake 1952 Topps Mickey Mantle Card” by AllVintageCards.com… this is a very extensive write up on how to ID a fake 1952 Mantle… cheers! 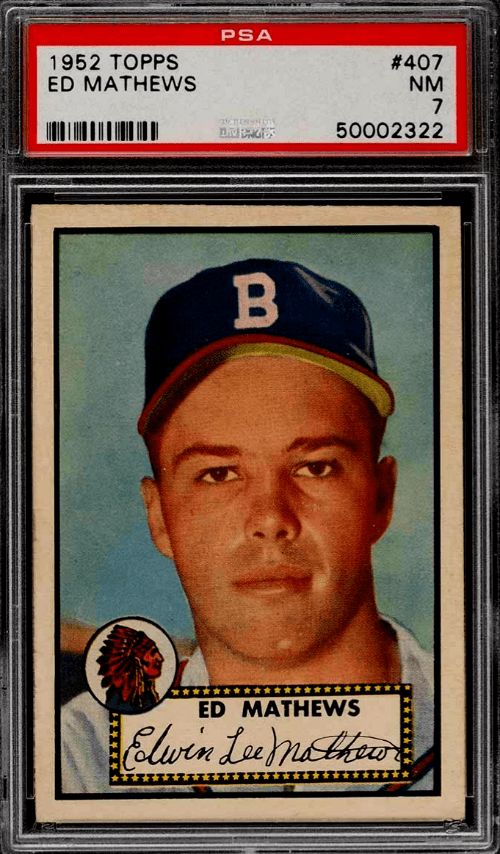 With 407 cards altogether, the 1952 Topps collection was the largest when it first released.

When you take into account variations including printing errors, there are 552 cards in total if you’re hoping to complete one of the most difficult sets in the history of the hobby.

The estimated cost is over $200,000, so it’s a near-impossible task for many collectors.

The base cards are numbered as follows: 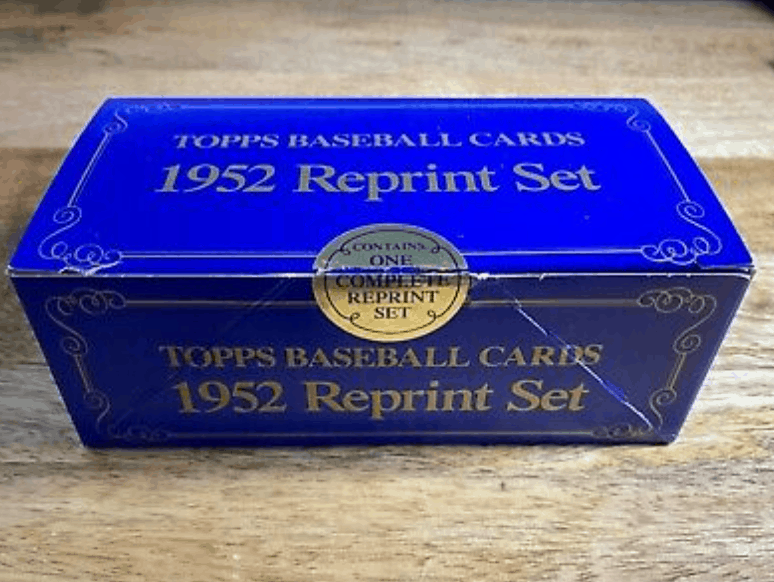 The 1952 Topps Baseball Reprint Set offers an affordable alternative to the real set which would cost a small fortune.

The 1952 Topps Baseball Reprint Set is another way to enjoy the first-ever issue from the company and with complete sets available for around $150-350 on eBay. 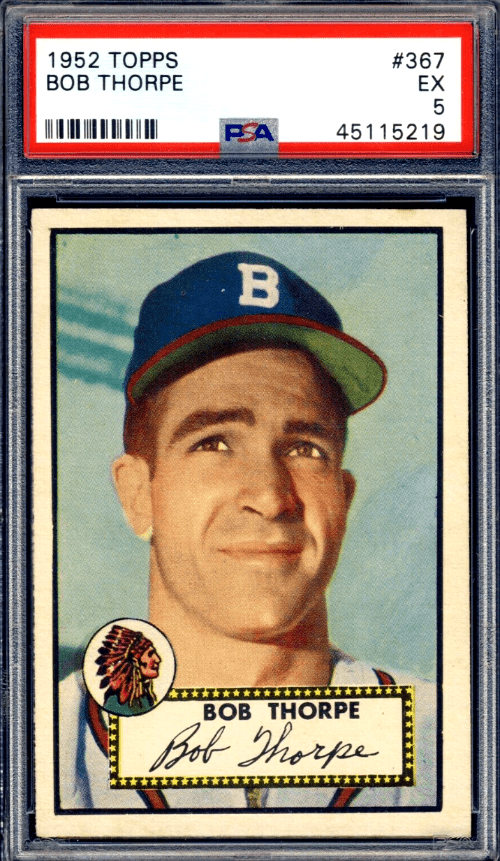 Considering the age of the cards and their innovative nature, it’s easy to see why they’re so expensive in the modern-day.

Most people had no idea that the cards would be worth so much in the future, while the gum packaged with the cards was also known to cause damage if it was left together for too long.

After all, they were originally distributed in 1c and nickel packs, with the latter being tougher to find in the present. (A high-grade unopened pack is worth roughly $15,000 today.)

Everything from the style to the era is dripping in nostalgia, making for one of the best baseball sets ever to be released.

With 407 cards in the set, an ever-increasing rarity, incredible prices, the inclusion of signatures along with player stats and info, and beautiful, colorful cards, it’s no wonder that the 1952 Topps set is highly regarded in modern collecting circles.

With the benefit of hindsight, the gamble clearly paid off for Topps, and it’s unlikely that the hobby would be anywhere near as popular without the release of their classic 1952 set.

It’s an expensive endeavor if you plan to collect them all, but you’d expect nothing less considering it’s one of the most important baseball sets in the history of the sport.

1952 Topps Baseball Cards for Sale or Auctions at…

The two shops listed above are your best shot at finding a 1952 Topps baseball cards unopened box or pack.

You might be interested in the rise and fall and rise again of baseball cards, or the best vintage T206 cards for further investment options